Theatre Marches on!  See what I…oh, never mind.  Let’s just get a jump on what’s happening in March, starting witht he fact that there’s only the first of the month left to catch ENRON at the NAC Studio, and more importantly (for me) the TROIS (THREE) mini-festival at Arts Court Studio, featuring GRIMprov in the gloriously goofy START START ENERGY OFFICERS, May Can Theatre‘s harrowing WHAT ABOUT HORSES?, and Dead Unicorn Ink‘s ensemble dramedy ACCEPTABLE APPEARANCE THEORY, co-featuring myself and the OTS Orphanage Players!  Come on out, enjoy 3 beers for 10 bucks, and watch 3 cool shows!!

Oh, and some other stuff is happening too…

UNDERBELLY at the Gladstone Theatre, from Black Sheep/Stars and Hearts.  An unmissable adventure into the mind of William Burroughs, courtesy of the amazing Jayson MacDonald!  Until the 8th.

HALF LIFE at the Ottawa Little Theatre. A meditation on memory from the kids at LOT.  Until the 8th.

THE BALD SOPRANO at Academic Hall, from Unicorn Theatre.  Martin Glassford helms this piece’o’Ionesco over at Ottawa U.  From the 4th to 8th.

SPAMALOT at Centrepointe Theatre, from Orpheus Musical Society.  Bring out your dead!  From the 7th to 16th.

THE MAGICIAN’S NEPHEW at the Centrepointe Studio Theatre, from 9th Hour Theatre.  Some Narnia for young audiences from the 9th Hour gang! From the 12th to 16th.

MUCH ADO ABOUT FECKIN’ PIRATES at the Gladstone Theatre, from Parry Riposte Productions.  Richard Gelinas and Margo Macdonald as clowning pirates, directed by AL Connors.  Seriously, there’s no good reason to miss this, people.  The 13th to 29th.

A MIDSUMMER NIGHTS DREAM at the Kailash Mital Theatre (Carleton U), from Sock’n’Buskin.  A Shakespearean capper to the Sockies’ 70th season!  From the 13th to 15th.

DANCING WITH RAGE at the GCTC.  Real life canuck superheroine Mary Walsh brings the pain.  From the 18th to April 6th.

BREAK BEFORE BEND at Centrepointe Theatre, from Edge Youth Productions.  18th to 19th, teen musical theatre at the ‘pointe.

THE DUMB WAITER at the Avalon Studio, from Third Wall Theatre.  The 3rd Wall gang returns to the stage with some classic Pinter, in the intimate Avalon.  From the 21st to 30th.

MURDER IN NOIRVILLE at the Ron Maslin Playhouse, from Kanata Theatre.  Hardboiled fun out Kanata way, from the 25th to April 5th. 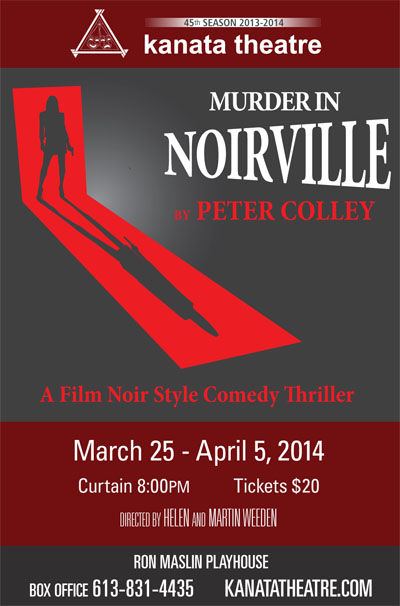 DRAMA AT INISH at the Ottawa Little Theatre, from Tara Players and OLT. Actors vs.Ireland!  From the 25th to April 12th.

A LA RECHERCHE DE ESCARGOTS/SEARCHING FOR SNAILS at Arts Court, from the Ottawa Stilt Union. I don’t even WANT to know details about this bilingual show…the imagination of the Stilters is always worth the wait.  From the 25th to 30th.

FAMILY IN A BOX at the Glebe Community Centre, from GNAG.  Multigenerational drama from the Glebe’s very own theatre gang!  From the 26th to 29th!

DEATH OF A SALESMAN at the Carleton Tavern, from Chamber Theatre.  You can’t keep a good salesman down!  Chamber’s new take on the Loman family hits the tavern from the 26th to April 5th.  And trust me, it’s gonna be worth the wait. 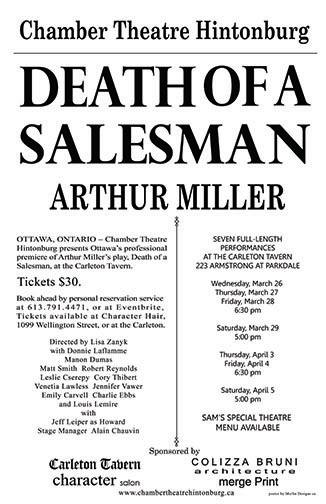 THE OTTAWA THEATRE CHALLENGE on March 27th, at the NAC 4th Stage.  Combat, theatre style! So, expect some mimework.

MARIUS ET FANNY at Salle Odyssee.  the 21st and 22nd, part of Francofete!

LEO at Shenkman Studio, from Theatre la Catapulte and MIFO. The 21st and 22nd.

I’m missing a couple things here and there and will update shortly…stay tuned, and as always, drop me a line, here, on Facebook, or Twitter, if I’ve missed anything (which I totally have).  Peace, love and soul,