Feeling pretty outta steam and wasted the last few days.  Think it might be a bit of a post-show crash following the epic theatre sprint that was my involvement in TROIS, specifically playing with Dead Unicorn Ink in THE ACCEPTABLE APPEARANCE THEORY.  Or maybe I was still sobering up following the afterparty on closing night, who knows?  Thanks again to Victoria, Patrice, Sylvie, Aaron, Ted, Kathryn, Bobby, Chelsea and Nadine (and everyone else who volunteered, and came out to actually see the show) for a wonderful time.  I’ll miss confused, bilingual Daniel, and I hope he’ll be all right without me.  Is that a weird thing to wonder?

But I clearly needed something to get my mind off things, and what better than someone else’s theatre?  Maybe someone else’s student theatre even, since my own student theatre is currently, shall we say, inoperative (scroll back through the posts for more details, I’m not going into it right now, okay)?  How fortunate that the slice of Ottawa U known as Unicorn Theatre was gearing up for opening night of Eugene Ionesco’s THE BALD SOPRANO, directed by local bigshot and excellent dresser Martin Glassford, who is also a graduate student for some local university or another, I can’t recall which.

Braving the quaintly neverending Narnian winter currently holding thrall over Ottawa, I made it into historic Academic Hall, trying desperately to avoid Warthoom’s icy glare as I crossed the room (brr!  Visitor no like Warthoom!).  Met up with Visitorium fav’rit Rebecca Laviolette, and local Improv superstar Brooke Cameron, because apparently all the cool people had turned out to see this one.  This boded well.  I hit the front row, for a sweet view of Marcelo Donato’s sprawling set, including a squint-or-you’ll-miss-it tape cassette lampshade (worth the price of admission all by itself).  Soon enough the lights dimmed, the clock sounded, and the surreal adventure began.

Describing the plot of THE BALD SOPRANO is a little like trying to catch smoke with a net, so I’m going to mostly not bother trying.  Ionesco liked to keep things a little weird, and I’m okay with that.  We start off with a seemingly well-off English couple, Mister and Mrs. Smith (James Graziano and Annik Welsh) gabbing somewhat one-sidedly about their latest meal of very English fish’n’chips. A brief interruption from their somewhat distracting housemaid Mary (Mahalia Tahririha) segues us into the arrival of our guests, Miser and Mrs. Martin (Jake William Smith and Lily Sutherland), who seem to be having trouble recognizing one another.  And then, later on, there’s a fire chief (Paul Piekoszewski), and everything goes right and properly loco. 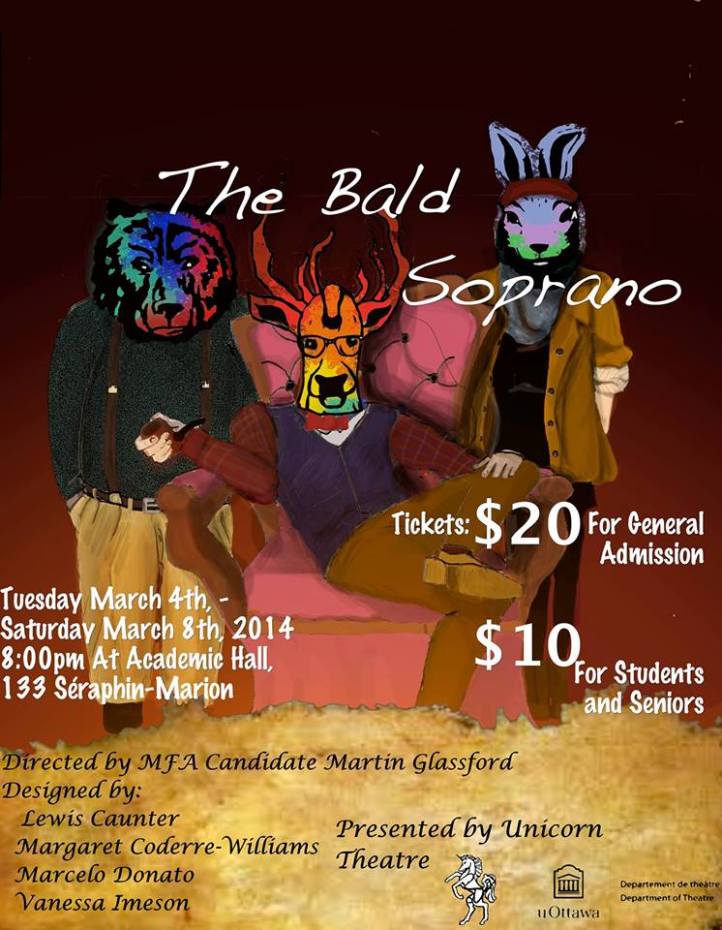 SOPRANO is a weird little ditty of a play ripe for goofing around with, and Glassford makes good and merry whimsy of the whole affair with the aid of a strong cast and some sweet design (props to my man Lewis the sound guy for some excellent soundscaping).  Graziano and Welsh as the Smiths are delightfully pompous, and Smith and Sutherland as the Martins have maybe the best non-sexual sex scene you’ll see this year, trying to remember how they know one another.  Tahririha makes an awesomely seductive narrator, slinking in and stealing the show whenever the mood seems to strike her, and Piekoszewski is a welcome blast of energy late in the game as the Fire Chief, just one in a string of odd characters in an odd play indeed.  Cool staging and fine-tuned timing are on display a lot in this show, and it’s clear the whole gang worked their collective asses off to bring this one to fruition.  Something I definitely appreciate.

The work itself is a meaty little meditation on the nature of communication and observation, and I leave you to make of it what you will…but you could do a lot worse with your chilly March evening than heading off to Academic Hall and taking that metaphysical plunge for yourself.  I had fun, I can tell ya that much, and that’s good enough for me.  You still have a few days to make it out.  So, you know, do that. Peace, love and soul,