Before getting disappointed by Santa, treat yourself and yer pals to some awesome theatre instead!

POMMES AND ‘RESTES: SHIPWRECKED! ON THE TEMPESTUOUS LOST ISLAND OF NEVER, at the GCTC from A Company of Fools. Ottawa’s legendary clown duo return, and bring some of literature’s greatest characters along for the ride. A wonderful and foolish adventure, take it from me. Until the 14th.

THE GLASS MENAGERIE at the Gladstone Theatre, from Bear and Company. Tennessee Williams’ classic gets a gorgeous treatment from director Eleanor Crowder and a terrific cast. Ends on the 6th.

THE RAILWAY CHILDREN at the Ottawa Little Theatre. An ambitious and family friendly production to close out 2014 at the OLT. Until the 13th.

THE TEMPEST at Dunton Tower, room 2017 (Carleton U campus), from Sock’n’Buskin. Last weekend for SnB’s take on Prospero and company. The 5th and 6th.

THE TALE OF A TOWN from Fixt Point Theatre. Starting at the GCTC on the 4th, Shenkman Arts Centre on the 5th, and Arts Court on the 6th, this show will then proceed to unfold at mystery site-specific locations nearby. Unmissable. Performances at 7 and 9 each night!

A CHRISTMAS CAROL at Ottawa Little Theatre, from Dufflebag Theatre and the Ottawa International Children’s Festival. One night only on the 7th to get your Dickens fix this season!

LA CAGE AUX FOLLES at Centrepointe Studio, from Suzart Productions. I remember when this movie played in Ottawa for 2 years straight (no pun intended).  Go see why! The 4th to 7th.

THE RADIO SHOW: CHRISTMAS CLASSICS at the Gladstone Theatre, from Plosive Productions. The annual Radio show is back, with an appropriately holiday-themed collection of hits. From the 9th to 14th.

NARNIA at Centrepointe Studio, from 9th Hour Theatre. 9th Hour finishes up their CS Lewis season with n all-out musical based on the Lion, the Witch and the Wardrobe. From the 11th to 21st.

ALICE THROUGH THE LOOKING GLASS at the NAC Theatre.  A big event of a play to close out the year, featuring the NAC ensemble plus special guests!  From the 9th to January 3rd.

FREEZING at the Gladstone Theatre. A wintery musical to keep you warm over Xmas. From the 18th to January 4th.

FAIRY TALE ENDING: THE BIG BAD FAMILY MUSICAL at the Ron Maslin Playhouse, from Kanata Theatre.  Family musical fun, and it’s even Canadian.  From the 27th to 30th.

PAUL HUTCHESON’S NEW YEAR’S EVE on the 31st, presented by Black Sheep Theatre. He’s back, and he’s bringing his pals with him (including Katie Hood, I hear) to ring in the New Year! Always a fantastic time.

HUIT FEMMES at Theatre de L’Ile. Until the 6th.

– IMPROV AND OTHER STUFF
‘BOUT TIME at Mother McGintey’s, from Crush Improv Monday the 1st, featuring two all-star teams vying for your love, in a special show to raise funds for the Youth Services Bureau! 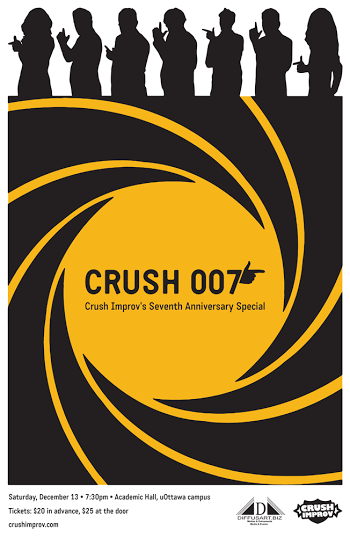 007 ANNIVERSARY SPECIAL at Academic Hall, from Crush Improv. Celebrate seven years of funny, Bond-style. Remember you can use the promo code Visitorium to get 5 buck off the ticket price if you buy in advance!

GRIMPROV at the Cock and Lion, first and last Wednesday of every month.

EFT UP COMEDY SHOW at Pressed Cafe, from Experimental Farm Theatre. More eft up fun on the 11th!

THE HALL-IDAY SPECTACULAR at the Lunenburg Pub, December 14th from Hall of Justice Improv.

CRYSTAL BASEMENT at the Atomic Rooster, last Tuesday of every month.

TONIGHT ON OUR STAGE at the NAC 4th Stage. A one-night only variety show on the 16th, with a killer lineup of talent including Dynamite Motel, GRIMprov, Feckin’ Pirates and more!

Keep checking back, I update often as new stuff (or old stuff I missed) comes along!  Peace, love and soul,