OCTOBER! Now there’s a month. Am I right? Watch, I’ll prove it…

THE PERILS OF PERSEPHONE at the Ottawa Little Theatre. Still a few more chances for some perilous theatre! Until the 4th.

THE BOY IN THE MOON at the Great Canadian Theatre Company. The 40th season opener draws to a close, so get out while you can! Until the 5th!

HEDWIG AND THE ANGRY INCH from Vanity Project, at the Gladstone Theatre. Did you miss it the first time around? Well, you’re about to miss it again unless you get a move on! From the 1st to 4th.

FISH EYES and BOYS WITH CARS from Nightswimming Productions, at the Great Canadian Theatre Company. A double-bill (including one world-premiere) from performer Anita Majumdar! From the 14th to November 2nd.

NEXT TO NORMAL from Indie Women Productions, at the Gladstone Theatre. More musical theatre on Gladstone, because why not? From the 15th to 18th.

KAFKA’S APE from Infinitheatre, at Theatre Wakefield. A little far out, but this touring production looks fantastic!!  Plays on the 17th and 18th.
THE MOUSETRAP at the Ottawa Little Theatre. Get your Agatha Christie fix. From the 21st to November 8th.

THE LAST DAYS OF JUDAS ISCARIOT at Academic Hall, from the Ottawa U Drama Guild.  Directed by artist in residence Dragana Varagic.  From the 21st to 25th.

THE IMPORTANCE OF BEING EARNEST at the National Arts Centre Theatre. The NAC kicks off with classic Wilde. From the 21st to November 8th.

THE HUNCHBACKS OF NOTRE DAME from Black Sheep Theatre, at the Gladstone. A hilarious sounding new show that ya don’t wanna miss. From the 22nd to November 1st!
JACK STRAW at the Elmwood theatre, from Linden House. A Somerset Maugham classic from the Linden gang! From the 24th-26th, and November 1st and 2nd.

THE MAGIC FLUTE at Arts Court Theatre, from Opera Lyra. Opera for young’uns, from people who know how to make opera fun. The 25th, 26th, and November 1st.

THE SHAPE OF A GIRL at the Avalon Studio, from Cart Before the Horse.  A return performance of this powerful production from early this year, and a second showing from Megan Carty this month (see the FRESH MEAT Festival, below)

GAME OF BONES, every Saturday evening at the Velvet Room, from Eddie May Murder Mysteries. Based on the popular fantasy TV show ‘Wizards and Warriors’, I think.

THE FRESH MEAT FESTIVAL returns in its third incarnation, and its third home, landing this time at Arts Court for two weekends of original shows from emerging artists around town! Ten shows for your theatre pleasure . A 20$ ticket gets you all five of the shows on that evening. The first weekend 916th to 18th) features:

TUSK TURNS ONE from May Can Theatre
GARDEN IN THE SKY from Seedling Theatre
DOUBLE DUTY from FG [squared]
BURNT OUT from Norah Paton
FASTER THAN THE SPEED OF DATING from Strange Visitations.

That last one happens to be co-created by and co-starring yours truly, and it would be swell if you’d come out and make me feel like this was a good way for me to be spending my time. It’s gonna be fun, I promise! 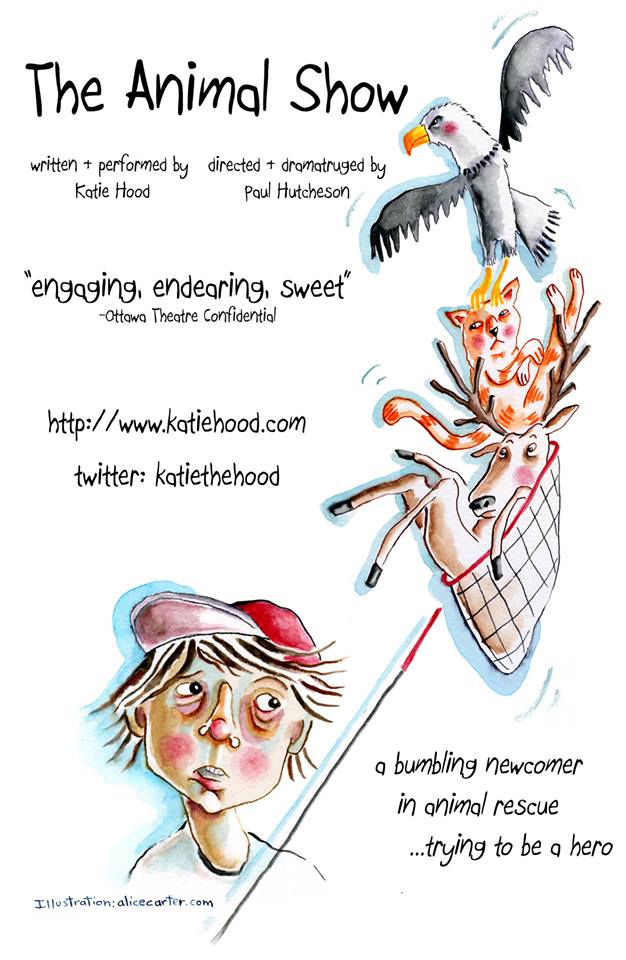 THE ANIMAL SHOW at the Box Theatre in Toronto, from Katie Hood! Okay it’s in Toronto, but it’s KATIE HOOD! From the 2nd to 4th.

FOOL FOR LOVE at the Motel Concorde, from Theatre de la Vielle 17. Only until the 2nd! Don’t miss this special return presentation!

CARTE BLANCHE at L’espace Rene-Prevost. Multidisciplinary artists strut their stuff, from theatre to visual arts and more! Always cool. The 16th to 18th.