SO wiped out right now.  A winter cold has been variously kicking my ass for weeks now.  I just finished a return-to-drudgery weekend in which I had to work practically open to close two days in a row to cover for missing workmates.  I is exhausted, yo, and I’m not sure this is exactly gonna be the bestest Foofarah ever as a result.  In fact, let’s just say it’ll suck right now, so worst case scenario you’re ready for the disappointment to come.  Are you in that mindset?  Grim isn’t it??  Here we go!

IN THEATRES THIS WEEK:

– MRS.DALLY HAS A LOVER at the A.C.T.Studio.  Extended for a whole extra week!  At the ACT theatre in Vanier, off Palace street, behind the pizza joint, through the heavy iron doors in the parking lot.  Password is ‘Contagion’.

– ALL MY SONS at the Ottawa Little Theatre.  Arthur Miller’s whimsical tale of a loving family consumed by the bitter flames of regret, but with a pretty sweet lightning effect.

– BAT BOY: THE MUSICAL at the Gladstone Theatre, from Black Sheep. Will this make me forget DOCTOR HORRIBLE was supposed to be premiering this week?  Cool people tell me that yes…yes it will.

– THE ROCKY HORROR SHOW at Kailash Mital Theatre (Carleton University campus), from Sock’n’Buskin.  Whaa?  MORE musicals this week?  Sock’n’Buskin does Frank’n’Furter, and all is well with the world.

– BLUE BOX at the Great Canadian Theatre Company, from Nightswimming and Carmen Aguirre. An UNDERCURRENTS flashback, but now in a noticeably larger room.

– CHURCH OF KARAOKE: THE MUSICAL at Shenkman Centre.  …wait, what?  Seriously, I have NO idea.  But it seems to be happening, so we’d better go.  Just a musical kinda week, I guess.

Phew…that actually took me a long time to write up (I had dinner and watched a pretty moving episode of THE FLYING NUN in there too, so I’m not totally lazy or anything).  For afterwards, here’s a band that the lovely Jen C told me to go see this weekend, and I didn’t.  But I should have, because just listen:

FRINGE:  Okay, so we’re finally out of December, widely acknowledged as the worst of all months on account of it’s as far away as you can get on a calendar from FRINGE.  But now, the countdown is officially ON.  And my loosely defined plan to see, like, twenty thousand Fringe plays this summer continues to simmer in my skull, and I’m getting increasingly concerned at how little ACTUAL PLANNING I’m doing for it.  But more on that another day.  For now I’m mostly content to sift through my huge piles of handwritten lists of Fringe lottery winners from various cities (Come ON, Victoria, you’re holding up the parade! Seriously.)  Lots of cool and exciting new performers have already got me excited to see their shows…definitely looking forward to meeting THESE clowns: 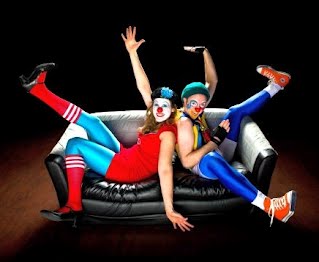 That’s Rocket and Sheshells of SMALL MATTERS Productions outta Edmonton, coming this year to Ottawa and other lucky towns along the Fringe circuit if all goes well…can’t wait!  Also, if every single human being planning on getting a BYOV in any Fringe anywhere in Canada this year could keep me updated with their status on that, it would be much appreciated. And one more question I’ve been kicking around in my head, and this is a somewhat earnest query…concerning my review format during Fringe.  Here’s a typical page of my show reviews from this last year’s Ottawa Fringe Festival:

Dazzling, witty and brilliant, right?  I know.  But here’s my question (and this goes out to Fringe performers in particular): Is that format basically okay, or would you prefer it if I broke the reviews up into their own post apiece?  Okay, they’d be shorter for sure, but it would also make it a lot easier for travelling performers to link to them, without having to add those pesky ‘halfway down the page’ riders at the top of the weblink.  And while I would miss my ‘Fringe-Coma’ posts outlining my day of Theatre, I’d sacrifice it if it made life easier for you famous actors out there (not sarcasm, btw).  So please, drop a line, weigh in, wave really loud, whatever, just let me know what you think might be better.

I had more sort-of planned to say, but I’m gonna cut out here because I’m tired, lazy, sick, and that FLYING NUN disc ain’t gonna watch itself.  Okay, my teevee fetish may be rearing its ugly head again..I’m am for sure treating myself to the complete series of THE MUNSTERS this week, not because I deserve it (I don’t), but because I kinda sorta want it (I do).  Seriously, I’ll post fanfiction here if you ask me too, I will.  Please don’t ask me.  Peace, love and soul,

Kevin Reid, aka The Visitor