Tuesday was the last day off my week of Staycation inactivity, and to be honest it was getting off to a pretty inauspicious start.  Had to do an emergency laundry run, as I suddenly realized I had left my filthy work clothes in a coiled heap in the same bag I’d brought them home in eight days earlier.  Puttered around, had an early beer that made a sneak-attack on my emotion control centers and threatened to release the mean reds in full force.  Thankfully, I pulled out in time, had some strong coffee and read a bit of science to sooth my nerves, then caught a bus downtown.  One very hearty vegetarian dinner at The Horn of Africa (recommended!) later, and I was in a much better frame of mind for the late highlight of my day…yeah, of course it was theatre.

In specific, it was time for opening night on the fourth show of the Ottawa Little Theatre‘s legendary 100th Season, with one show for every decade of their existence.  This time around it was the footloose forties making their mark, with Arthur Miller’s drama ALL MY SONS, the third time the OLT has produced this show since 1949 (which, trivia alert, is three times more than I have produced it).  Seems there was something about this tale that kept the little drama league that could coming back for more, and I was curious to see what it was.  So, after an obligatory wave to little bird Kiersten Hanly, it was off to Millertown to see what was up. 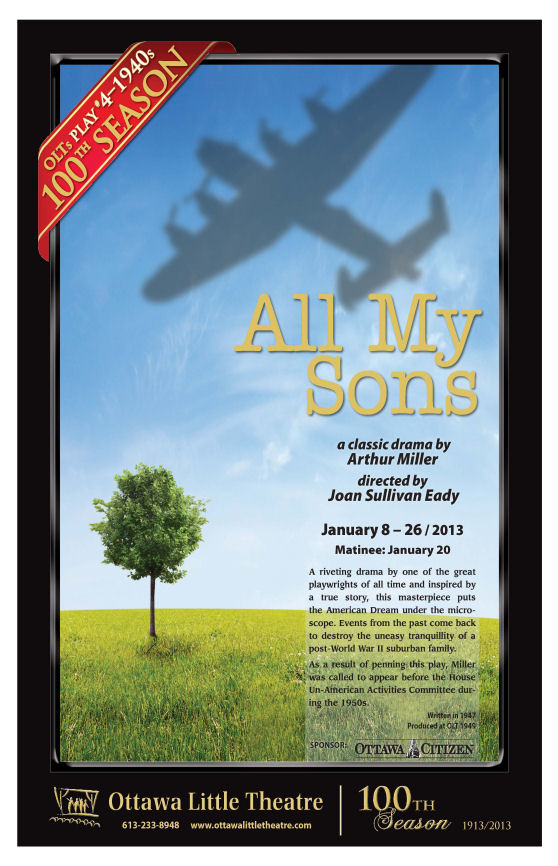 The story is set just after WWII, with both the country and our spotlighted family, the Kellers, trying to recover.  Patriarch Joe Keller (Mike Kennedy) is a friendly, gregarious sort, quick with a laugh and a smile…possibly to cover up his recent arrest and dubious exoneration on a charge of selling defective airplane parts to the US military.  Both his sons went into the war, but only high-minded Chris (Patrick McIntyre) came back…Larry was reported MIA three years ago, and his strong-willed Mother Kate (Cheryl Jackson) refuses to accept the possibility that he might be dead, no matter the odds.  Larry’s old flame Ann (Anne van Leeuwen), and incidentally the daughter of Joe’s old partner who ended up taking the fall for those airplane parts, is back at their home for a visit at Chris’ urgings.  Love may be in the offing, but some people are having trouble letting go of the past (including Ann’s brother George, played by Danny McLeod in an explosive second act appearance).  While a little comic relief is provided by daffy next-door neighbours Frank and Lydia Lubey (Paul S.Washer and Krysta Matthews), the tone of the play tends to darken as it progresses.  Kate and Joe’s other neighbours, Jim and Sue Bayliss (Phillip Lynch and Michele Snyder) are decidedly less with the wacky and more on the sinister side, though they too have their lighter moments.

Really, this play is Miller’s harsh look at attitudes in post-war America, greed vs altruism, and just how elastic morals can become in a society that places such enormous value on money.  It opens with a bang (quite literally) and never loses momentum from there, revelation building upon revelation, secrets crashing into confrontation…it’s easy to see why the OLT has gone back to this play more than once.  The cast provides uniformly strong performances, with many great standout moments to choose from.  Cheryl Jackson and Mike Kennedy as Kate and Joe are just stellar, consistently controlling the action on stage around the strength of their personalities.  And Patrick McIntyre as Chris is great to watch, taking the terrific, impossible struggles thrust upon his character and making them work beautifully.  It’s probably the best full cast performance at the OLT I’ve seen since LOST IN YONKERS last year, and that’s saying something.  Director Joan Sullivan Eady keeps the action intimate on a lovely Tom Pidgeon set, with typically great David Magladry lighting effects.   There was a recurring musical cue, welling up during the more dramatic monologues, that I think ended up more cheesy than effective, and maybe didn’t give credit to the work the actors were bringing to the table.  But happily that work was there and it was top-notch, and credit to all involved.  This is a powerful show, emotional and thought-provoking and never once settling for an easy answer.  The OLT gang does Miller right, and this is a great start to 2013 for them.  Though after this bit, I’ll be just fine with some Jane Austen lightheartedness next month, thanks very much.  Peace, love and soul,

Kevin Reid, aka the Visitor