It’s been a rough few days and weeks here at the Visitorium, or so it seems, so it’s always a delight to spend a night doing what I’m SUPPOSED to be doing for once…seeing some cool new theatre.  And at the Saw Gallery even..!  Oh, weird, artsy, subterranean venue, how I missed you at Fringe this year!  And it was a special enough even this particular evening, as local young theatre punks Red.Collective were kicking off their first ever full season of programming as the Saw’s resident company, which is some cool beans right there.  I became a quick fan after their kick-ass presentation of THE LARAMIE PROJECT earlier this year, so I was eager to see more from them.  And in true upstart rebel fashion, they decided to start things off with maybe the most divisive play they could find, David Mamet’s OLEANNA. 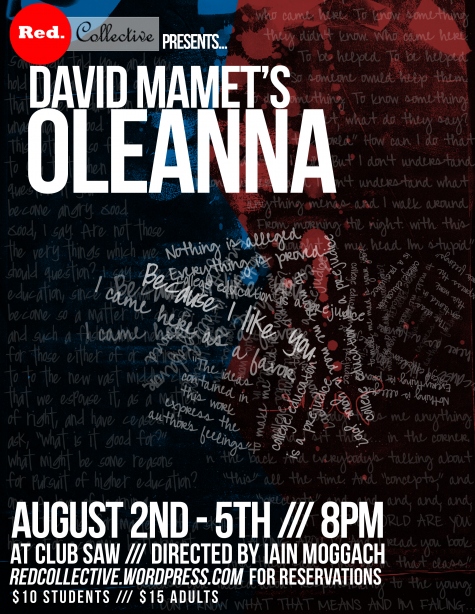 The story of the contentious (to say the least) relationship between unconventional college professor John (Jonah Lerner) and struggling student Carol (Laura Abramsen) as they go from an innocent-seeming consultation into a spiralling clash of perceptions and values that is one of the most beautifully frustrating things I’ve ever witnessed.  Director Iain Moggach solves the problem of the Saw Gallery’s infamously shitty sightlines ingeniously, placing the set in the center of the room…sneakily forcing the audience to ‘choose a side’ even before the play has begun.  And the two leads do pretty damn fantastically with the material and the dialogue, which is even more Mamet-ish than I could have imagined.  I was ready to strangle someone if they didn’t just speak a WHOLE GODDAMNED SENTENCE already!

Ahem.  But that’s Mamet for you, eh?  He’ll frustrate you one way or the other…and this is a play I seem to be having a LOT of trouble getting out of my head.  Lerner, last seen in the slightly different role of the singing and dancing extraterrestrial in ALIEN PREDATOR: THE MUSICAL, brings the self-absorbed John a practiced charm that got me on his side in the early going.  But Laura Abramsen’s Carol, who moves from shrinking violet to strong and calculated aggressor (which may not be the right word at all, at all), makes a more and more persuasive case as the play moves angrily forward, and the slightest action from either character has you questioning their motives.  I won’t say much more about it, except that Abramsen and Lerner do strong work with some of the most challenging material around…I had to do a little GLENGARRY GLEN ROSS at the OSSD, I know what a bastard Mamet-speak can be.  And of course, the dialogue isn’t the most challenging thing about OLEANNA…it’s the material itself, and the prickly issues (power, gender, education, entitlement, etc.) it not only raises, but shoves right in your fucking face and dares you not to pay attention.  Major props to the Reddies for debuting with this piece, and a great version of it at that.  Ottawa, do yourself a favour and get down to the Saw, pick a side…and watch out.  Peace, love and soul,