Okay, I know I know it was kind of a quiet month (especially on the heels of Fringe) last month, but we’ve got some cool stuff line up for this coming month, I do promise ya.  Some outside, some inside…a little of everything!

HENRY V from A Company of Fools.  Still trekking around Ottawa Parks until the 18th, and so worth a look it almost defies description.  Margo Mac’s King Harry is an absolute must-see, I can’t stress it enough. Also, tennis balls.

AS YOU LIKE IT from Bear and Company.  One week left in Bear’s Shakespeare tour, settled for the end of the run in Arts Court Theatre until the 5th.  Highly recommended, and not just because Team Visitorium’s Danielle Savoie is in it (though she’s awesome in it, as is everyone).

THE GAME OF LOVE AND CHANCE from Odyssey Theatre.  From their home in Strathcona Park, Odyssey brings on director Andy Massingham for  a masked romp that I’m betting good money will be amazing.  Runs through the 26th.

OTHELLO and A MIDSUMMER NIGHTS DREAM from the St.Lawrence Shakespeare Festival.  Both playing until the 18th out Prescott way, both fantastic fun, and both featuring Alix Sideris AND Kate Smith… why are you still even here?  Seriously, all the Shakespeare you need is going on this month.  Get out there and get your fill!

OLEANNA from Red.Collective.  Starting their run as Saw Gallery’s new resident theatre company, the Reddies are ready with some Dave Mamet to get things rolling, from the 2nd to the 5th.  Be there.

STITCHES IN TIME from Theatre Wakefield.  Playing at the Maison Fairbairn House Museum in Wakefield until the 5th , and featuring Visitorium fav’rit Will LaFrance!  Hop the train and check it out already.

JASPER STATION from Ottawa Little Theatre.  Part of the Summer Fling series, OLT presents this  Norm Foster bit from the 14th through 25th.  I think it’s totally acceptable to shout ‘NORM!’ as soon as the curtain opens.

MY NAME IS ASHER LEV from 9th Hour Theatre.  It’s directed by Bronwyn Steinberg, what else do you need yto know?  From the 15th to 25th at Arts Court Theatre. 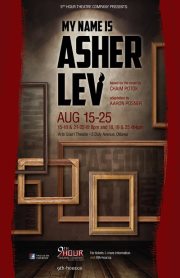 AND TREAT THE DISTANT PEOPLE WITH KINDNESS from Les Ateliers du Corps.  Billed as a collaborative, devised piece with choreography, music, text…it just sounds awesome, all right?  Three days only, the 9th to 11th at Academic Hall. Don’t miss out!

BOEING BOEING from Theatre de L’Ile.  Still running through to the 25th just over the bridge.  They had me the moment they put pretty girls on the poster.

QUELQUES HUMAINS from Theatre Belvedere.  Don’t know much about this French piece playing at la Nouvelle Scene from the 2nd to the 18th, only that French theatre is usually cool theatre.

SPACE MYSTERY…FROM OUTER SPACE! from Dead Unicorn Ink, and ALIEN PREDATOR: THE MUSICAL from Go Fly a Kite Productions. Remounting their smashing sci-fi double-bill from this year’s Fringe, the DUI and Kite gangs will be back in action at Arts Court Theatre from the 30th through September 2nd.

And there’s more!  On the 6th at the Elmdale Tavern, Crush Improv returns with another BOUT TIME battle, so get your Hintonburger ready.  And on the 9th over at Mercury Lounge, Ottawa’s best live talk show THE BRAD MACNEIL returns, starring the MacNeil himself, and Nick DiGaetano.  Also, at the ODD Studio in Arts Court, the Ottawa Dance Directive presents their SERIES DANCE #10 from the 23rd to 25th, for those of you that, like me, only had your appetite whetted by HETEROLLECTUAL back in June.

I’m hoping a few more things are gonna pop up in the next while, because there’s ALWAYS room for more theatre!  As for myself, I’ll be getting out to as much of this list as possible, wrapping up my dealings with a disgruntled wedding photographer (hopefully), and making an announcement soon about MAJOR Visitorium plans for next year’s Fringe Festival(s?).  It’s gonna be sweet, it’s gonna be epic, and it just might make history.  That’s it for me for now, I’m gonna go eat, watch some HOLMES ON HOMES, and then…what else..?  Head out to a show.  Hope to see you all there.  Peace, love and soul, Ottawa,