You Need We Want Life

This has been a kind of garbage week, I won’t lie. I’m on day 5 of a mostly unrelenting virus/sickness/blah that’s been knocking me for a dozen different loops daily.  The fever has made me sweat thru just about everything I own, and the sore throat was getting pretty epic on the pain scale.  It got so bad I went and upgraded from Halls to Cepacol, which if you’ve never tried it, is like switching from Life-Savers to Strontium-90.  I think I have holes in my cheeks now.

But, good news, I did start to feel a bit on-the-mendish tonite, enough so that I got up the gumption to head out the door and grab a dose of theatre, the bestest medicine of them all!  And what better-bestest than medicine cooked up by Prix Rideau Awards’ fav’rit son Andy Massingham, along with the grad class of the Ottawa Theatre School?  I fired out to the Natalie Stern studio at OSSD, flashing back to Andy’s show with the previous OTS gangsters, TWELFTH NIGHT, and looking forward to seeing what he’d cooked up for the new kids. 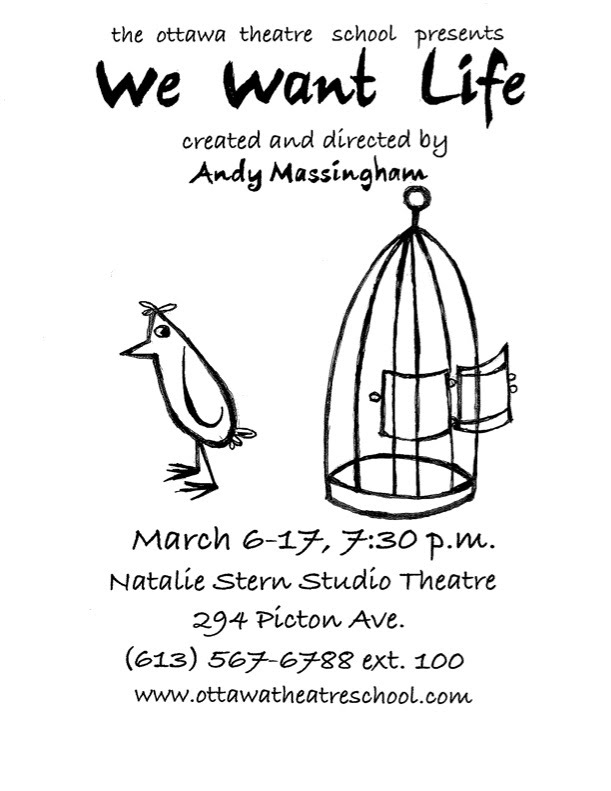 What they’d cooked up was WE WANT LIFE, based on the Frank Norris novel McTEAGUE (and the Erich Von Stroheim silent film GREED, based on the same book).  And I’m just gonna go ahead and call this one right now…THIS is going to end up as one of my fave shows of 2012.  After some solid work in Evolution’s STONE DOGS a few months back, the OTS gang steps up to the plate hardcore here, gorgeously embodying Andy’s mostly silent, dance-and-movement based adaptation.  The story is filled with love, betrayal and, yes, greed, and is told almost completely visually, most of the sparse dialogue coming from a pair of Derby-topped Tramps who sort of act as our narrators (played with great comic flair by Caitlin Corbett and James Smith).  Mitchel Rose is, I believe, McTeague (sorry, some of the names were only dropped once in the whole work, and I WAS trying to stave off coughing fits a lot of the time), a dentist whose practice…

…ah, y’know what?  This isn’t gonna work.  Sorry, I can’t do the ‘plot breakdown’ thing with this show, it just doesn’t work, doesn’t do it justice.  The story is fine, but you really, REALLY have to see it.  You gotta FEEL this one.  Mitchel’s great physical work as the lead character is just the tip of the iceberg, because the whole cast impresses. His opposite number, played by Drew Moore, matches him step for step was the slowly war over the raven haired beauty played by Jazmine ‘Jazz Camp’ Campanale (by the way, I don’t know if that IS her real nickname or not, but A) it should be, and B) it is now) and…wow, yeah, I’d fight over her too. She goes from playful to seductive in a heartbeat, and it’s fantastic.

Jonah Allingham and Dyna Ibrahim are paired together once again, this time in a delightful to watch dance of laughter and occasional light spanking, on and off throughout the show.  And Adam Pierre has a particularly great moment involving paperback Agatha Christie novels, as well as a stunning scene with Victoria Luloff’s all-too brief appearance in the play.  Honestly, the wonderful moments are too numerous to mention (and the soundtrack is fucking INSANE)…it’s funny, and sweet, and dangerous, and every little thing crazy, killer-good theatre should be.  It’s a beautifully choreographed, smartly staged and engagingly performed piece, and the house should be god-damned well packed every night from now to the end of the run.  I may even be back myself, once I’ve licked this verdammt cough.  Hats very much off to the cast and crew on a seriously wonderful show.  And apologies for how poorly written this review is (it is, don’t lie) but I’m having trouble focussing right now (still a little on the sicky side and all…but, can’t let this one wait).  Get out, go see it, tell the gang the Visitor sent ya, awright?  I’m off.  Peace, love and soul