Youth in the Reagan Years

Last night, I found myself surrounded by hyper Uni kids at a campus bar, as I killed time by sipping a pint and trying not to leer at cute girls much, much younger than me.  Sigh.  My pre-show Sock’n’Buskin routine needs work.  But what can I say, Oliver’s is cozy!

And yes, last night was time for a new premiere at the Kailash Mital Theatre, spacious home of Carleton U’s venerable gang of theatrical upstarts SNB.  This time, with the lovely and adorkable ™ Nadine Thornhill accompanying me, the show was THIS IS OUR YOUTH by Kenneth Lonergan, and directed by Iain Moggach.  And I was intrigued from the start.  First off, unlike most SNB or other theatre productions, which are usually big cast affairs, this was a rare three-hander…and set in the 80’s no less!  I remember the 80’s!  Buckaroo Banzai, Corey Hart, Bananarama…those were the 80’s, right?    I’ll be right at home in this show!

The play is broken up in two acts, both set in the squalid NY apartment of Dennis Ziegler (Geoff Burnside), a small-time drug dealer with an over-inflated sense of his own awesomeness.   Into his doped-out calm enters frantic ne’er do well Warren Straub (Luke Bradley), an eager hanger-on with some major family issues, a nasty drug habit, and a bagfull of stolen cash that has major trouble looming for the both of them.  Infiltrating Dennis’ life through sheer persistence, Warren tries (sort of) to deal with his troubles, while also trying to woo the girl of his dreams, storng-willed good girl Jessica Goldman (Emma Bromley), who seems to have everything in life figured out except for herself. 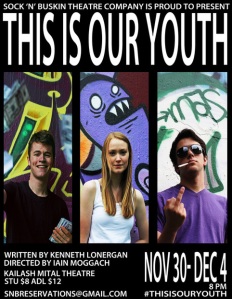 YOUTH is an interesting piece, albeit one that too often seems to have way too many balls in play at the same time.  A few too many plot elements seemed to get added just for the sake of it, and had an unfortunately diluting effect on the whole.  Luckily we had three very strong performances from some talented theatre gangsters to make up for any meanderings of the script.  All three leads impressed, and I was especially floored by Luke Bradley as Warren, who’s on stage for pretty much the entire length of the play (nearly 2 hours) and never missed a beat throughout.  A really winning and sympathetic performance, and Bromley and Burnside deliver as well as loudmouthed Dennis and nihlistic (or not) Jessica, respectively.  And the set is even pretty cool, too.

I’m calling this a nice change of pace for SnB, and while I’d like to see this script streamlined for maximum efficiency (tho there’s some great laughs and drama in there, don’t get me wrong), it’s VERY much worth getting out to see if you have the chance.  Hell, there’s even an HR Pufnstuf reference, and that’s something sorely lacking in most theatre.  Peace, love and soul, folks,