Yow, it’s a new month already!  Dang, February is short.  And as such, I feel especially ill-prepared for this months coming-uppery, but I’ll muddle thru as best I can, in no particular order:

First off, there’s exciting new shows over at the Oiving Greenboig…the GCTC is premiering  Pierre Brault’s latest, THE SHADOW CUTTER on the 8th, straight thru to the 27th.  Ya know the Brault doesn’t disappoint, especially with Brian Quirt and Andy Massingham in on this one too.  I’ll personally be volunterrorizing this show on the eve of the 12th, so come on by and I’ll tear up your ticket…with LOVE.

RIGHT after that, on the 29th, GCTC’s next production THE MIDDLE PLACE ramps up, and it too looks mighty swell.  Runs into next month til the 17th.

And upstairs in the studio starting  on the 22nd, Third Wall premieres ANTIGONE.  I’ll be there for that one on the 26th, AND I just recently got to shake hands with 3rd Wall superguru James Richardson himself, so even tho that likely means nothing to you, you should go check out this obviously awesome show anyways.  Next!

The NAC English Theatre kicks it with SAINT CARMEN OF THE MAIN from the 16th thru to the 2nd of April.  It sounds pretty cool, and is getting good buzz as it tours even now.  And you know what..?  My French is really terrible, but you should probably take a moment to check out some of the happenings at the NAC French Theatre as well.  I’m very intrigued by the original language production of LA LISTE starting on the 30th…

Ottawa Little Theatre teams up with Tara Players for the WWI piece OBSERVE THE SONS OF ULSTER MARCHING TOWARDS THE SOMME, starting on the 16th and thru to the 2nd of April.  I think it sounds like a great, late companion piece to last year’s VIMY, and I will for sure be checking it out. 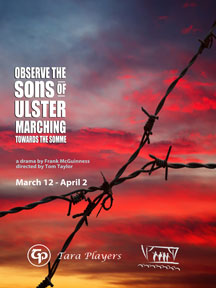 Orpheus Musical Theatre puts on INTO THE WOODS at the Centrepointe, from the 4th to the 13th, and it will be my own very first Orpheus show!  Yay to musical theatre!

A Company of Fools reminds us that march 26th is the OTTAWA THEATRE CHALLENGE at the NAC 4th Stage, and it sounds like a helluva good time.  Hope a ton of people turn out…I just remembered I’ll be at ANTIGONE that nite, but try and have fun without me.

The excellent New Ottawa Repertory Theatre is putting on a show called DIRTY BIRD at the OSSD Nathalie Stern Studio, from the 18th to 27th.  Their last, SINS OF THE MOTHER, was goddamned grand, so check this one out.

Kanata Theatre puts on CASH ON DELIVERY at the Ron Maslin Playhouse the 22nd-26th, and 29th-2nd of April.  righteous Sock’n’Buskin returns with their version of ROMEO AND JULIET the 10th-12th and 17th-19th.  And Algonquin Theatre Arts (sorry, I don’t have a good link for them) is back too, with the Mary Ellis directed ROSENCRANTZ AND GUILDENSTERN ARE DEAD. I will SO be there, because those people ADORE me.  Do YOU?? 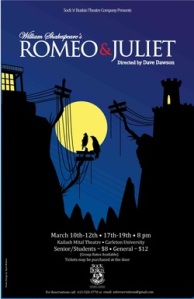 …of course you do, I’m sorry to ask.  Let’s move on, back to Ottawa U where their Drama Guild is mounting THE JEW OF MALTA at Academic Hall from the 8th to the 12th.  And, theoretically, in someplace called the Ottawa U Studio Theatre, someone is putting up a show called THE OPEN COUPLE from the 15th-19th.  I’m a little fuzzy on the details at this time, but I kinda think Ken Godmere is in it..?  Maybe?  Maybe I’ll just ask him on the 7th when he returns to the Elmdale Tavern with CRUSH IMPROV.  It was a packed house last time, so get there early!

*ETA: Ha!   Finally got the info…the show, OPEN RELATIONSHIPS: AN ITALIAN PERSPECTIVE starring Ken Godmere and Madeleine Boyes-Manseau is at Sudio Leonard-Beaulne at Ottawa U from the 16th thru 19th, for…am I reading this right?  No charge?  What are ya waiting for??  Shows start at 8pm.

The Phoenix Players have a new show, WAITING FOR THE PARADE, from the 24th-26th at someplace called ‘The Chamber’ at Ben Franklin place, 101 Centrepointe dr.  Sounds awright to me.

Nearly lastly, the Ottawa Theatre School students team up with Annie Lefebvre and Todd Duckworth to bring you UNDER MILK WOOD at the Shenkman Blackbox Studio space, starting the 24th thru to the 2nd of April.  They rocked in TWELFTH NIGHT, so this should be a gooder.  And I would surely be remiss (or at least get a scolding from Jessica Ruano) if I didn’t mention VERSEFEST, happening fro the 8th to 13th and chock full’a hearty, nourishing poetries!

That’s about it…I could’a sworn I’d heard TotoToo was putting on a show called HAPPY from the 2nd thru 5th this month, but haven’t heard a thing about it, or on their website, as of this writing.  Anyone?

Well, if anyone cares to fill in some of my knowledge gaps, that’d be a fistful of awesome.  If not, I’ll see y’all around at some of this other stuff.  Now I gotta hurry up and post this, because I have much, much more typing to do before I sleep.  Take care, you mob…peace, love and soul,

the Visitor (and Winston)