Wow, it’s been a while since I posted anything..what can I say, that Winnipeg Fringe Festival really wears you out!  But hey, it looks like theatre still happens right here in Ottawa, too. so let’s get listing things!

FIERCE at the Gladstone Theatre, from Black Sheep Theatre..  A new bit of ferocity from George F.Walker for ya!  The 3rd to 13th. 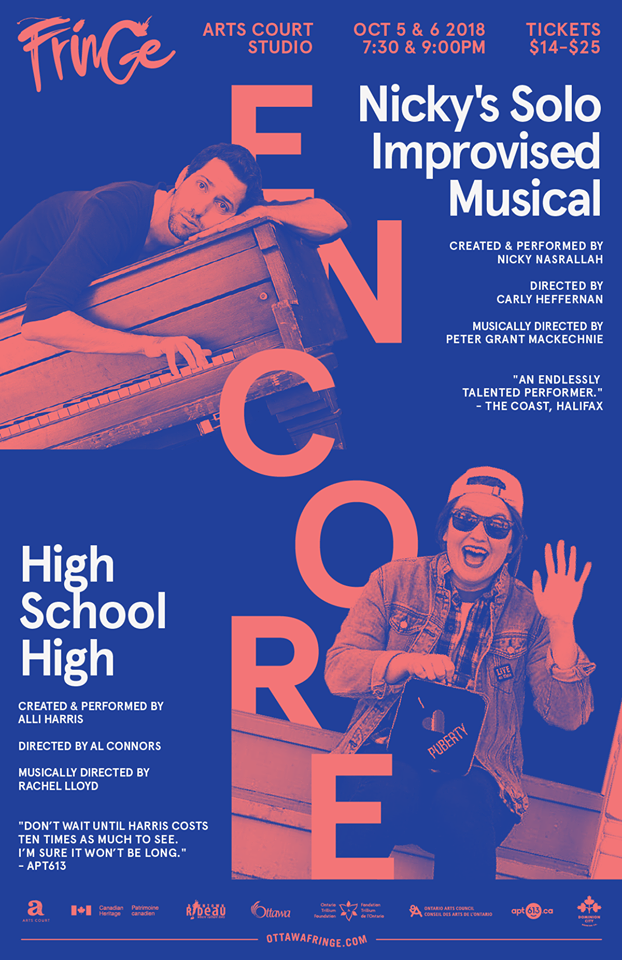 NICKY’S SOLO IMPROVISED MUSICAL and HIGH SCHOOL HIGH at Arts Court Studio, presented by the Ottawa Fringe Encore Series. Okay, so the word ‘encore’ is now being used  rather liberally, but a killer double bill cannot be denied!  The 5th and 6th only.

THE FRESH MEAT FESTIVAL at Arts Court Studio.  The little Festival that could, and did, and is still doing it after 7 years is back! Check out their Website for all the show details and schedules, but just know that this series of 20-minute premiere shows showcasing a wild diversity of artists and ideas is ALWAYS a must-see, and this year ain’t no different.  I mean, Tania Levy’s in it, that’s really all you need to know. The 11th-20th.

THIS FLIGHT TONIGHT: SONGS OF JONI MITCHELL at the Gladstone Theatre, from Bear and Co.  Not exactly theatre, but lots of cool theatre peeps onstage for this evening of awesome songs.  The 17th to 27th.

CLIFFHANGER at the Ottawa Little Theatre. A mystery thriller from the OLT gang, and we promise it’s even better than the Stallone flick.  The 17th to Nov 3rd.

SILENCE at the NAC Theatre.  The romance between Mabel and Alexander Graham Bell, courtesy of former NAC artistic director Peter Hinton!  The 17th to 28th.

THE DROWNING GIRLS at the GCTC.  Three girls in a tub, and it’s October, so of course they’re all dead. The 23rd to Nov 11th.

AN ACT OF GRACE at the Avalon Studio.  A new one-act from John Muggleton, playing twice a night for 2 nights!  The 26th and 27th.

QUILLS at the NAC Theatre.  The Marquis de Sade via Robert LePage.  The 4rd to 6th.