It’s Monday, and my Otter is cracking her writing whip at me, which means it’s Foofarah time! Or dinnertime, maybe. I’m hungry. What’s up first? How do these things work even?

IN THEATRES THIS WEEK! 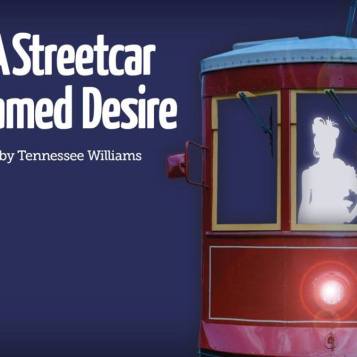 Oh, right, to business! What have we got to catch theatre-wise in Ottawa, even as we kiss March goodbye and hope to Hell April is warmer at last? Well, there’s:

A STREETCAR NAMED DESIRE at Ottawa Little Theatre. I’ve already raved about this one, and could gush on about Laura Hall and the gang, but you should just see it yourself so I can shut up.

STAGE KISS at the Gladstone, from Phoenix Players. Still another week of kissing, which is always good news!

CARRIED AWAY ON THE CREST OF A WAVE at the National Arts Centre Theatre. Hoping to catch this one this week myself, it’s gettin’ all the raves! The wave-raves!

The OTTAWA THEATRE CHALLENGE this Tuesday at Arts Court, hosted by a Company of Fools. I’m back in the audience after two years of participating in the challenge, which means I get to watch my amazing Otter go for the Rubber Chicken Award with the gang at Tuba Czar, but she’ll have some might competition from the likes of Cart Before the Horse, Seven Thirty, Toasted Theatre and many more! Always a fantastic evening.

The YOUTH INFRINGEMENT SCRIPT-TEASE at Live! On Elgin on Wednesday. A sort of meet’n’greet with some of the movers and shakers of this years YI festival…or something like that. I’ll know better once I’ve actually seen it!

Plus AN EVENING WITH GCINA MHLOPHE at Arts Court, hosted by Ottawa Storytellers, as well as some Improv stylings from Grimprov and others!  And the ART TO SUPPORT ART Fringe tour paintnight fundraiser at the Keg on the 28th, set up by the incredible ladies of PrettyUgly production! So many things!

So I got a little bogged down in my head lately with some unpleasant thoughts about unpleasant people. Was actually a little close to mothballing this old blog again, much sooner than planned.  WAAAHHHH, amirite? I’m such a sad little specimen, it makes me sick on your behalf. But THEN, I hugged my Otter, and reminded myself why I write this silly thing in the first place. And it ain’t for unpleasant people, who in the final analysis are worth very little to me…it’s for AWESOME people! People who make Theatre, the bestest people of them all. Who are some of the people I had the crazy privilege of hanging out with recently at…

THE SPA. So a couple weeks ago now the GCTC, in tandem with the feisty folks of TACTICS, hosted the latest in their ongoing series of events/playdates known as the Spa. I had never attended one, and was looking for some theatrical exercizing to do, and this sounded almost too good to be true. A bunch of actors (or would-be actors, in my case) sign up for FREE, hang out for 2 days with a cluster of directors (Mob? Bevy? what’s the proper plural for directors?  I vote for ‘a hustle’) and work in small groups and two hour timeslots on a single play, in this case Lillian Hellman’s classic THE CHILDREN’S HOUR. Every actor gets to work with every director, and of course multiple actor to boot, play different roles, just flat-out indulge yourself in some glorious scenework in a rich, meaty play, before running the whole thing from start to finish on day 2.

Aside from the discovery that Hellman is a Helluva writer, I got to work and play with such bright lights as Bronwyn Steinberg (who co-ordinated the entire event, bless her tireless heart), Rebecca Benson, Mary Ellis, Catherine Ballachey, Gabbie Lazarovitz, Madeleine Hall, Robin Hodge, Megan Carty, Sarah Finn, and a few newer-to-me faces who were a perfect goddamn delight. Vivian, David, Rachel, and whoever I’m forgetting, it was a pleasure! Aside from getting to play 2 different teenage girls…not my usual wheelhouse, it may surprise you to learn…I had the special delight of performing in a rip-snorter of a breakup scene from the final act with my OTS galpal Karina Milech! It was such, SUCH great fun trying on so many different styles and pairings in a no-pressure creative environment, and reaffirmed my love for the stage and acting that, I’ll confess, had taken a hit after some recent events. I hope the Spa returns and quick, and I look forward to jumping back in the next chance I get! Thanks again to Bronwyn, Eric Coates, TACTICS and the GCTC for the amazing opportunity, and for giving me the shot in the arm I done needed.

I had a few more things to pad his Foof out with, but like I said, I was hungry, so me and the Otter ordered pizza and watched some Crazy Ex-Girlfriend and now it’s really kinda late and I’m running out of steam.  My plan was to go all investigative and in-depth on the newly announced GCTC 2018-19 season, with a smoking hot roster of shows like The Virgin Trial, the Drowning Girls, Bed & Breakfast, Mountaintop, Behaviour and Lo (or Dear Mr.Wells), but I’m all full and tired now..!  Let’s just assume they’ll all be amazing and cool, because that’s what Theatre IS you guys, c’mon.  It certainly seems like a pretty hard-hitting bunch Coates and company have programmed for us, and I look forward to getting hit hard by the lot of them.  Not sure which one I’m most looking forward to…I wanna say Drowning Girls, but that may just e because the last play I saw involving girls and a bathtub was MOUTHPIECE and that was freaking phenomenal. Also, on the GCTC subject, don’t forget their newly announced addition to THIS season, the youth show STILL/FALLING, coming next month..!  Swell surprises like that I can use plenty more of at the Irving Greenberg, and no fooling.  Oh, and they have a squinky new website to boot.  So much new to love!!

Following this and the recent NAC season announcement, we’re really just waiting now on the Gladstone and their initial season launch (I say initial because you KNOW they’re gonna add about 15 or 16 shows to whatever they first announce as time goes by, which is absolutely perfectly fantastic).  As soon as they come clean, ya know I’ll be here with what will doubtless be a similarly half-assed, late-night roundup of their shows to boot, with little advance preparation or insight to accompany it.  No need to thank me, folks, saving the day like that is just what I do.  But I better get outta here while it’s still Monday or I’ll have to rename this post, and that level of technical expertise is beyond me at this late hour.  Peace, love and soul,