Still trucking along at the Ottawa Fringe Festival, and managing to keep up. I’m somewhere in the 20’s as far as show viewings go, which is respectable I feel. But there’s always room for one more, and having just come from a pretty dark drama, it was time to lighten things up with some laffs. And I had a pretty good idea where the best place was to go an find me some of those.

Off to Academic Hall, then, for Punchbag Playhouse’s WUNDERJAMMER, a brand new sketch comedy show written by Richard Hemphill, who also penned last years ultra-mega-boffo hit DIE ZOMBIE DIE. Dragging that show’s director Stewart Matthews kicking and screaming along, they’ve assembled the ace comedy squad of Richard Gelinas, Victoria Luloff, Jordan Hancey and Allison Harris to knock about the stage as 60 characters in 20 odd back-to-back sketches. Featuring bits ranging from the very silly (ask Mr.Science!) to the very, very silly (Flatulent Cat Farm!), this is clearly a show with something for everyone. Well, everyone who thinks farting cats are funny. That’s everyone, right? 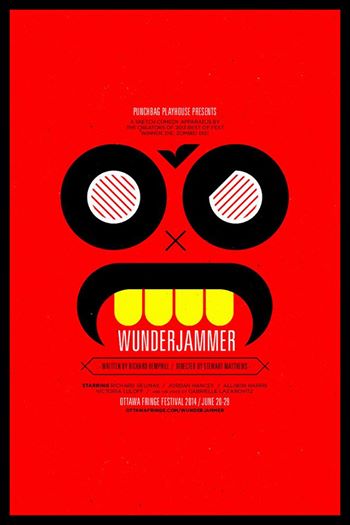 Matthews eye for physical theatre is put to excellent effect here, and this whole wacky show runs like a well-lubed machine, from the imaginative opening glow-in-the-dark sequence through every goofy moment to follow. The cast is brilliant, and have multiple standout moments. From Jordan Hancey’s first skit as an increasingly flustered shopkeep, he gets effortless laughs with just some perfectly timed glares. Richard Gelinas as a grumpy flower pretty much made my year. Alli Harris is a clowning comic goldmine, delightfully hamming it up as a dubious scientist, oddball duchess, and once operating in seamless tandem with Victoria Luloff as little girls unwisely interrupting a Monster at work. Luloff scores huge as a brilliantly dim supermodel (of the world!), working to eradicate children’s literability, in a sketch that highlights Hemphill’s clever comedic wordsmithery, something at work throughout. This is smartly silly and very hilarious show, and I was grinning like a little kid on his first trip to Bunny Town the whole time. See it and make with the laughing, already. Peace, love and soul,