With my comical limp only getting funnier, my dash between Petit Campus and Mission Santa Cruz must have been some pretty good street theatre to anyone watching. But let it not be said I don’t rise to meet the challenges of distance and timing the Montreal Fringe hurls my way, and I made it with moments to spare at the penultimate show of my visit. This one is from Saskatoon’s Theatre Howl, a group familiar to me from their awesome show MATCHSTICK that I saw at last year’s Ottawa Fringe. I was excited to see what they came up with this time.

The new show is AIDEN FLYNN LOST HIS BROTHER SO HE MAKES ANOTHER . Created by Morgan Murray and Nathan Howe and directed by Howe, the show is a silent adventure, excepting a pretty freaking cool soundtrack throughout. On a quaintly and intentionally naive set filled with bike wheels, cloth backdrops and back-projected sets of light, we meet young Aiden Flynn (Morgan Murray) in the process of trying to build himself a new brother to replace the child his Mother lost. His first attempt, using his wagon and mason jar organs as raw materials, doesn’t quite fly. But when he gets a little more ambitious, letting rip with full-on Frankensteinian bursts of electricity into a more humanlike creation, his new baby Brother (Danielle Spilchen) wobbles and spurts to newfound life. What follows that is something every bit as magical and incredible as the impossible act of creation that I just described. 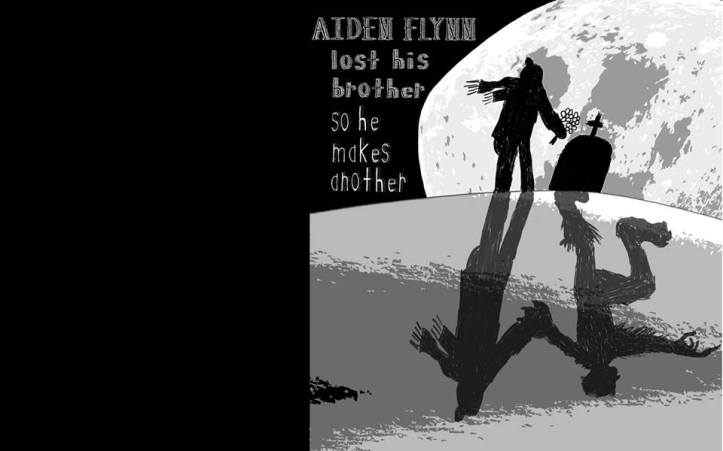 It’s very, very rarely that a show completely and wholly draws me into its self-created reality, but within minutes of the start of AIDEN FLYNN I could barely even remember the world outside. Morgan and Flynn are so utterly enchanting as the brash Flynn and his innocent creation that I didn’t even want to hang around after the show to congratulate them, because it might break the beautiful spell I was under. Watching Aiden teach his oddball little brother to crawl, walk and dance are some of the most unforgettable moments I expect to ever see in a theatre. So simple, so real, and so powerful…this is a show that will touch your heart. Pardon if I’m gushing, but shows like this are kind of why I love theatre, you guys. The magic you always hope for. There ARE a sightline issue or two arising from the venue itself, but don’t worry…this is a story worth craning your neck for. Peace, love and soul,