RUMORS at the Ottawa Little Theatre.  One last day to catch some Simon-tastic fun at the OLT.  Ends the 1st.

POP FICTION at Arts Court Studio, from Groupe des Deux.  Also ending on the 1st. Run!  There are aliens!!

KIM’S CONVENIENCE at the NAC Theatre, from Soulpepper Theatre.  Smash hit, great fun, good times.  Go while you can!  Until the 8th.

SUBWAY STATIONS OF THE CROSS by Ins Choi, at St.Alban’s Church (454 King Edward). If you liked Kim’s Convenience (and you did), catch star and writer Choi in his one-man spoken word show, one night only on Sunday the 2nd!

THIS IS WAR at the Irving Greenberg Theatre (GCTC).  Hannah Moscovitch’s war drama hits the capitol, and it’s gonna be a gooder. Directed by GCTC AD Eric Coates!  From the 4th to 23rd.

PERFECT WEDDING at the Ron Maslin Playhouse, from Kanata Theatre. From the 4th to 15th. 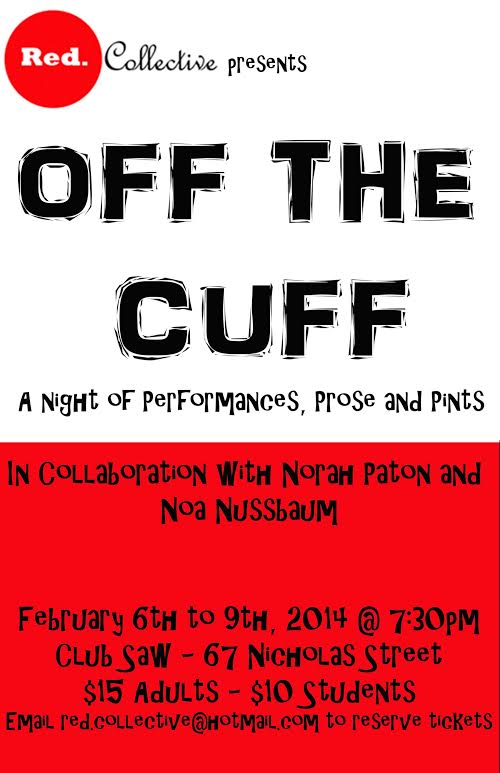 OFF THE CUFF at Club SAW, from Red.Collective.  The 6th to 9th.  Evenings of drink, variety and merriment courtesy of the Reddies!  Every evening features a full lineup of performers, including Jonah Allingham, Tony Adams, Brefney Caribou, Chany Singh, and a new production of Kara Crabb’s ‘The Stillbirth’ starring Noa Nussbaum and Mike Showler, directed by Norah Paton!

LES MISERABLES at Code’s Mill on the Park (Perth), from Orion Theatre Company.  6th to 16th.  Admit it, you KNOW you want to go to Perth to see a musical.  Now’s your chance!

EMPIRE OF DIRT at the Avalon Studio, from New Ottawa Repertory Theatre (NORT). Cool sounding drama about family and addiction, just the thing to chase away those winter blahs. The 7th to 16th.

AGE OF AROUSAL at the Gladstone Theatre, from Bear and Company.  Some steamy goodness from the Gladstone gang.  From the 7th to 22nd.
SEVEN STORIES at Algonquin College.  The Gonq’s kick off their 2014 season with this awesome bit of Panych.  Can’t wait!  From the 12th to 16th.

THE IRISH CURSE at Arts Court Theatre, from TotoToo Theatre.  Irish shenanigans abound at Arts Court! From the 12th to 15th.

THE FLYING CANOE at Shenkman Arts Centre, from Rag and Bone.  Puppet goodness for the kids, and you too. The 16th and 17th.

DIB AND DOB AND THE JOURNEY HOME at the NAC Fourth Stage, from Roseneath Theatre.  Twins try and find their way home in this celebrated piece of children’s theatre.  The 17th and 22nd only.

ENRON at the NAC Studio.  A theatrical expose of everyone’s favourite corporate bad guys. From the 17th to March 1st.

UNDERBELLY at the Gladstone, from Black Sheep Theatre and Stars and Hearts. Jayson McDonald!  All you need to know, now go see it!!  okay, it’s a one-man head-spinner about William Burroughs and the beats, and it’s AWESOME.  The 26th to March 8th.

TROIS (three) at Arts Court Studio.  This is the big one!  An event so huge it took three companies and two languages to properly express itself!  Running from the 27th to March 1st, TROIS features not only affordable drinks, but WHAT ABOUT HORSES? a brand new piece from Cory and Tony at May Can Theatre, as well as the strapping Grimprov lads in START START ENERGY OFFICERS!  And Dead Unicorn Ink team up with some of the survivors of the Ottawa Theatre School (myself included, not to mention the legend herself, Bobby Roberts) for ACCEPTABLE APPEARANCE THEORY from Victoria Luloff and Patrice Forbes.  It’s gonna be a swell time out, folks, and I’ll be bugging you about this one a bit more in the days to come. 🙂

OCCUPY ME at Rama Lotus, from Counterpoint Players.  Sarah Lotus blossom returns for one night only, the 28th!

Yes, it’s time for the fourth installment of the lil festival that makes February worthwhile!  Come get in on the fun from the 11th through 23rd!  Featuring… 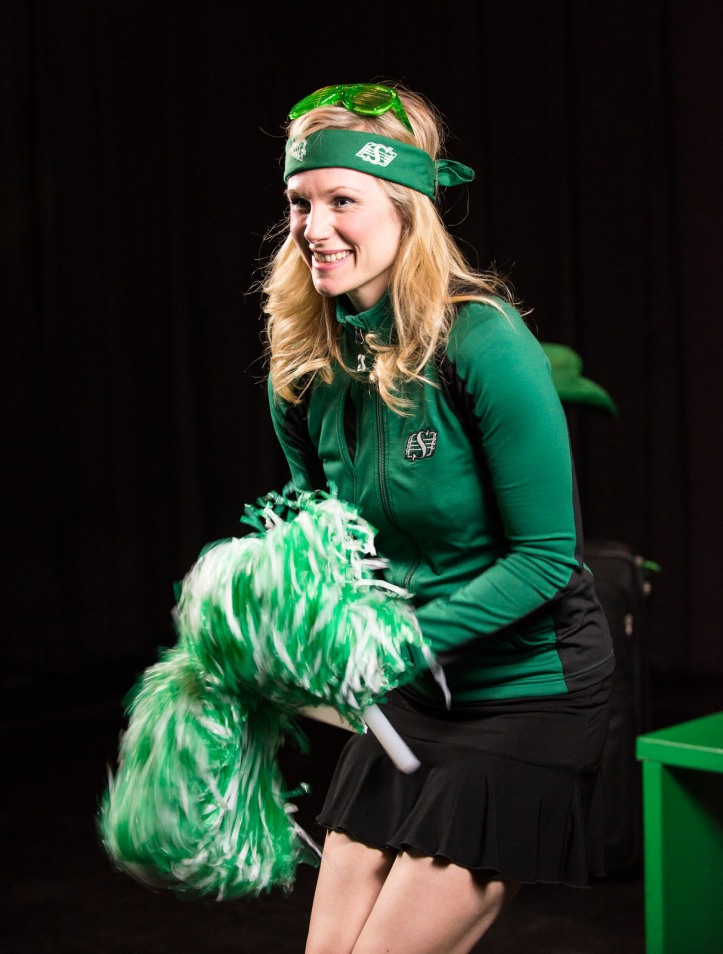 RIDERGIRL, starring Colleen Sutton as the ultimate CFL underdog heroine.  See the show that won the Grey Cup (pretty much…)! 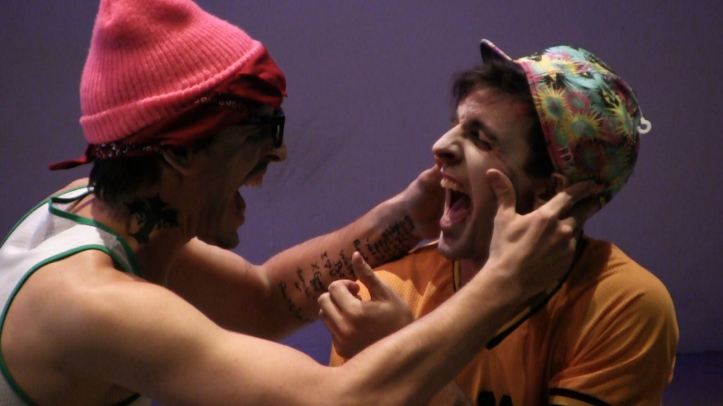 A QUIET SIP OF COFFEE (or This is not the Play we’ve Written), a true-life tale of fundamentalism gone wrong from Animal Parts.

MORRO AND JASP DO PUBERTY, which has Morro and Jasp in it so you’re seeing it and that’s that.

CAN WE TALK? From the STO union and a telephone in the lobby.  Keep yer eyes peeled.

All this plus a cool PITCH PARTY hosted by a company of Fools on the 19th for new ideas to find interested ears, a rocking opening week party on the first Saturday after the final show lets out, and REVISED FROM THE BELLY OF A WHALE, a live reunion and concert on the 21st looking back on the show that nearly got the better of Emily Pearlman and Nick DiGaetano!

PROJET PUPITRE at the NAC Studio.  Cool theatre for young folks, the 1st and 2nd only.

CARTE BLANCHE at Espace Rene-Prevost.  Another cool mixed bag of art and theatre, from the 6th to 8th.

FILLE D’ARGILE at l’Ecole de la Salle, from Theatre la Catapulte.  One showing only (ater a school series) on the 22nd.

Crush Improv hosts BOUT TIME at the Heart and Crown in the market(Mother McGunitey stage) on Monday the 3rd; following the show of Age of Arousal on the 14th, the gang will perform their VALENTINE’S CRUSH, an improvised recreation of the play.  AL Connors will be leading an improv workshop in the Centrepointe studio on the 13th, and on the 22nd Crush will host it’s regular SPOTLIGHT ON… show, also at Centrepointe, this time featuring city councillor Katherine Hobbs!

GRIMprov first and last Wednesday of every month at the Cock and Lion!  And don’t miss them in TROIS (THREE) at Arts Court the 27th to March 1st!

Crystal Basement at the Atomic Rooster on the last Tuesday of every month!

All this plus CRACKING UP THE CAPITOL, WINTERLUDE, the FACE 2 FACE dance series…the universe is giving us plenty of good reasons to weather the cold, kids.  Oh, and if you’re in PEI for some reason (they have a bridge now, I hear), you could always check out my mate Benton and his comedy pals making with the Valentine’s merry!

Yes, he’s good old OTS alumni with me (and we’re all over this month, as always…TROIS, IRISH CURSE, RIDERGIRL, THIS IS WAR, POP FICTION, there’s no stopping us!  So no excuses now, everyone get your snow boots on and head on out for at LEAST a dozen pieces of theatre this month.  I double dog dare ya.  Peace, love and soul,