Mon Dieu, but it’s been too long since I caught me some French Theatre.  How long HAS it been?  I can hardly recall…it’s like I got busy with something the last three months or so.  It’s all a blur, I tell you!  But even though I’m still an Anglo, and my French remains passable at best, I still adore seeing la theatre Francais, and I still maintain that any fellow Franco-deficient theatre fans out there should get themselves out to the odd production themselves.  Why?  Because the French just attack theatre differently, is all…there’s this crazy sensibility that seems to come with the territory that makes the shows great to watch, even IF you don’t really know what the Hell is going on (I know that’s a generalization, but I’m hoping the fact that it’s a favourable generalization will earn me a pass here).

All of which is a long-winded way of saying I was at Arts Court this past evening to catch the new spectacle from Groupe des Deux, Richard Leger’s POP FICTION.  Co-Directed by Benjamin Gaillard and Natalie Joy Quesnel, I’d heard some enticing and amazing things about this production, especially from the design side of things, and was stoked indeed to check it out.  Arts Court studio was laid out in a merrily new way for the show, not unexpected, and every chair was outfitted with a pair of headphones.  Sort of unexpected.  Enter Benjamin Gaillard, seemingly here to act as spokesperson for some sort of business conference, but something seems to be troubling him.  Even with my poor French, I could tell he was stressed about…

…and what it was, I just really don’t want to tell you, but believe me, you want to find out for yourself.  Aided by a trio of backstage translators (Chancard Lemvo, Julie Lotrice Grethen and Sebastien Lajoie), Gaillard is joined onstage by three, um, guests, played by Nancy Kenny, Michelle Leblanc and Chantal Tokarky.  He attempts to greet them politely which only half works, and things rapidly start going from bad to worse.  Apologies for being vague here, but the surprise WILL be worth it.  And there’s also a good helping of English throughout the production, if some of my fellow Anglos are trembling with fear at the thought of the language barrier. 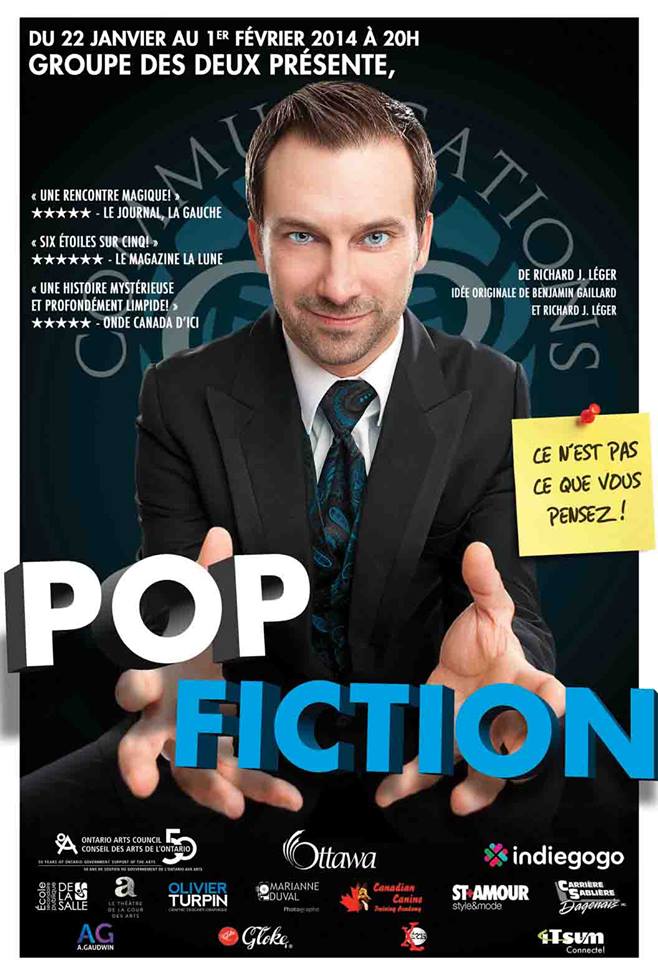 This is one of the coolest looking live shows I have ever done seen, and the G2 gang have really outdone themselves on the design front.  From makeup, costumes and props to several slick satirical videos (and even one Skype call), there are incredible things going on visually in POP FICTION…it’s a hell of a sight to see.  Shoutouts to the design team of Isabelle Belisle, Julien Lelievre, Francois Oliva, Benoit Thibodeau and Jacynthe Tremblay, as well as anyone I might have missed (I forgot to grab a program the night I was there, horrors!).  Ben Gaillard makes a very engaging lead, struggling to maintain his tenuous hold of the situation as things spiral out of his nervous clutches.  Nancy, Michelle and Chantal are awesome as the eclectic trio, doing great work under trying conditions (just GO SEE IT, you’ll see what I mean!) and creating what will be some of the most memorable onstage personas of 2014.

I of course only half-followed all the specifics of the story, my lapses in French and some Arts Court echoes causing some interference in my head, but this was just a killer fun time no matter how many words I missed.  This is a production of rare ambition, and one that deserves to be admired by a nice, wide audience.  Get your butts to Arts Court, because it’s playing in the studio until February 1st and you really want to check out this cool, poppy production while you can.  Peace, love and soul,