For the Bible Tells me so

Thunderation!  So much new stuff to partake this week, it’s almost more than a theatre nerd could hope for!  And the pickings are good, folks, so don’t let me hear you whining about staying inside because it’s all cold out and other such nonsense.  What’ll be cold is your sad, lonely soul if you miss all this sweet, sweet theatre!  Besides, do you wanna live forever?  It’s only 36 below zero.

Speaking of eternal life, my first show up this week was the latest from 9th Hour Theatre, GRAIN OF SALT.  An original world premiere (how I dig the sound of those words) created by and co-starring Megan Piercey Monafu, GRAIN is a verbatim piece (ie: all the text comes from actual interviews from actual human people) inspired by the ‘we’re sorry’ project, an undertaking seeking to ask a multitude of Canadians, both in the church and not, whether the Catholic church should apologize for any transgressions over the years…or if it even had anything to apologize FOR.  Many answers were forthcoming, from ironclad certitude on both sides of the equation to honest bafflement in the mushy center.  Some of the responses were insightful, some funny, a few heartbreaking, and on or two downright maddening.

9th Hour made the smart move of bringing Kelly Rigole (herself a creator and performer in the Fringe/Undercurrents verbatim hit THIS IS A RECORDING) on board as director, and with her at the helm this piece really takes off.  It doesn’t hurt that they have a very solid onstage cast as well…Monafu herself, along with Lori Jean Hodge, Robin Hodge, Jeff Lefebvre and Mitchel Rose (OTS shoutout!).  Using a variety of simple props and costumes along with some beautifully choreographed physicality, the gang makes the most out of the potent material that has been assembled into the story.  What could have been portrayed as a simple ‘talking head’ style of theatre turns into something really memorable.  An extended moment on a Montreal subway train is magical, as well as Lefebvre talking to Monafu in a busy café, telling a story about being relieved of his duties due to struggles with his sexuality amidst the hustle and bustle without.  Rigole isn’t afraid of ambient sound, or long awkward pauses (there’s a gorgeous moment late in the show where everyone grumpily sits down to break bread with one another, I loved it to pieces). 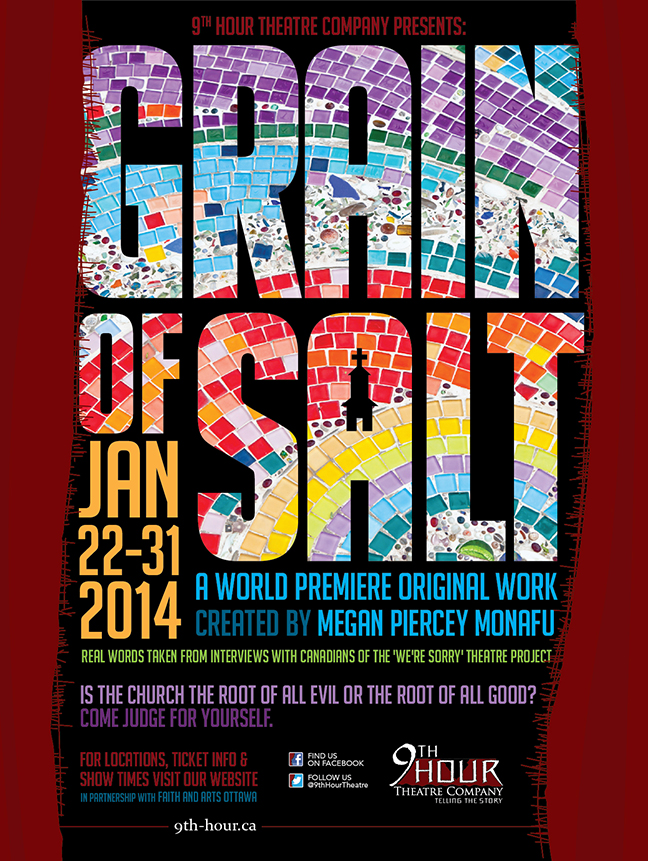 There’s a lot in the text about the church’s relationship with homosexuality, so much that it has no choice but to become one of the central points of the show.  It’s handled well, with interesting points coming from all sides (you’ll agree with what you agree with, but I still enjoyed hearing every word).  And there’s plenty more to dig into as well…intellectual arguments against the bible clash with the genuine love the church fills so many people’s lives with, to the point where the show almost can’t help but make you question whatever ideas you came in with.  Which is kind of the point, I suppose.  And this may be my Ottawa Theatre School loyalty shining through, but props to Mitchel Rose for a wonderful moment as an older devotee describing a pilgrimage he partook…it was my one true misty-eyed moment in the show, and it made me feel all warm and fuzzy.

The premiere last night was at the Mercury Lounge in the market, but the show will be travelling to multiple venues in its run.  Here’s the full rundown so ya don’t get lost (because you really should be heading out to see it):

So there…brave the cold, head on out and check out some original, eye-opening theatre in the middle of January.  It’ll do ya good!  Peace, love and soul,