Missed a day of posting there (actually a few days, but who’s paying attention?) So I have to hurry and get this one up before I get too far behind.  And I definitely wanted to get something written about what I think is the last show of the season from Ottawa U’s Theatre de la Licorne.  This latest offering is Botho Strauss’ LE TEMPS ET LA CHAMBRE, in a translation by Michel Vinaver, and directed by the increasingly impressive Eric Perron.

Now, be it a combination of my still-poor French skills, and the fact that Botho’s play is on e heck of a mindbender in and of itself, I can’t comment TOO closely on the plot…I THINK I got it, but just in case I’m completely off-base, I’ll stick to the basics.  The play is comprised of two acts, radically different and yet strangely connected.  The first, more surreal act (and hence my fav’rit) starts out with two men (Patrick Potvin and Guillaume Saindon) in a room…one constantly watches the room itself, while the other always looks out one of the huge windows.    As they watch, the front door keep son buzzing, and more and more oddball characters start filing in.  Marie (Chloe Tremblay), who seems to have some connection to the place, and soon becomes central to most of the action.  Plus there’s a couple of strangely menacing, yet childlike figures in trenchcoats (Chancard Lemvo and Alexandre Bazinet), a fellow who’s misplaced his watch (Nocolas Tremblay-Foisy) and the hyper, flirtatious mystery woman following him about (Virginie Houet).  All this plus a brief visit from a sleeping girl (Alex Beraldin…at least, I think that was her) and the heavy-coated fellow carrying her (Alexandre-David Gagnon). 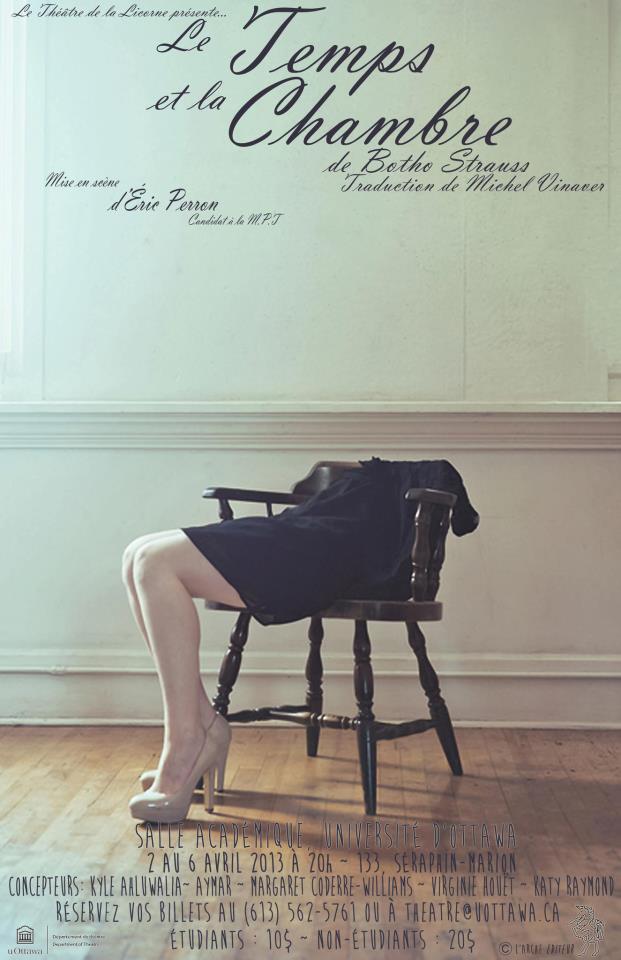 I missed some (a lot) of the dialogue in this act, but was enjoying the ambience far too much to care.  The beautiful set, lights and sounds all coalesced with a stage full of strong performances to create a first act that was truly something special to witness.  Moody, funny, harrowing, often all at once, and featuring a wonderful final moment.  Act Two turned everything on its head, and I don’t want to give any more information than that to A) avoid spoiling the fun, and B), again protecting myself in case I got everything completely wrong.  Probably.

Perron puts together a very intriguing show, and hats off to the wunnerful Chloe Tremblay, who always seems to be on stage when I see great French theatre at Ottawa U.  And Virginie Houet has some great comic moments in act one, as does Patrick Potvin.  Very good stuff, and I’d love to hear from any actual French-fluent fans as to what THEY thought of it.  The rest of you, you still have until the 6th to catch this one over at Acadmic Hall.  And if you needed even more incentive…they have ice cream. Peace, love and soul,