Whee, another Theatre month begins in O-Town, and the skies have sent a fluffy blanket of snow to celebrate! Lots to look forward to, so let’s start looking!

PRIDE AND PREJUDICE at the Ottawa Little Theatre.   Ending on the 2nd, a jolly fun rendition of Austen’s hit.

GOD OF CARNAGE at the Irving Greenberg Theatre (GCTC), from Third Wall Theatre. Until the 3rd, Third Wall’s return to the big time with a vicious and inspiring Ontario premiere of Yasmina Reza’s biting look at the civilized world.

INNOCENCE LOST at the NAC Theatre.  Based on a true story, so probably both amazing and depressing at the same time.  Until the 16th. 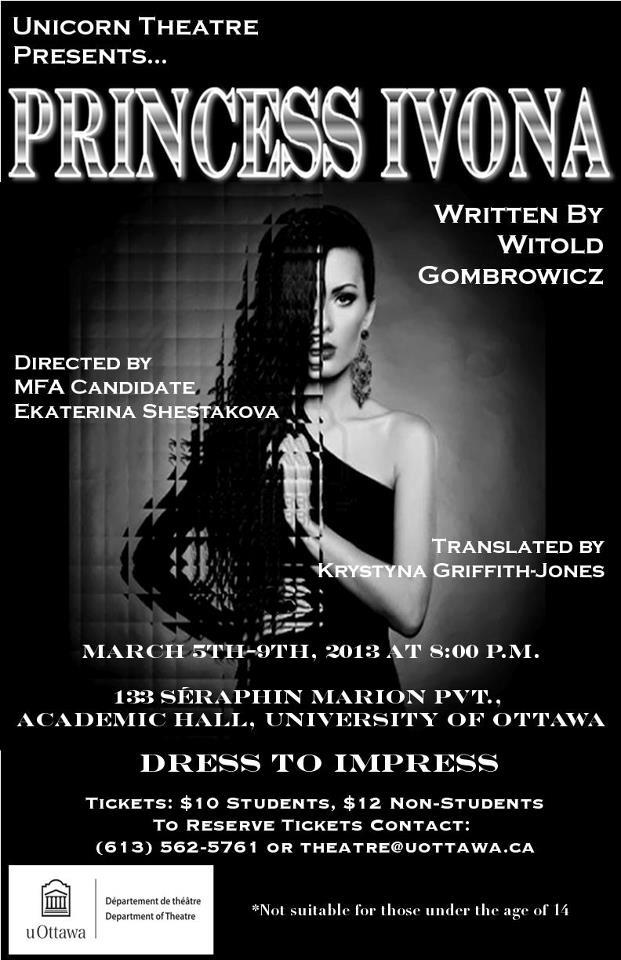 PRINCESS IVONA at Academic Hall. Directed by MFA candidate Ekaterina Shestakova, a dress-to-impress extravaganza from the 5th to the 9th

ROCK OF AGES at NAC Southam Hall.  Some Broadway style hair metal,  all big and loud and stuff!  From the 5th to 10th.

HROSES: AN AFFRONT TO REASON at the Ottawa Dance Directive Studio (Arts Court), from Evolution Theatre and Mi Casa. My own personal pick for show NOT to miss this month, two of my fav’rit companies team up to bring what is sure to be an amazing show.  From the 7th to 16th.  And don’t worry, it’s fine to just pronounce it ‘Horses’.

THE VAGINA MONOLOGUES at Bronson Centre, from VDay Ottawa. A kickin’ annual tradition to celebrate Women and their awesomeness, this time on the 8th and 9th.

THE DROWSY CHAPERONE at Centrepointe Theatre, from Orpheus Musical Society.  Big time musical theatre from the people who know how it’s done, from the 8th to 17th. 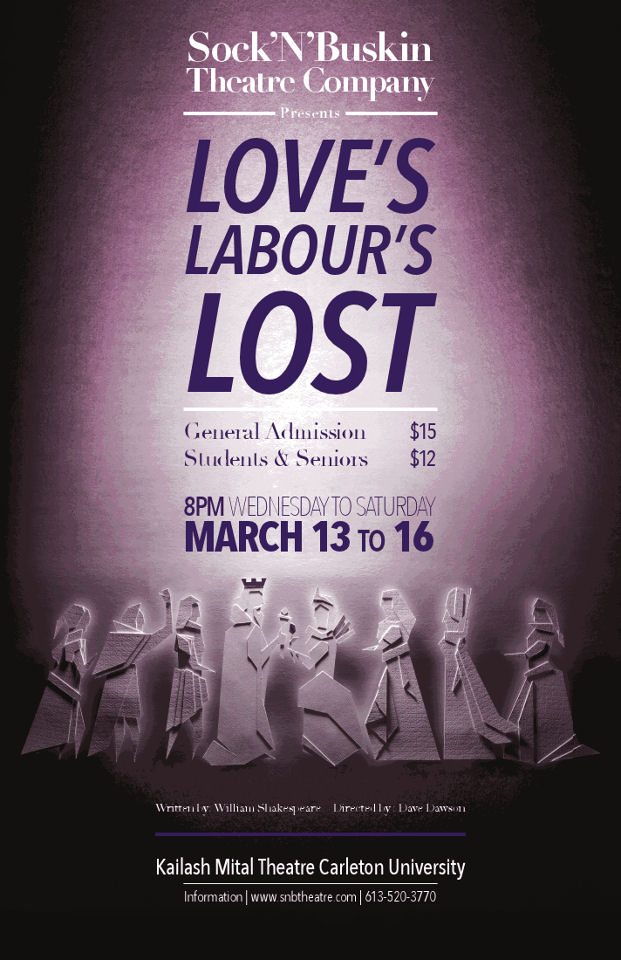 LOVE’S LABOURS LOST at the Kailash Mital Theatre (Carleton University Campus), from Sock’n’Buskin.  Following their ROCKY HORROR success with some Billy Shakes, and I’m pretty stoked.  From the 13th to 16th only!

MFA 4th YEAR DIRECTORS SERIES at Studio Leonard-Beaulne, Ottawa U campus.  A regular occurrence, and one of Ottawa’s best-kept secrets..free shows put on by the best of the best of Ottawa U’s directorial crop, this time featuring Team Visitorium superstar Danielle Savoie, plus a French show from director Alex Beraldin!  Open dress on the 14th, proper shows on the 15th and 16th, starting at 8 pm.

DEATHTRAP at the Ottawa Little Theatre.  I remember seeing this movie as a wee little thing, and it spooked the crap out of me…kinda excited for a rematch!  From the 19th through April 6th.

33 SWOONS at Algonquin College.  A trio of short plays by Anton Chekhov and director Mary Ellis, with a perhaps inordinate amount of swooning.  You be the judge.  From the 20th to 24th.

THE WIZARD OF OZ at the Greely Community Center, from the Greely Players.  Put some Baum in your theatre month with this fun-sounding show in ye olde Ottawa Valley.  From the 20th to 24th!

HARVEY at the Ron Maslin Playhouse, from Kanata Theatre.  The classic tale of man’s best friend, a giant imaginary rabbit.  From the 26th through April 6th.

FALSE ASSUMPTIONS at the Gladstone Theatre, from Ottawa Theatre School and Plosive Productions.  The latest From Lawrence Aronovitch, and starring the current crop of 3rd year OTS gangsters, this world premiere about Marie Curie runs from the 26th to the 30th only, so don’t miss out!

THE OTTAWA THEATRE CHALLENGE at the NAC 4th Stage. A multi-theatre company event/battle in celebration of World Theatre Day!  Details to come I hope!  On the 27th.

BECKETT’S BRIEFS at the Glebe St.James United Church.  Also on the 27th, the latest in the Third Wall Empty Space reading series, this time with some of Sam Beckett’s dandies.  Featuring Todd Duckworth, James Richardson and Kristina Watt!

OULIPO SHOW at the NAC Studio.  Ends on the 2nd!

L’AMOUR EST AVEUGLE at Theatre de L’Ile.   Starting on the 6th and playing through til April 6th, another gooder from Theatre de L’Ile, just nominated for best French Production BOEING BOEING in the Prix Rideau Awards!

LA VOIX HUMAINE at Studio Leonard-Beaulne.  From the 7th to 9th (6 pm start time), and I don’t really have much more information than that!  Except it’s a Jean Cocteau bit, and he seemed to have some talent to spare, so there’s that.

APPELS ENTRANTS ILLIMITÉS at the NAC Studio. Formerly known as PORTES.  From the 20th to 23rd.

CRUSH IMPROV – The classic three on three ‘BOUT TIME show returns on Monday the 4th at Westboro Masonic Hall, a new venue for the gang and yes, the bar will be open (still trying to find out if we can bring Hintonburger).  Plus the Crush gang will be performing their latest SPOTLIGHT ON… show at the Gladstone on the 11th, with special guest John P.Kelly (and there’s a cat you just KNOW has some good stories to tell…).

GRIMPROV – JCPI: Jesus Christ Private Investigator on Wednesday the 6th at the Cock’n’Lion.  If that doesn’t intrigue you, nothing will.

CROSS-CANADA SHOWCASE at Studio Leonard-Beaulne.  Hosted by Crush Improv and featuring guest stars from coast to coast, I’ll update with names and details as they come in!  Sounds like a pretty goddam good way to spend a Monday, tho.

CRYSTAL BASEMENT…let me know when your next shows are, and I’ll put them here, deal?  Deal.  That goes for any other of you little Improv Bastards who pop up.  WHO’S ONLINE ANYWAY, I’m looking at you…

OUTSKIRTS OF TOWN from Ottawa Dance Directive, at their studio (Arts Court).  Until the 2nd…dance show!

LA TRAVIATTA at Southam Hall (NAC), from Opera Lyra.  An ‘in concert’ opera, so the whole gang…cast, orchestra, thee works…are all up on stage together.  Should be a musical night to remember, gang.  The 21st and 23rd only!

MARX BROTHERS and RAY HARRYHAUSEN FILM FESTIVALS at the Mayfair Theatre.  Too cool not to mention, check the main Mayfair website for showtimes and details!

NAC DANCE has some good stuff coming too (including the ballet of SLEEPING BEAUTY from the Royal Winnipeg), so check out the link for all the details!

Did I miss anything?  Of COURSE I did!  Let me know what it is!!  I WANT TO KNOW!!!  Right, I’m off, gotta eat, gotta see a show, gotta write about the show, gotta sleep, gotta go to work…you know the drill.  Peace, love and soul,