Holy Hell, how long has it been since I posted a god-damned review on this here review blog?  Sheesh.  Sorry, everyone who thought I was passed out or dead somewhere…I think the post-Fringe ennui was getting to me for a bit there.  Why I’ve even SEEN a few shows that I haven’t even written about…shame.  Shame I say!  And I’m terribly behind on seeing some of the new shows to grace our town, and I apologize for all of that.  I just really needed something to snap me out of this funk.

This funk-snapper came in the form of Al from Bloody Underrated over Montreal way, who hepped me to a touring show that was about to grace our city for one-night only.  A former Fringe show (like the last three shows I done seen and haven’t written about…I know, SHAME!  I feel it, I swear), this one a top pick of the 2011 Atlantic Fringe, SHORT SKIRT BUTCH from Halifax writer Lee Anne Poole.  A one-woman show is always my cuppa tea, and a one-woman show taking place in our very own sex-shop extraordinaire Venus Envy..?  Sold. 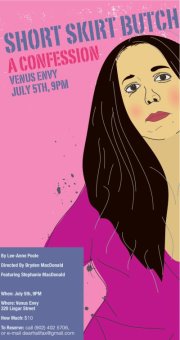 SSB tells the story of Jean (or rather, Jean tells US her story), a self-professed pervert played by Stephanie MacDonald, who recently impressed the Hell out of NAC audiences in Danny MacIvor’s COMMUNION. Jean, an instantly engaging narrator, is both forthright and awkward, adopting labels as quickly as she discards them, sharing everything and apologizing for (almost) nothing.  She’s there to set things right, she tells us, and clear the air about a particularly bad breakup she recently had, with not one but two women, at the same time.  From her early sexual experiences (including a memorable anecdote involving a teddy bear) to her eventual meeting with a gorgeous lesbian power couple that would lead to romance, heartbreak and the most hilariously lewd bit of larceny I’ve heard of in a good long while, SSB manages an impressive mix of genuine emotion and brutal honesty with one of the funniest fucking scripts I’ve ever heard. Poole’s dialogue is natural and insightful, and MacDonald is more than capable of turning it into a wonderful and memorable event.  The show is fearlessly frank about sexuality of all stripes, and we could use plenty more of that.

Being a straight dude, I’m aware that some of the finer jabs at queer culture and roles might have passed me by, but I wouldn’t call this show exclusive by any means.  If you have a heart and a sense of humour, this one’s for you.  Though you’ve missed it in Ottawa if you weren’t in the audience tonight (Here’s hoping they bring it to Fringe in the future…it would be VERY welcome), but their tour continues in Sudbury on the 7th, Toronto on the 8th, and then Halifax for the Queer Acts Theatre Festival.  Deets on their Facebook Event Page…if they’re in your neck of the woods, do yourself a favour and check this show out.  You’ll laugh, you may cry, and you’ll almost certainly learn a thing or two.  Peace, love and soul,