Zooming right along to my third show of Ottawa Fringe 2018, and my last show review of opening night. Got two written up last night, now we’re up early inhaling a gorgeous gallon of dark roast to finish the days work, before heading off to work. Getting a little worried already about my endurance for the whole festival, I’ll be honest, but I know some tricks…we’ll make it. Now, if you’re still reading, let’s talk Fringe!

Still finishing up a multi-show stay at la Nouvelle Scene last night, my final performance came in the mighty Studio A, a whopper of a space to rival Academic Hall for seats. Honestly didn’t know it was a venue this year, but it’s fantastic, so hooray! And hooray too for the show I was seeing, Pulsive Party’s LIP SERVICE. Featuring the inhumanly wiry and energetic Ashley Whitehead and Natalie Tin Yin Gan as a pair of giant talking, singing and dancing vulvas, and I could probably just stop writing right there, couldn’t I? I mean, what else am I going to say next to follow that up? But the show must go on, and the review must be padded, so here we go! 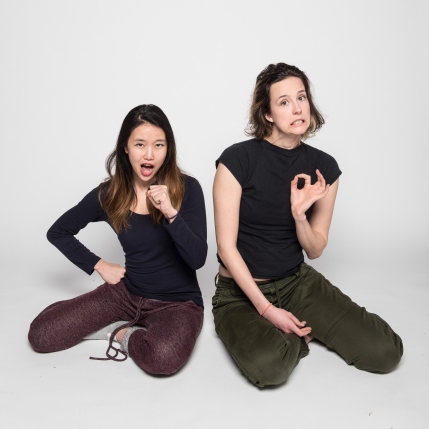 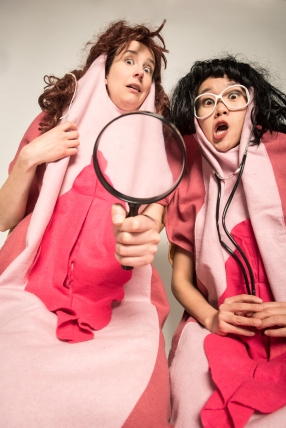 (photo credit for the above before and after pix – Wendy D Photography!)

Pulsive Party, a troupe from out west, have put together maybe the most perfectly on the nose (well, not the NOSE…) feminist Fringe piece you could even imagine. More sketch/variety show than play, the show makes full effect out of the most fabulous costumes around, not to mention the top-notch comic skills of the ladies wearing them. Every naughty bit joke or pun you will ever need finds a home here, as well as THE best Freefalling cover you are ever going to hear, ukelele and all. One bit had the gals exerting themselves so intensely I became mildly concerned for their well-being in those outfits (do….do those things breathe..?), but this troupe are troopers. Their comedy dance routines are the absolute bomb, their gags range from tee-hee to laugh out loud funny, and I may have been missing a punchline or two. Let’s face it, I’m missing some crucial in-joke-decoding equipment for this show, but I still had a great time.

LIP SERVICE may be mostly a collection of skits and gags on a particularly sensitive (get it??) theme, and it only runs about 45 minutes if you’re making your nightly Fringe-binge plans. but its rapid fire style, carried expertly by the impressive clowns at the heart of it all, is almost guaranteed to bring a satisfying climax to your evening of theatre. And sure, I won’t be the only reviewer to end with that predictable joke, but I’m hoping to at least be one of the first. Peace, love and soul,