Marching into March with a loaded calender of Theatre-stuffs to keep you inspired and giddy.  Take your pick!

SABRINA FAIR at the Ottawa Little Theatre. OLT takes on the classic romcom, with cockatoos. Until the 7th.

BANKRUPT At the Gladstone Theatre, from Plosive Productions and Theatre 4.669. Stephanie Turple’s world premiere comedy, with music from the Peptides. What more ya need to know? Until the 14th.

OBAABERIMA at the NAC Studio. Tawiah M’Carthy’s acclaimed one person show about sexuality and identity. From the 3rd to 14th.

URINETOWN THE MUSICAL at Alumni Auditorium, from Fauteux Productions.  If you’re a fan of musicals about urine, then…well, you might have to crash this one, as it’s already sold out! On the 5th and 6th.

CONJURE at the Avalon Studio, from Magic Studio Productions. A magical evening with Zach Counsil and Steven Lafond, making things disappear and stuff. The 6th to 8th.

YOUNG FRANKENSTEIN at Centrepointe Theatre, from Orpheus Musical Society. One of Mel Brooks’ finest gets the Orpheus treatment. The 6th through 15th.

TOUGH! at Algonquin College Studio N118, from Algonquin Theatre Arts. The Gonqs take on George F.Walker. The 11th to 15th.

THE BEST BROTHERS at the Great Canadian Theatre Company. Andy Massingham and John Ng in the latest hit from Daniel MacIvor! From the 10th to 29th.

HAPPINESS(tm) at Arts Court Theatre, from May Can Theatre (part of TACTICS). Are you happy? Because even if you are, this show can make you happier. The 13th to 21st.

ACT at Studio Leonard-Beaulne. From Ottawa U MFA candidate Miriam Cusson. The 12th to 14th.

MY FAIR LADY at the Kailash Mital Theatre (Carleton U Campus), from Balmour Productions.  A classic story gets a modern Arabic twist, for one night only on March 14th!

THE YOUPPI CLUB at Artissimo Cafe, from the Ottawa Stilt Union.  First of a promised series of monthly meetings about…I have no idea. Just be there on the 16th at 7pm.  And don’t forget about the Stilt Union’s weekly Drop-In workout sessions, Sundays at the Ottawa Dance Directive studio!

REXY! at the Gladstone Theatre, from Phoenix Players. William Lyon Mackenzie King, onstage where he belongs. The 19th to 28th.

STRAIGHT FROM THE HARP at the NAC 4th Stage, from Little Green Hat and Ottawa Storytellers. Tess McManus’ Fringe hit TALES SHE TELLS gets reworked and relaunched with some musical accompaniment from Dawn Bailey and Susan Toman! Only on the 19th.

SUBDEVISION at Enriched Bread Artists (951 Gladstone), from a Ton of Artists.  Three days of Site-
Specific mini-plays in a festival of sheer wonder brought to you by the SubDevision collection of artists, including (but not limited to) Emily Pearlman, Horseshoes and Hand Grenades, Skeleton Key, Catriona Leger, and so much more!  From the 19th to the 21st.

THE MARRIAGE OF FIGARO at NAC Southam Hall, from Opera Lyra. Opera! Get dressed up and enjoy. The 21st to 28th.

GOODBYE, PICCADILLY at the Ottawa Little Theatre. Family dramedy to kick off your springtime. The 24th to April 11th.

THE LION IN WINTER at the Ron Maslin Playhouse, from Kanata Theatre. Christmas in the 12th century!  From the 24th to April 4th.

TAKE ME BACK TO JEFFERSON at the NAC Theatre, from Theatre Smith-Gilmour. Southern Gothic tale of tragedy and family all that jazz. The 25th to April 11th.

OTTAWA THEATRE CHALLENGE at NAC 4th Stage, presented by A Company of Fools. Who will win the Rubber Chicken Award? Find out on the 27th!

THE HAIRY APE At the Black Sheep Inn, from Chamber Theatre Hintonburg. From Eugene O’Neill, granddaddy of American Theatre. Premiering on the 27th! Continues into April at the Carleton Tavern. And I’ll be in this one, by the by, so get your tickets now! 🙂

GAME OF BONES at the Velvet Room, from Eddie May Mysteries.  Every Saturday night, killer dinner theatre inspired by the classic Fantasy Teevee series SIGMUND AND THE SEA MONSTERS, I think.

THEATRE 100 at Studio Leonard-Beaulne. A Collection of one-acts from Ottawa U. The 27th and 28th.

‘BOUT TIME at Mother McGinteys, from Crush Improv. Reunion Tour vs. The Princess Parade! Monday the 2nd. And Check out Crush’s One-night Fundraiser show for Juvenile Arthritis at O’Grady’s Outpost on the 7th!

A CHEST FULL OF BOOTY at the Lunenburg Pub, from Hall of Justice on the 15th.

GRIMPROV every first and last Wednesday of the month at the Cock and Lion! Wednesday the 4th join them for a bout of ELEMENTAL IMPROV. 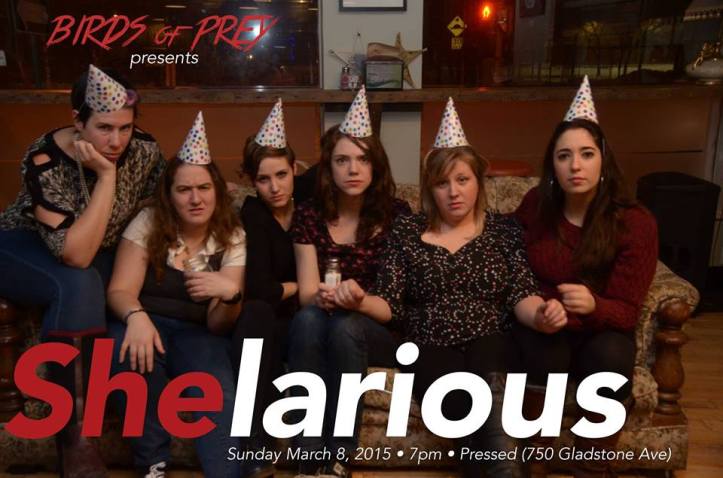 SHELARIOUS at Pressed Cafe. Hosted by Birds of Prey from Experimental Farm Theatre, an all-gal night of comedy in celebration of International Women’s Day! Sunday the 8th.