It was a trifle bananas at the National Arts Centre this past Saturday night. Shows in every theatre, fancy parties in dress mask, Winterlude nonsense, the Rosetta Persons band (that’s their name, right?), a goofy DJ in the lobby even…the joint was jumpin’, and no mistake. It took some maneuvering for myself and my uber-talented (if somewhat fragile) Fringe collaborator Madeleine Hall to make our way into the theatre for the latest entry in the NAC’ English Theatre season. But we done it, and without a moment to spare!

The latest show on the big stage is David Hare’s STUFF HAPPENS, a dramatic retelling of some of the worst offences of the infamous George Dubya Bush administration…and boy, do they have a lot to choose from. It was one of the things I’d been concerned about heading into this one…that the show would merely be taking potshots at a group of politicians so infamous and damned by history already that it’d be like lobbing beach balls at a barn door. How could you possibly miss?

But Hare has more depth in his storyline than that, offering a meticulous blow-by-blow look at the event’s of 9/11 and the ensuing ramp-up to war in Iraq. Director David Ferry puts the hefty NAC ensemble to good use, with a few talented add-ons to flesh out the massive cast of characters. It reminded me a little of their recent ALICE THROUGH THE LOOKING GLASS in sheer scope, and like Alice, we’re definitely down a rabbit hole here. All the more spooky because this one was real. 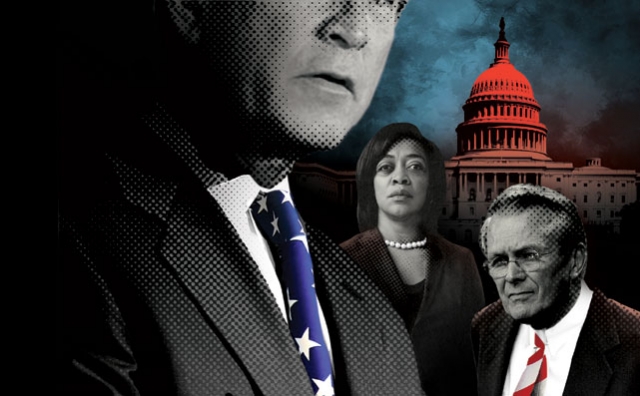 Following the rise in power of Dubya (Stuart Hughes) and his manipulation of world events to achieve his aims, the show uses a variety of POV’s to tell the labyrinthine story. Of course, we follow the main players on their respective paths…Bush is backed by his cohorts Donald Rumsfeld (Greg Malone, who masters the classic Rumsfeldian nonspeak of talking at length and saying absolutely nothing), Dick Cheney (Paul Rainville, snarling it up), Paul Wolfowitz (Andy Massingham) and Condoleeza Rice (Karen Robinson), as well as his chief ally in the push to war, British PM Tony Blair (Christopher Morris). Along the way he’s hampered by various parties, like French Foreign Minister Dominique de Villlepin (Peter James Howarth) and weapons inspector Hans Blix (David Warburton) who wants nothing to do with all the politicization of his efforts. In the middle of it all, in a sense, is the altruistic Colin Powell (Andrew Moodie in a sensational turn), a staunch advocate of doing things the right way who slowly but surely lets his principles slide by the wayside in one of the most engrossing arcs in the whole story. Some of the more effective moments in the lengthy show are actually random moments from lesser players and ordinary citizens, offering their commentary on what is happening in the world around them, most memorably for me Natasha Greenblatt as a Palestinian scholar and Amy Matysio as a British woman in New York. But other great moments abound, like Bush and Blair scheming and plotting amidst a living forest comprised of the other members of the ensemble.

This is a helluva show to see, a lot thanks to some sweet set and light design from Gillian Gallow and Glenn Davidson. The story is presented inn a very documentary-style format, which could lead to a few spots of lag in the daunting 3+ hour runtime…but thankfully (or woefully, depending on how you look at it), the Bush administration has no shortage of dire events to fill it all to the brim and more. A clever framing sequence with Herbie Barnes as a Janitor, sweeping up the neverending debris and offering prophetic words, works beautifully. Strong performances and important subject matter throughout in a strong show that is a fitting final showcase for this year’s ensemble. I’d let myself forget a lot of the horrorshow that this time in history entailed…this show is a fantastic reminder that we can’t let ourselves do that. The next Iraq War is always looming, just around the next corner. Peace, love and soul,