This week I got out to Arts Court to see two premieres, and one long awaited return. And it all happened at the same show. And while Arts Court IS a pretty weird old building, I have as yet discovered no working time/space fractures within its mismatched, uneven hallways.

So what am I yammering about? YOUNG LADY IN WHITE, natcherly, the world premiere play from Dominic Parenteau-Lebeuf, as well as the premiere show in the inaugural season of TACTICS, a new collective series put together by the Counterpoint Players to give smaller companies a better chance to mount larger productions. And the return was of my old pals Evolution Theatre, long a fav’rit of mine in the Ottawa Theatre scene, and a tad quiet since the awesome HROSES a while back (well, there was a baby behind the scenes what needed tending to as well, so there was that…gotta get that new generation of theatre-lovers started, after all). I tend to get pretty excited when they show up with something new, and this show was no exception, especially after seeing a reading of it a few months back. This week it was finally ready to hit the stage.

A story spanning decades and covering an intimidating amount of recent world history into the narrative, the show wonderfully centers around the image of a young girl…literally the undeveloped photonegative of a German teen dressed in a white nightgown (played in an unmissable performance by Catriona Leger), snapped by a photographer in the early 1930’s. For reasons that would remain hidden for quite some time, the photographer never turns thee girl into a real picture, leaving her a shadowy version of her former self, hanging on a line in his darkroom. She, the negative girl in the image, waits patiently to be developed, snarling at the images of the photographers sexy sweetheart that get developed by the hundred while she gets left by the wayside. Soon, however, the photographer and his galpal up and abandon the studio (Germany being somewhat inhospitable around that time), leaving the young lady in white to her thoughts, and the sole companionship of a hastily drawn cat named Chada (voiced by Zach Counsil). Over the following decades, the young lady and Chada bear witness to history from their castle-like refuge, watching the rise and fall of the Third Reich, dance fever in America, the Berlin Wall, the Munch Olympics, 9-11 and more. All the while the young lady desperately waits for her photographer to return and develop her…or explain why the Hell he never did in the first place. 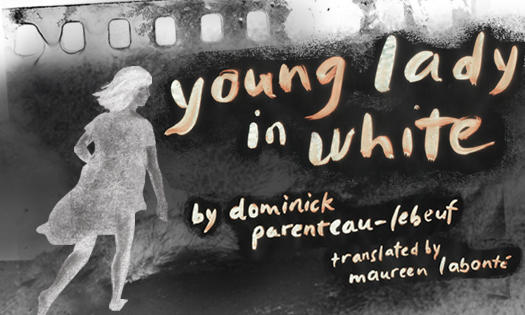 Though visited by various intruders across time (all played by the always wonderful John Doucet), the young lady is mostly left to her lonely reflections and observations, contrasted with the wildly swings of world history spinning outside her walls. At the heart of it all is Catriona Leger, mostly alone on stage (an impressive multi-level achievement from Patrice Ann Forbes) with damn near two hours of dialogue to deliver single-handed, and she does it with an energy that will leave most of us ashamed for how lazy we are. Her young lady is endearing, powerful and unique, and one of the most impressive character performances you’re liable to see around these parts for a good long while. The gorgeous but startling makeup effects from Vanessa Imeson are a bit jarring at first…or at least, I was taken a bit aback, because they really are something else…but after ten minutes I hardly even noticed anymore.  And how could I not recommend a piece of theatre that has an honest-to-gosh animated cat as one of its principal characters? Shoutouts to Adam Pockaj, Steven Lafond, Pierre Ducharme and Andrew Alexander for the considerable multimedia work one into this show, and director Chris Bedford for somehow bringing it all together, in captivating fashion And one more time for Catriona, who brings everything she’s got to the stage, and it shows. You can catch this show at Arts Court Theatre until the 15th, and you really probably should. And TACTICS continues in the New year with Lisa Jeans’ LIGHT, so put that one on your to-do list as well. Because this series is off to a damn fine start. Peace, love and soul,