Last show of an already pretty sweet Monday night, and it was back to the OddBox with some cool pals (Hannah and Jodi of RACHEL & ZOE, among other dignitaries) to join a pretty decently large crowd for this timeslot. Say what you will about the Ottawa Fringe festival, but we do not suffer from the Monday night blues. The crowd was anxious, and so was I.

The show, GETTING THROUGH from Loose Cannons Collective, stars some recent Ottawa Theatre School alumnus, Phil Merriman and Alexa Higgins, in a brand new 2-person play about a five-year marriage on the rocks. A well off couple, Aaron and Abigail seem to have stagnated, barely communicating and taking their few words to dangerously passive-aggressive levels when they do. Their unfolding troubles are interspersed with flashbacks from each of their lives, as we see Aaron growing up with his depressed Mother, and Abigail’s trials with a sickly Father. Their own early relationship is glimpsed, early courting contrasting with the bitter divide they’ve come to. 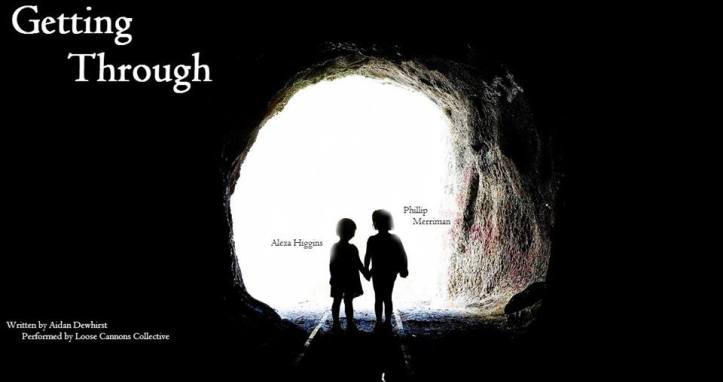 Written and directed by fellow OTS alum Aidan Dewhirst, this is a sharp and demanding script, and happily it is matched by two strong leads who work exceedingly well together. The many transitions, sometimes a little tricky to follow at first but never for long, are handled smoothly and with considerable inventiveness. Merriman and Higgins tackle the material wholeheartedly and bring it to vibrant and occasionally painful life, as she script doesn’t pull punches and doesn’t shy away from bitter realities. A strong and standout debut from a new company that I hope we’ll see continue to work together, and a really great drama to sink your teeth into at this year’s Fringe. And a great way to end a great Monday. Peace, love and soul,