This week was the premiere of the last show of the NAC’S 2013/14 season, and Jillian Keiley’s first season as AD. Natural then that she’s direct the show, one she brought over from out East where she directed it the first time with Artistic Fraud of Newfoundland. That’s where she and writer Robert Chafe collaborated to create OIL AND WATER, the show now gracing our stage as a fitting finale to the season…it would sure be a hard act to follow.

Based on a true story, the play tells the long story of Lanier Philips, at two crucial points in his life. First, as a sailor in the US Navy during WWII (played by Anderson Ryan Allen), struggling under entrenched racism as a black recruit; and then as a Father in 1974 Boston (played by Jeremiah Sparks), trying to send his daughter Vonzia (Starr Domingue) to one of the first integrated schools in the city. In both cases, violence and disaster were lurking just around the corner.

Living in cramped quarters with fellow recruit Langston (Mike Payette), and under constant scrutiny from demeaning fellow sailors like Bergeron (Clint Butler), it should almost come as a relief to Phillips when his vessel hits the rocks and starts going down off the coast of St.Lawrence, Newfoundland. Except that his superiors expect him to stay with the ship, but as Phillips himself declares, he’d rather die kicking than waiting.

What’s waiting for him are the people of frigid St.Lawrence, a town with their own intimate knowledge of oppression….instead of racism, their master is poverty, and the local mine. Violet Pike, a local housewife (played by Petrina Bromley) watches in not-so-mute frustration as her husband John (Jody Richardson)’s health deteriorates before her eyes, and nephew Levi (rushes to follow in his late Father’s footsteps down in the depths. They’re a community with precious little to give, but when the shipwreck occurs off their shore, they rally and work tirelessly to save whoever they can…including Lanier Phillips, the first black man anyone in the town has ever seen. What happens next changes the course of Phillips’ life. 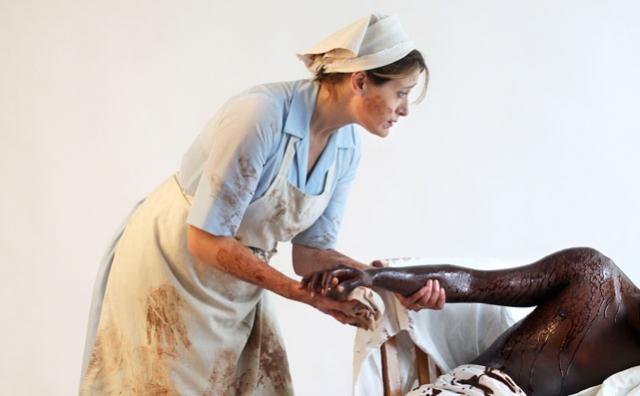 Years later, as his daughter experiences first-hand the kind of hatred Lanier had hoped he’d left behind years ago, only a photograph of St.Lawrence (from excitable local photog Ena, played by a delightful Alison Woolridge) stands as a reminder that things can and should be different, a counter to the constant refrain of bitterness coming from the spirit of his grandmother Adeline (Neema Bickersteth).

It’s a staggering show, for as many reasons as you’d care to count. Performances rock across the board, with both young and elder Lanier’s providing strong leads throughout. Petrina Bromley is terrific as uneducated but unwavering Violet, and holy Hell, the power coming out of wee Starr Dominique could keep the lights in the NAC running until the next century. Keiley and Chafe have made something just astonishing here, starting from his fantastic script and running from there…designer Shawn Kerwin’s sextant-set works beautifully, and the musical score by Andrew Craig and Kellie Walsh, a melding of Southern gospel and Newfie folk music, is gorgeous down to the last note. I learned plenty of history in this show…some I’m warmed by, some I’m goddam furious about…but the beating heart about the nature of humanity is impossible to ignore. A powerful piece of work that’ll stay with me for a long, long time. Much thanks to Keiley and the gang for bringing this one inland. Peace, love and soul,