the Benevolence of Evil

Last night I saw two great pieces of theatre. The first was actually a movie, Jim Jarmusch’s MYSTERY TRAIN that I caught at the Bytowne cinema while I had some time to kill, and I can’t believe I hadn’t seen this ‘89 beauty yet. It was so cool and so great that I already forgive Jarmusch for the goddam vampire movie he directed, whose trailer preceded the film. Fucking vampires…come off it. But MYSTERY TRAIN? That was pretty boss.

But as noted, I really only hit the movies to fill up some time between work and theatre, the usual two sole modalities of my existence (besides drinking alone, but I’m only human). This night I was off to good old Arts Court to catch the latest from Counterpoint Players, least seen hosting a few performances of Bronwyn Steinberg’s delightful one-hander OCCUPY ME. Bronwyn, Counterpoint’s artistic director, directed this latest ambitious production, thee world premiere of Darrah Teitel’s CORPUS. I lucked out and bumped into OTS superstar Alexis Scott en route to the theatre, so we got to take in the tale together. And damn, what a tale.

CORPUS takes place in two times and places. One of those places is Auschwitz, and the time is. You guessed it, WWII, or the waning days thereof. Here we meet young SS wife Eva (Colleen Sutton), whose husband, smelling blood in the water, has arranged for a Jewish prisoner (Eli, played by Eric Craig) to teach her Polish. But Eva has bigger plans than that, including escape for her and Eli both.

Meanwhile, 60 years later in Canada, excitable undergrad Megan White (Sascha Cole) is stalking war criminals in online chatrooms, and happily letting her mentor Homer (John Koensgen) take all the credit. Enter Heinrich (Daniel Sadavoy), a German squeegee kid and hacker who tracks Megan down and begins an online affair with her, but with an ulterior motive…his grandmother is none other than Eva herself (Laurie Fyffe) and she want to tell her story before it’s too late. But will she tell the REAL story?

Now right off the top, I know what you’re thinking…a play about the holocaust? HEAVY. But step back, McFly, because there’s a lot more to CORPUS than meets the eye. The play does delve quite merrily into murky philosophical ground like the nature of evil and how our circumstances shape our reactions, and offers more than enough food for thought to fuel many and after-theatre conversation for hours. And certainly, the war-year scenes are tense as Hell, with Colleen ‘Ridergirl’ Sutton positively fucking chilling as the calculating Eva. And Eric Craig, who last impressed the Heck out of me at the Extremely Short Play Festival, is just jaw-droppingly good as Sonderkommando Eli, a walking contradiction who find himself in another impossible moral scenario against his will. Laurie Fyffe bridges the gap between the eras beautifully as the frail, failing elder Eva, haunted by the ghosts of her past with the aid of some brilliant staging by Steinberg. 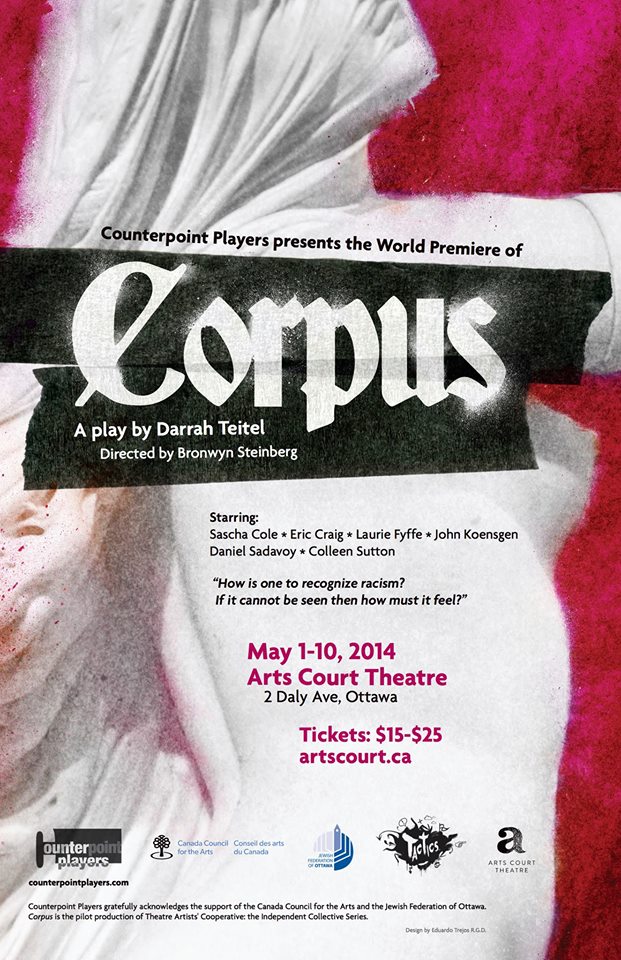 But I have to say, the thing that shocked me the most about this show wasn’t the charged content or subject matter, but the relationship between high-strung and dorky Megan and the weirdly endearing Heinrich. What starts off as a strange bit of cyber-stalking subplot turns very smartly into one of the best 21st century love stories I’ve yet seen on a stage. Sascha Cole is ridiculously loveable as Megan, especially in a fantasy sequence in which she imagines her success as revenge against all her mean old middle school profs. Her and Heinrich (a marvelous Daniel Sadavoy, giving the play much needed joy) are an utter delight with every interaction, almost always staged using projections to reflect their faraway, online status so you can choose whether to watch them in real-life or onscreen. And while Megan’s relationship with Homer was a touch too reminiscent of GOODNIGHT DESDEMONA for comfort (this sort of mentor/student abuse must happen all the damn time), this is the most fun I’ve seen John Koensgen having on stage in a while, and I loved it.

To sum up…CORPUS is one of the best shows of the year, in a year that’s already had some amazing shows. Miss it at your peril, my friends, these are theatre pros at the top of their game and they came to play. Utterly engaging, wonderfully directed, and potentially bitterly divisive…what more could you ask for? Peace, love and soul,