To See if I Still Feel

Because I seem to despise having time off, and I do use my time off just terribly, I managed to squeeze in a few more shows last week, after THIS IS WAR and AGE OF AROUSAL.  One was a fun night at Red.Collective’s OFF THE CUFF variety event, featuring Kara Crabb’s THE STILLBIRTH, directed by Norah Paton and starring Mike Showler and Noa Nussbaum…A very smart and cool script done well inside the SAW gallery staging area.  Plus original performance by Tony Adams and Tess McManus, and X-rated Xmas standup from Jonah Allingham. It was a great, fun evening, and ya better believe I was glad I made it out.

The other show was one I caught down in the Glebe at the Avalon Studio, EMPIRE OF DIRT from New Ottawa Repertory Theatre (aka NORT).  I’m all for a show named after a line from a Johnny Cash song…and yes, I know it was a Nine Inch Nails song first, but NOW it’s a Johnny Cash song and that’s all there is to it.  Don’t worry, they use both versions in the show.  Had some Nachos and pre-show drinks with schoolchum Madeleine, and then headed over to see what this one was all about.  Jodi Morden was stage managing, so we knew it HAD to be good. 🙂

Writer Doug Phillips also stars as Del, a working class stiff who is riding a disabilty layoff, for what I don’t think we ever fully learn.  But he’s gotten quite accustomed to his life of leisure, much to the chagrin of his hard-working wife Paula (Jen Vallance), and even more accustomed to the powerful pain medication he’s being prescribed.  Where he initially went days or weeks without popping one, suddenly his prescriptions aren’t quite lasting long enough.  His keen-eyed daughter Tina (newcomer Kelsie Bennett) has taken note of Dad’s increasing reliance on the meds, but both she and Mom seem powerless to get Del to do something about it.. Then, a fateful impulse purchase of lottery tickets turns Del’s life for an unforeseen loop…and not as you might expect. 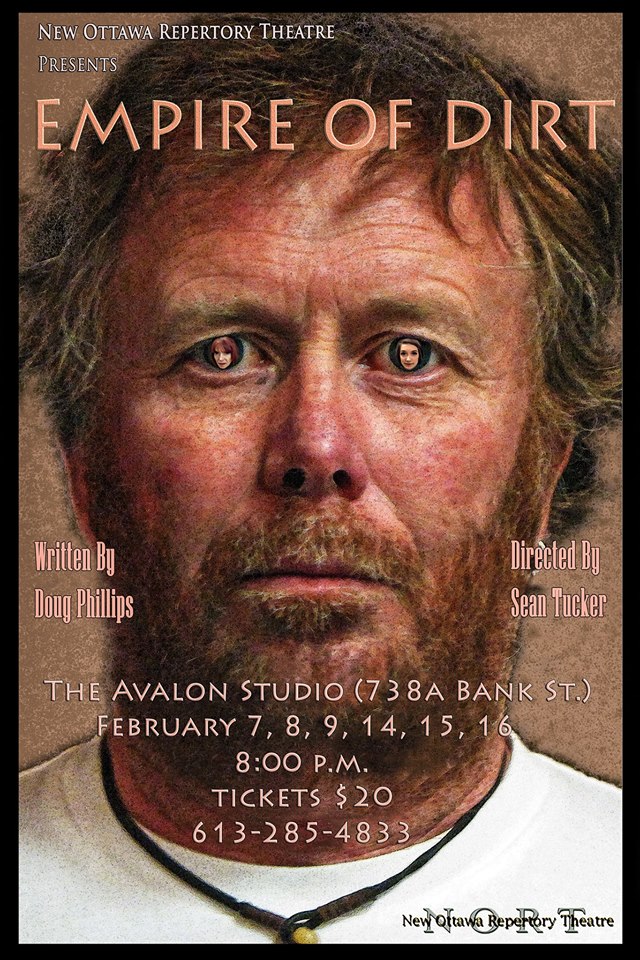 EMPIRE is just about as harrowing an experience as you’ll have in an Ottawa Theatre this year, I’d reckon, and if not then I can’t wait for the show that tops it.   This one is raw and real, folks, uncomfortably methodical and silent as we watch Del spiral further into government-sanctioned addiction, denial, aggression and worse.  I had an issue or two with the pacing of the show, but that’s my own taste, and maybe I was just feeling justifiably creepy-crawly at the unflinching show going on before me…this one kinda DARES you to look away sometimes.  Phillips has turned out a solid, simple and truthful script, a pared-down, narrow lens look at how a perfectly cool family man can be turned into something quite other by some perfectly legal drugs. Jen Vallance is great as suffering supporter Paula, and Kelsie Bennett is a wonderful find as Tina, matching presence with the other actors on stage quite nicely…she and Phillips in one of the final scenes are positively chilling.  This isn’t the most polished show around, nor should it be…Director Sean Tucker keeps the focus on the actors and the script. And if it doesn’t get you talking afterwards, then it might just be because you’re speechless.  Important stuff, and very worth a look.  It plays again at the Avalon from the 14th to 16th.  Peace, love and soul,