Well, I know I’m late/nonexistent these days with the reviews, but I can still be of SOME use around here.  As for example…we all love Fringe, right?  If you don’t you’re an awful person, so just say yes.  Well, tonight starts a three-day double bill teaming up two beloved shows from this past June’s Ottawa Fringe Festival, over at the Arts Court theatre.  In the tradition of last year’s successful 2-bill of SPACE MYSTERY FROM OUTER SPACE and ALIEN PREDATOR: THE MUSICAL, this year Dead Unicorn Ink and Punchbag Playhouse have gotten together to bring us the BENT SPRINGS AND SHAMBLING THINGS event, featurig the horror/comedy duo of CHESTERFIELD and DIE ZOMBIE DIE.

DIE ZOMBIE DIE from Richard Hemphill is a grand period zombie mystery featuring Ray Besharah, Dave Benedict Brown, Victoria Luloff, and a cast of shambling undead hordes being used by director Stewart Matthews in ways that you really have to see for yourself.  This show won best of venue at Academic hall, not an easy place to fill, so if you missed it (or just wanna see the fun again), this is your chance.

CHESTERFIELD by Patrice Ann Forbes is one I missed at Fringe, so I’m delighted to get a second crack at it.  Dead unicorn Ink has a solid rep as the funtime, b-movie heroes of Ottawa Theatre, seeing the gang tackling a cannibalistic couch bodes well, all under the direction of Sylvie ‘Patti Stream’ Recoskie.  All this fun is just 20 bucks and starts at 8pm this Thursday thru Saturday nights and yes, the bar will be open in the studio.  What, have you got something better to do?  Get moving!  Peace, love and soul,

KevinReid, the Visitor (and Winston) 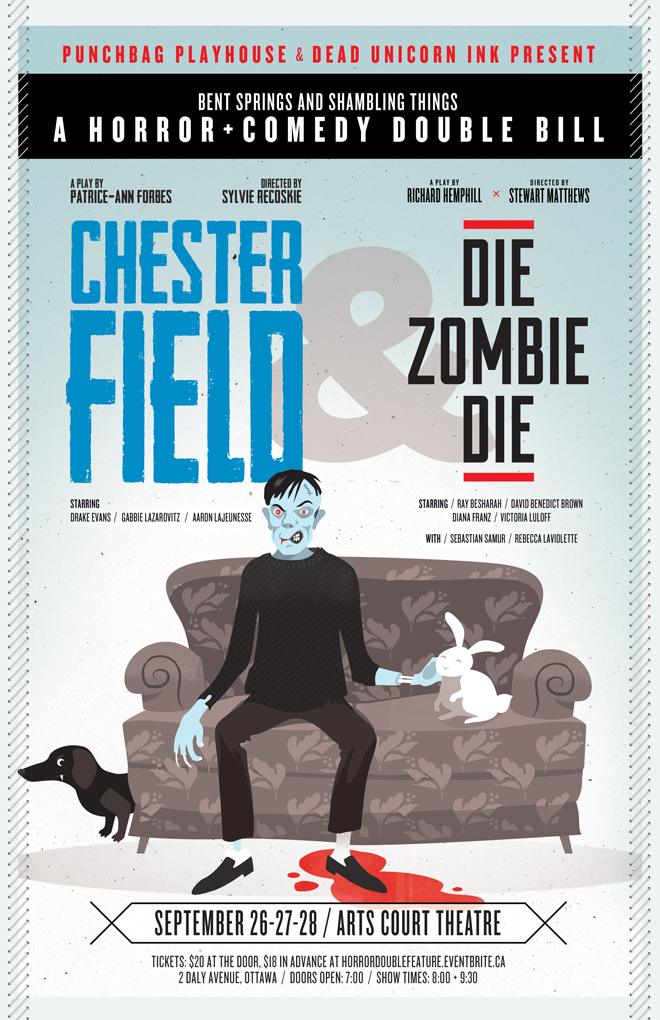