Crushed! The End Was Here.

Well, all good things must come to an end, because the universe is just terrible.  And here we are, post-MY SUMMER CRUSH and wondering where it’s all gone.  Lucky for you I’m a lazy little shit sometimes, and have yet to post this, my final report on the closing weekend shenanigans!  And yes, I actually made it out to the shows and workshops this time, and won’t be subjecting you to a review of my latest CHUCK marathon instead.  Not that I don’t have anything to say about that series finale (sigh).  What was with that lame villain, anyways..?

But on to business!  Since I’ve got so much to cover in this post, we’re breaking it into three sections…partly for efficiency, but mostly because I, like Anders Yates, LOVE lists.

Friday was my return to the Summer Crush series after a few crumby days of sniffling and sneezing and being a general sick creep.  So I may not have been at my high-energy best when I stepped into that afternoons workshop from the swell lads at Montreal Improv.  But Brent and Marc from MI had all the energy and then some, and our little group would just have to step up or get flattened.  The workshop was all about intention, or exploring the why of your improv character, and they tossed us into it straightaway with an exercize…each of us was assigned a secret desire, then we all jut mingled party-style.  When it was over, we all sat down and tried to figure out what everyone else’s character really wanted.  It was a tricky one for me, as my aforementioned low energy had me kind of lurking in the background for half the party.  But it was still pretty informative.    Next we did some smaller scenes, still informed by the one secret desire, and explored the different ways the character’s wants could express themselves…I found myself flashing back to ‘tactics’ from my OSSD acting classes.

We got into some bigger 4-person scenes, then…each with its own setting and characters, but each assigned a different attitude towards the other characters…ie: everyone in the scene I participated in had to pick one person on stage to think was always hilarious, another to treat like they were a celebrity, and a third to treat as if they were terminally ill.  Which becomes tricky when you’re trying to do a scene about watching a football game, but also takes it in pretty fun new directions.  Kudos to Andrew for ending the scene like a champ by falling off his chair…that Andy Massingham workshop has clearly sunk in.

The lads gave us plenty to chew on, and apologies for how much I’m likely forgetting to write down here, but that’s what happens when I wait days and says to write about something.  We had a little break between workshop and show, and I had me a sammich and donut, and returned to arts court ready for the evenings festivities when a surprise came upon me. Having only expected to watch the show, AL Connors up and asked if I wanted to join in with the onstage opening act (I’d missed my scheduled performance the day before).  That main improv tenet of always saying yes kicked in, and I found myself in the theatre, warming up with AL, special guest-star Colin Munch, Ray Besharah, Andrew, Adam and Jennifer.  Honestly, I think the crazy shit we warmed up with might have been better than what we did on stage, although that was pretty fun too.  Did an options scene with Ray and Colin (Hurray for Captain Planet!), a quick round of Questions that Jennifer handily won, a bit of good old foursquare which I THINK I’m getting better at…it was a fun surprise, and I’m thankful to AL for asking me up. 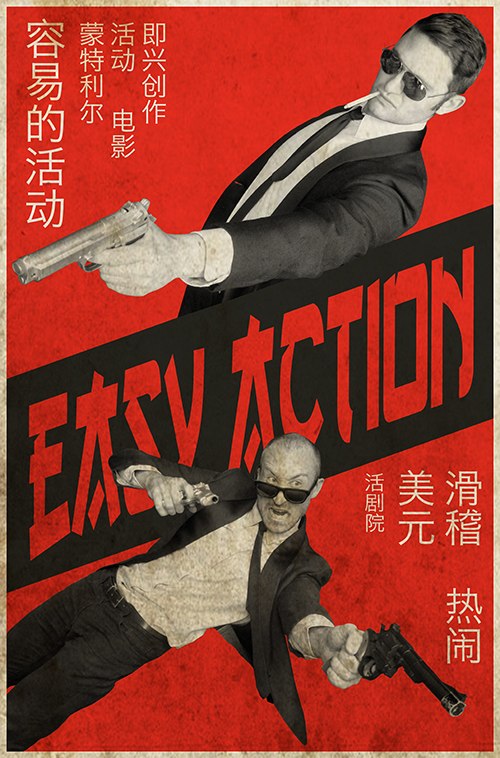 But better stuff was to come, as Brent and Marc hit the stage for their EASY ACTION show, an improvised 2-man action movie That…wow.  This show was so awesome I think I might be pregnant now.  Setting their tale in the Florida everglades after an audience suggestion/story, they blasted out with a show filled with evil redneck developers, elderly bystanders, a tortured explosive expert and his moody teenage son, swamp people, and of course, giant walking trees. Watching these two cats juggle multiple characters, accents and on-the fly plotlines was a funky kinda magic…having their own music cues was the icing on the cake.  I continue to be amazed at the ridiculously high calibre of talent Crush Improv has managed to corral for this series…and I had one more night to be impressed.

Part 2: VERY MUCH CALLED FOR

Saturday was the final day of MY SUMMER CRUSH, but it was not to pass idly.  This was, after all, Uncalled for Day at the crush, and the last and longest of the workshops was set to begin at noon sharp (a pleasantly threatening e-mail from HM, had plenty of bums in seats on time for a change).  This was the much anticipated Sketch Writing workshop hosted by Anders Yates, and to my delight Colin Munch decided to co-host the shop with him.  Everyone pulled up a table and a notebook…yes, we were writing BY HAND, internet, that’s how hardcore this workshop was…and the lads started putting us through our paces.  A few timed writing drills, two minutes or 5 of solid scribbling, just to get us in the right headspace…led us into a discussion of where to look to find the hook, or as Anders put it, the ‘game’ of a scene.  We did some more quick timed writing, this time with a dialogue-heavy slant, then had to surprisingly share it with another workshopper, who got to try and imagine places to go with it.  Anders and Colin are both big advocates of showing your work to others if you’re blocked (or even if you’re not), and this was a pretty good argument for it.  Kind of amazing what a new pair of eyes can come up with.

A bigger team exercize had us brainstorming all sorts of simple words and phrases, as many as we could come up with, off of a central theme…me, T-Lev and Laura Hall got ‘Chores’…and then come up with at least 5 different sketch premises based on some combination of whatever we had on the page.  It was a pretty energizing idea, especially when we handed our lists off to someone else, and then had to choose an idea off someone ELSE’S list to attack as a sketch for 15 minutes.  And once we came up with something, it was then time to hand our sketch off to yet another group, and try and rewrite or finish whatever we got in return.  It was some challenging fun times, and I hope it rekindled a bit of that old creative writer lurking underneath all of my bloggery.

A little break for dinner, and my third and final visit to Smoke’s of the series (I think we need a break ourselves now, Smoke, no offense), until back to the curt for UNCALLED FOR in all their 2-man glory, performing their Greatest Sketch Hits show.  Anders and Colin showed pretty fucking convincingly that they know what they speak of in the sketch comedy game with this rapid-fire collection of bits, one funnier than the next.  Highlights include Russian mafioso, Cupid’s troubled home life, time travel mishaps, and astronauts in love.  The ending was so perfect it might be an insult to the Creator.  An incredible end to an incredible series.  But WAIT..! 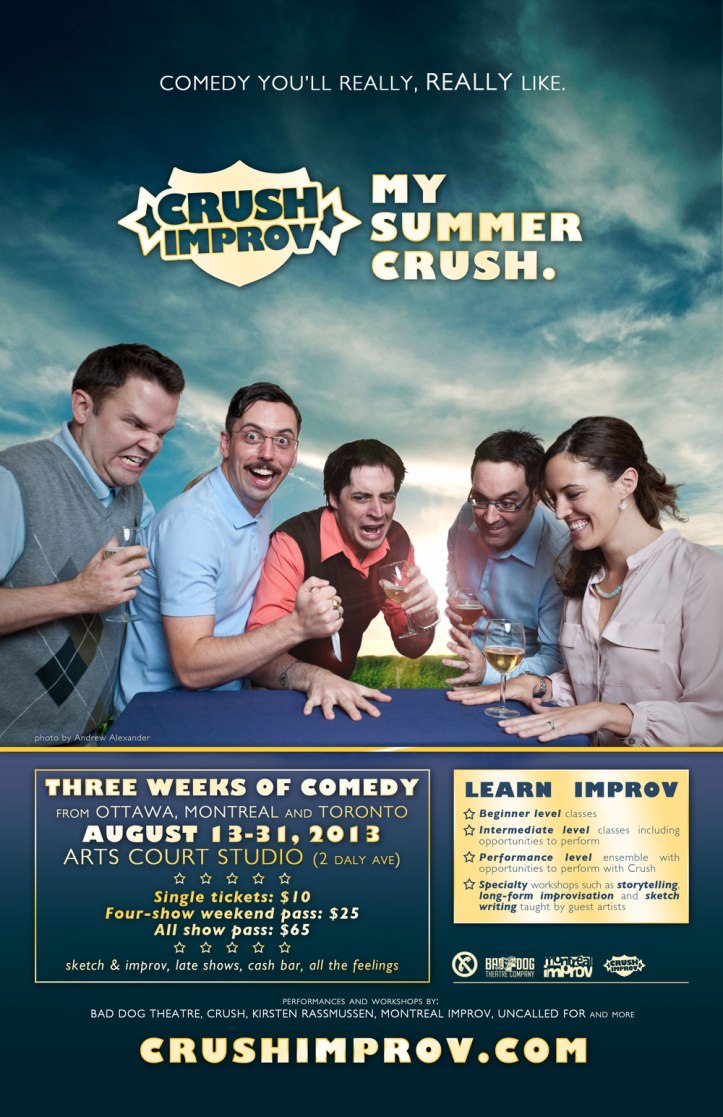 That’s right, it was now time for the final LATE SHOW of the series, and of course all bets were off at this point.  People were feeling good, the shot-ski was out and ready for action at the bar, and Crush  was in fine form.  They performed the first set with the lads from Uncalled For, to the delight of everyone assembled.  Afterwards they opened up the floor, inviting all the various improvisers in the audience up in shifts to play a few games and put the finishing moves on the night.  And yes, even I went up in the second wave, doing a marathon session of “I want to see a scene called”, in which Dan Lajoie made the glorious mistake of setting himself up to be alone onstage, which led into a rather seriously epic 7 minute monologue on the good old days that no one present will EVER forget.  For my own part, I got up a few times, and I think I am now closer than ever to perfecting my Rubiks Cube mime.

Which brings to the really real end of MY SUMMER CRUSH.  I have a lot of feeling about this years’ series, all of them good or better.  A lot of you folks missed a lot of this series, and you made a terrible mistake, I can tell ya right now.  Crush Improv, especially AL and HM Connors did an incredible job putting this baby together (major props to all the awesome volunteers, too). The kinds of workshops they presented in this series are worth their weight in gold, and I consider myself 20 kinds of lucky to have had the chance to benefit from them.  I’ve now improvised in full sets three whole times, in front of an audience even…and even as recently as 2 years ago I wouldn’t have ever imagined myself doing that.  And while I’m not gonna say I’m any good at it, I will say I’m about 100 times better at it than before this series began.  And all the friendly faces I met and reacquainted myself with at this affair was unbelievable…all my love to Ryan, Kevin M, Jillian, Jennifer, Andrew, Adam, Leah, Liz, Travis, and everyone else I’m forgetting here.   HUGE thanks to Dan, AL, Kirsten, Chris, Tess, Anders, Colin, Mark, Brent and Andy for the amazing lessons and good times at the workshops. To everyone for the shows…TOUGH!, EASY ACTION and Uncalled For’s GREATEST SKETCH HITS (which I’ll admit, needs a catchier title) were fucking incredible, as were the new views of May Can’s great HAPPINESStm and WOLVES>BOYS.

I’m already looking back at the last 3 weeks, and thinking of them as my own personal good old days.  VERY glad to hear they’ll be back again next year, and I’m already looking forward.  And in the meantime, Crush and the gang will be back in a week at the Heart and Crown in the Market for their regular ‘BOUT TIME show, this one happening on my first day of school at OTS.  Sounds like a celebration to me…I’d better see you there.  Peace, love and soul,