So the Fringe is over, but as it turns out there’s still plenty of theatre to be had here in Ottawa.   Now that my own show has wrapped up, I’m finally free to partake of some of the ONE NIGHT ONLY series taking place for the first time ever at the Gladstone Theatre this summer.  The brainchild of Ottawa’s Steve Martin, the series features a dazzling variety of acts every Thursday thru Saturday evening for pretty much the whole summer, and it’s a great idea.  Last night was my first night hitting the event up, and I was excited for it.  I met up with Nick and Rebecca from THE FIGHT for a few pre-show drinks, then hustled it down to the Gladstone…and yeah, it felt weird to be there in summer, but whatever..!  For my first show of July.

That first show was one I was pretty stoked for…Backpack Theatre’s SUMMER OF ‘34: REDUX, created and performed by Jonah Allingham, so recently my awesome co-star in our Fringe show THE TRAGICALL HISTORIE OF NICK WADE.  But ‘34 is a story Jonah’s visited before, presenting the original version of this piece at the inaugural FRESH MEAT festival last year (and stay tuned for news on the 2nd installment one of these days!).  He’s retooled and expanded it for this new run…after last night at the Gladstone, he’s taking it a short walk away for a three-night run at the Happy Goat Coffee Company.  And if you weren’t there last night, then you should definitely plan a trip.

A slice of no-frills Canadiana, ‘34 tells the tale of Jim, a born loser drinking away his sorrows at the Elmdale Tavern back in the day.  He’s lost his job, his beloved younger brother is sick with polio, and he doesn’t even know where he’s going to sleep that night.  Things get turned upside down when an extremely dodgy, but potentially lucrative, business transaction falls into Jim’s lap.  A terrific encounter at a secluded farm follows, and our hard-luck hero sets off on the road, pedalling for Kingston on a stolen bike like the devil himself was after him.  The scene is set sparingly and just right, with assist from new show director Leslie Cserepy and sound designer Lewis Caunter.  Simple props are used with maximum impact (sometimes literally), and Jonah’s stripped-down, painfully honest storytelling style fits the material to a T.  The play hits about 40 minutes in length, and to be honest I would have been happy with a little more.  Maybe next Fringe..? 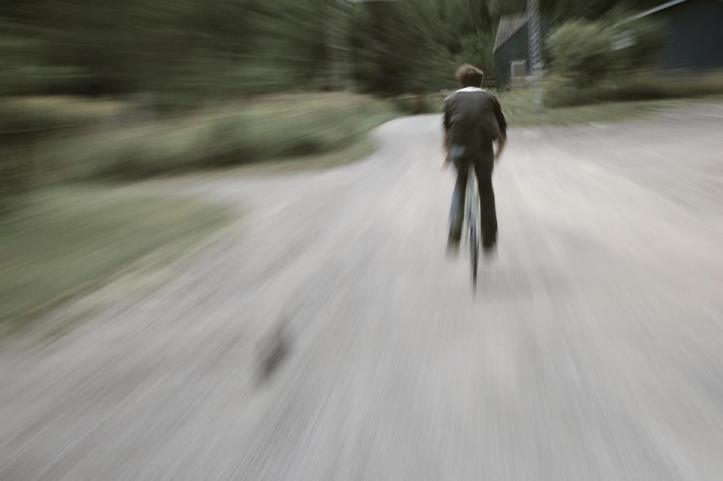 Like I say, you’ve got three more chances to catch some sweet, heartfelt and brutal stagework from a dude who just very rightfully got named as one of the Future of the Fringe…come on out and see why.  Peace, love and soul,