This is the fourth year in a row of Zombie shows at the Fringe, by my count, after previous years’ NIGHT OF THE LIVING IMPAIRED, PLAYING DEAD and LEFTOVERS.  This time around, Fringe legend Punchbag Playhouse takes a swing at the undead with their hilarious return to the Fringe, DIE ZOMBIE DIE.

Written by Richard Hemphill, the ambitious show takes a fast and funny look at an alternate reality of sorts, where humans and zombies live together in a tenuously peaceful coexistence.  The undead in this tale won some civil rights after eating more nazis than allies in WWII, and now exist as a sort of politely tolerated cheap labour force.

This doesn’t sit well with some, like hard-boiled Zane Slade (Ray Besharah), who loathes zombies with open disdain (understandable, after what they do to his office).  Likewise legendary zombie slayer Zelda (Diana Franz), who is forced to take out-of-country jaunts to get her undead murderlust filled.  But when a killer starts taking out zombies in similar fashion to Zelda’s old adventures, her daughter Zoey (Allison Harris) comes to Slade to help clear her Mother’s name. 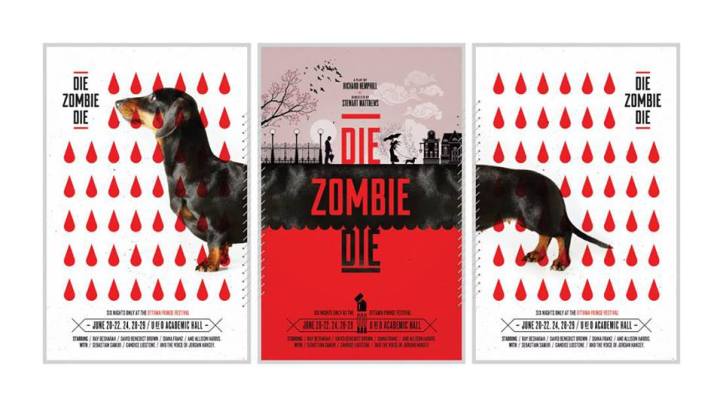 …and that’s the plot, which is pretty cool but kind of secondary to the hourlong assault of one-liners, clever wordplay, terrible puns and wonderfully hammy acting from the gang (and especially Dave Benedict Brown, filling a variety of roles).  Assisting ably on stage is a veritable army of the living dead, shuffling about and becoming the walls, countertops, tables, and somehow wringing huge laughs out of selling popcorn.  Director Stewart Matthews makes a merry romp of this show, juggling over a dozen performers at a time into a smoothly-moving unit of kitchsy comedy goodness.  Several zombie-themed advertisements play out in front of us, a very funny touch and making for a nice scene changing gimmick.  And the Who’s-on-first-inspired bit between Ray and Dave has to be seen to be believed.  It’s a terrifically entertaining show, and I can understand why it’s getting the buzz it has.  Catch it while you can…zombies don’t come much funnier.  And yes, there is a dachsund.  You’ll love it.  Peace, love and soul,