I first met Victoria Luloff a couple of years ago when she was in the graduating class at the Ottawa Theatre School.  As part of her final year she appeared in three productions, including IN THE EYES OF STONE DOGS with Evolution Theatre, WE WANT LIFE by Andy Massingham, and THE SUICIDE…a hilariously grim Russian farce directed by Pierre Brault that went on to play at least year’s Ottawa Fringe Festival.  This year, Victoria is back with her own creation, THE DAY WE GREW WINGS which she wrote and co-stars in.  She’s a pretty awesome gal with an infectious, mischievous smile and talent coming outta her ears.  I’m very happy to have her as the first of my Fringe-terviews for 2013! 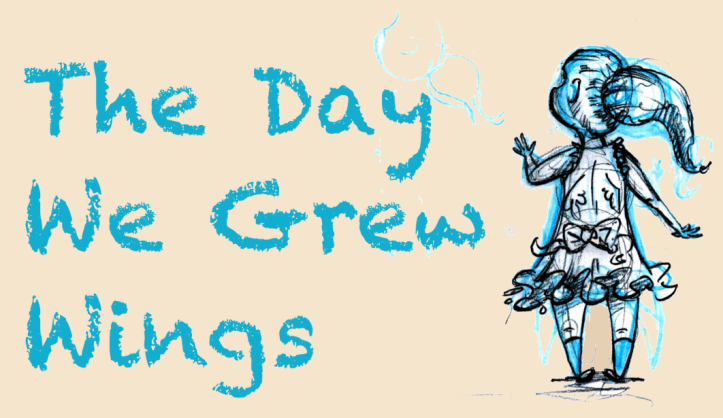 – What is the genesis of THE DAY WE GREW WINGS?

The Day We Grew Wings was born during a conversation between Stewart and I when he asked me what it was I wanted to do more than anything. I told him I wanted to fight a dragon.

–Tell us a little bit about your cast and crew.

Katherine Dermott is our sublime Stage Manager. She recently graduated from Algonquin, but it seems that may have been mere formality as this career is in her bones. She is organized, dedicated, and delightful.

Stewart Matthews is an actor/director/writer/musician from Wolverhampton in England. Stewart is a treat for an actor, because he knows exactly what he wants and how to ask for it. He brings this joy to the rehearsal room; we’re all there because we love it, push yourself, accept no less than your best and even then trust that you are capable of more.

Nick Surges is an Algonquin grad who auditioned for a part that didn’t exist yet. After seeing him, Stewart and I found a new character and story-line. He is so hard working and focused. It’s been lovely getting to know him in this show.

– How has your Ottawa Theatre School experience prepared you for this move into show creation?

OTS focuses on the individual as an artist, but I spent a lot of my time there very lost. Semesters or years are ended with solo primary creation pieces and we were coached to delve into as honest a piece as we could muster. I like to think that even though it took me an extra year that I have finally done that.

–Do you see yourself as more of a writer, or an actor?  Or something else?

‘Actors do it while people watch'< I need that shirt. I have a super involved imagination. It’s all-consuming so writing, creating, and performing come a close second to lying/dancing in a field fantasizing the day away.

– Did you, or DO you have an imaginary friend?

… Can other people see Stewart? I had more emotional connections to characters in books than anyone I imagined up for myself; Anne of Green Gables, Clarice Starling, Lara the Fairy Queen. I would dream of people and wake up heartbroken to find they didn’t exist. It drove my parents nuts.

– bonus question: how do you get any work done with Zach Counsil AND Stewart Matthews around?

One name : Katherine Dermott. Those boys are so funny and enchanting, what we needed was a Katherine. She is patient, kind, and allows us to indulge an appropriate amount of tom-foolery.

THE DAY WE GREW WINGS from Lonely Egg Productions is playing at this years Ottawa Fringe Festival at Academic Hall.  Showtimes are:

Advance tickets available HERE at the Fringe website. $10 at the door with a Fringe pin!