Wow, the blog has been sleepy these days.  And it’s certainly not from lack of theatre…in the last couple of weeks, I’ve seen the amazing WHITE RABBIT RED RABBIT by Nassim Soleimanpur three times (with actors Margo MacDonald, Kate Smith and Richard Gelinas), but I’d decided early on not to publicly review it, as it rather defies traditional review.  Not that my professional counterparts didn’t give it a go, but that’s just my personal call.  And if you missed it, you missed OUT.  Huge thanks to AL Connors and a Company of Fools for bringing this magical masterpiece to Ottawa.

But I gotta justify this paid domain name SOMEhow, so what else is there to talk about..?  Why, the newly announced 2013/2014 season at the Gladstone Theatre, natcherly!  The multifaceted gang that comprises the Gladstone collective have provided a pretty wide and varied mixed bag of shows for the new season, with 8 ‘main’ shows, and no fewer than 4 ‘extra’ shows, and it doesn’t stop there.  More theatre is good theatre, I always say, so let’s take a look at wat they’ve got in store from us!

PRIVATE LIVES by Noel Coward, September 20 to October 12.  From Plosive Productions and director Craig Walker.  Calling it ‘the second wittiest play in the English Language’ (after PEER GYNT, obviously), Plosive gets the new season underway with Boss Coward’s comedy of the manners.

SHERLOCK HOLMES AND THE CASE OF THE HANSOM CAB KILLER by Chris Bange, October 16-26.  From Black Sheep Theatre and director Dave Dawson.  A Fringe hit for Bange (last seen in Ottawa at 2012’s Fringe with THE FAT GUY SHOW), I’m very excited to catch this one.  And who doesn’t love Sherlock Holmes these days?

ETHAN CLAYMORE by Norm Foster, December 6-22.  From Same Day Theatre. Same Day returns after a great debut at the Gladstone with IN THE NEXT ROOM, with a slice of Foster for the Christmas Season.

AGE OF AROUSAL by Linda Griffiths, February 7-22.  From Bear and Company.  Sexiness 80’s style (1880’s, that is) from the prolific Linda Griffiths, as we go undercover at a school for secretaries.  Here’s hoping we don’t have an all-male cast for THIS one.

UNDERBELLY by Jayson McDonald, February 26-March 8.  From Black Sheep Theatre and director Jeff Culbert.  Jayson Mac’s stunning one-manner returns from last year’s Black Box Series, and if you were dumb enough to miss it then, here’s your chance to smarten up!  A pretty incredible theatrical achievement.

MY BRILLIANT DIVORCE by Geraldine Aron, April 25-Ma 16.  From SevenThirty Productions and director John P.Kelly.  Phew, I was starting to WONDER when John P was gonna show up on this list!  And a one-woman show to boot?  Be still my heart!

“ART” by Yasmina Reza, May 23-June 8.   From Same Day Theatre.  Rounding out the main season, Same Day is back with a little something from GOD OF CARNAGE authour Reza about the nature of art, friendship, and all that jazz.

THE WAR OF THE WORLDS by HG Wells, adapted by Orson Welles, October 30-November 2.  From Plosive Productions and director Teri Loretto-Valentik.  The radio play returns, but takes a sharp turn to HalloweenTown, which delights me to pieces.  The classic collision of Welles and Wells gets brought to the stage and I canna wait.

HAL AND FALSTAFF by William Shakespeare, adapted by Margo MacDonald, September 3-7. From A Company of Fools and director Margo MacDonald.  The follow up to the Fools’ Torchlight Shakespeare Summer show, this mashup of all the best Henry and Falstaff bits by Margo Mac comes indoors for what is sure to be an unmissable run. 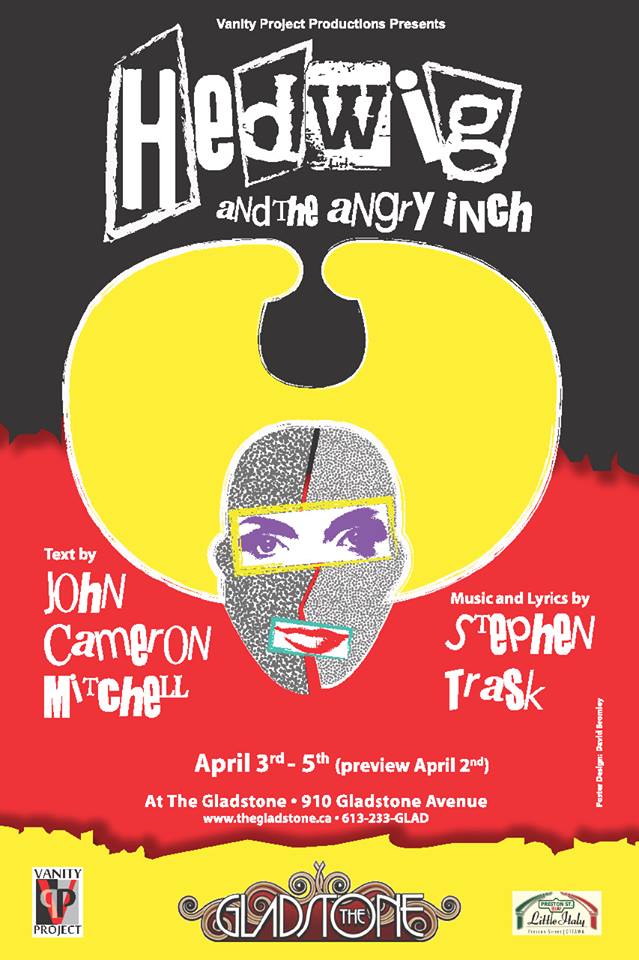 HEDWIG AND THE ANGRY INCH by John Cameron Mitchell and Stephen Trask, April 3-5.  From Vanity Project Productions.  An amazing underground musical sensation comes to the Gladstone, courtesy of the increasingly multitalented Smooth Tim Oberholzer.  Ottawa, I want to see you PACK THESE HOUSES.

MUCH ADO ABOUT FECKIN’ PIRATES! By Richard Gelinas and Margo MacDonald, March 13-29.  From Parry Riposte Productions.  Gelinas and Margo as wacky pirates, with AL Connors thrown in the mix?  There is no lose here.

And did you still want more?  Because the Phoenix Players are back again with a pair for their new season, including Shiri Hendryx’ THE LAST OF JANE AUSTEN (November 7-16) and THE DIARY OF ANNE FRANK by F.Goodrich and A.Hackett (April 10-18).  Comedy and Tragedy, both masks get covered. So take your pick or catch’em both!

A pretty exhaustive and impressive lineup…tho I’ll admit it’s a lot of the ‘extra’ programming that excites me the most.  Mind you, DETROIT sounds ultracool, and I’m always thrilled to see Jayson McDonald and Chris Bange back (but will people pay full Gladstone prices for a Fringe show, awesome as they are..?).  Nevertheless, I’ll be there for every damn show you’d better believe, and am once again glad to see the Gladstone thriving and surviving (and more collective than ever)!  Catch you next season, gang, it should be a sweet ride.  Peace, love and soul,

PS Don’t forget the Gladstone’s ONE NIGHT ONLY SERIES, going on every Thursday, Friday and Saturday night between June 20 and August 24!  Full show listing now available HERE! Make sure not to miss my man Jonah Allingham and SUMMER OF ‘34, plus so much more goodness that deserves another post all on it’s own!  Hmmmm…