I’ll say it…THE LARAMIE PROJECT is a hard show to review.  Not that I wasn’t looking forward to seeing it again, after having my first experience with this amazing play last year at the Saw Gallery, courtesy of Red.Collective.  And this time, it was the cool kids at Algonquin College Theatre who would be putting it on, as the third and final full production in their season, and with the help of Teri Loretto-Valentik in the Director’s chaise.

But LARAMIE is a gutpunch no matter how you slice it, and giving it a critical review (not that that’s my forte or anything) feels a little…crass?  It’s hard to describe.  Created by the members of the Tectonic Theatre Company outta New York via interviews with the townspeople of Laramie, Wyoming following the hate-fuelled kidnapping and murder of gay teen Matthew Shepard in 1998, the play puts the paradox of a brutal small town murder in full display.  ‘We don’t raise our kids like this,’one vehement citizen demands, only to think about it a second later and admit that, ultimately, it turns out that yes…yes they do.  But of course, that’s too simple, too, and the shades of grey in this deceptively simple theatrical project are as many as there are characters. 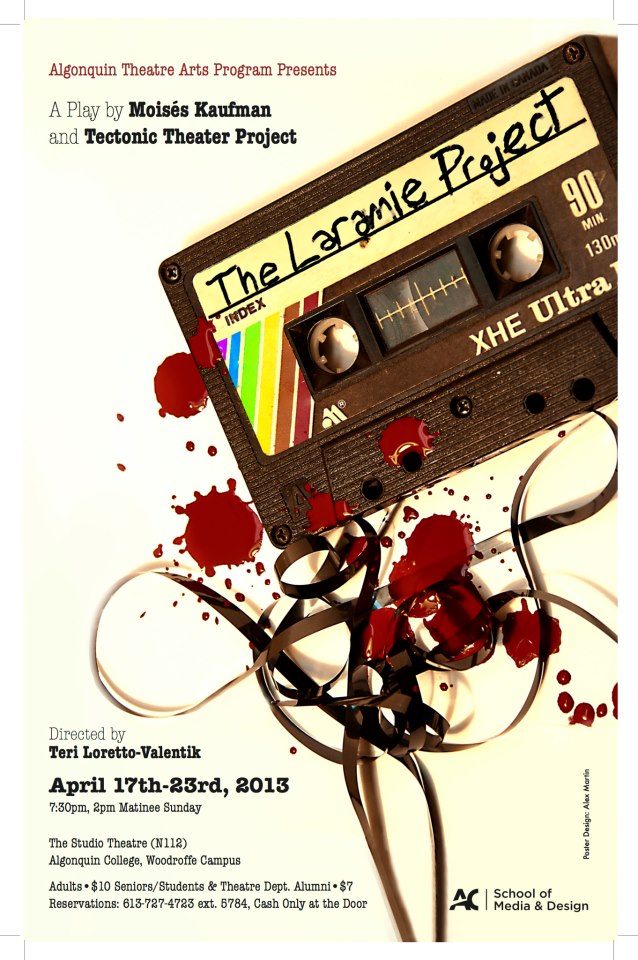 The cast for the show, almost all portraying multiple characters along the way, are Elizabeth Chant, Annie Clarke, Shannon Collins, Katherine Dermott, Bruno Khoueiry-Jaber, Curtis Kupkee, Kiersten MacDonald, Sam McCarthy, Sarah Patrick and Nick Surges, with somber narration provided throughout by Sean Mason.  I’d hesitate to call any performance a ‘standout’, as this is as textbook a case of an all-or-nothing ensemble you could try and find.  If anyone fell flat, it could have brought the whole affair crashing down…happily, none did, and as far as I’m concerned, all of them did goddamn great in an emotional and pretty wordy script.  Merry props to Laramie veteran Nick Surges, who was in the production that I saw last year, and is rapidly becoming Ottawa’s go-to dude for this play.  It was also nice seeing ubiquitous stage manager Katherine Dermott on stage for once, and doing a great job of it (my fav’rit was the boy on the bicycle).  Curtis Kupkee got to shine in a key late-play scene as Shephard’s Father, and Sam McCarthy had good fun as the play’s most memorable character (for me), ‘Doc’  the limo driver.  As I said, everyone was very good (honest…I’d drop more names but, well, there are an awful lot of you this time around! 🙂 ), and more importantly they worked smoothly as a unit to tell this important, horrible, disarmingly funny, and oddly beautiful story.  This LARAMIE works and works well, aided by some simple but splendid video projection designed by Andrew Alexander.

That’s it for me…the next time I see this play I think I’ll just be the audience, letting the show work its magic over me.  Or maybe not…Shepard’s story deserves to be written about, even now, and it sure as Hell needs to be told, and seen.  So go see it, while you still can until this Sunday at Algonquin College (studio Theatre building N…give yourself some time, the place is a bit of a maze).  Peace, love and soul,