A Fest of Us

Is there a better way to spend a cold, slushy evening than in the company of friends, enjoying some live theatre and drinking between each show?  I’M THINKING NOT.  And luckily for you, Ottawa, the Red.Collective crew share my thinking, and decided to make it happen.  After a couple of sadly cancelled shows over the last few months, the Reddies have returned to cheer up the holidays with some rapid-fire, cool beans theatre under the banner of RED FESTIVUS, deep in the cozy nook that is the Saw Gallery.  They’ve lined up 4 shows (only 3 a night, and if you weren’t there last night you already missed one of them!) with a might kick, in what I definitely hope becomes a new holiday tradition.  The Radio Play can’t have ALL the fun, right? 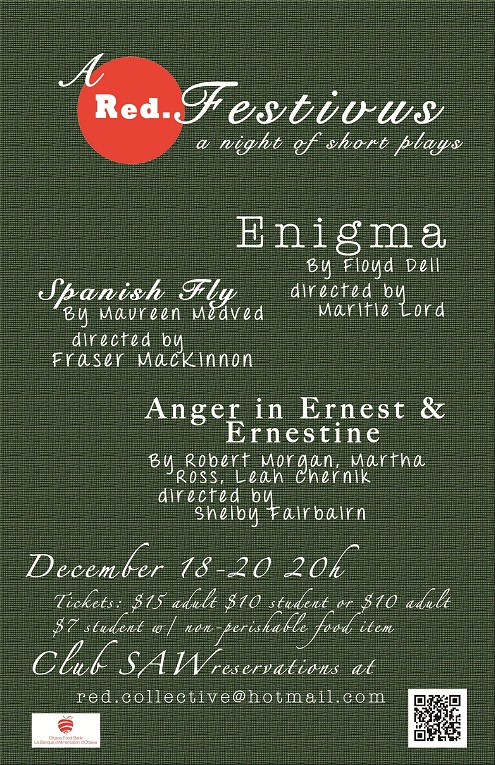 After a stop off at the bar, and some welcome palaver with lovely Team Visitorium alumnus Danielle Savoie (who totally needs to write some more reviews for this site in the new year, I’m just saying), the festivus kicked off with Floyd Dell’s ENIGMA, directed by Maritie Lord and starring Dan DeMarbre and Allison Harris.  The show features Dan and Allison as Paul and Helen, a couple breaking up before our eyes, and all the emotional suckerpunch stops are being pulled about for thee occasion.  It’s a gutwrencher, and DeMarbre and Harris deliver the goods.  I won’t go into much detail, as it’s a pretty short piece.  But there was more to come!
A quick trip after that show to an adjoining space (passing the bar on the way…the Reddies planned this well), where the players were already set up for show number two, SPANISH FLY by Maureen Medved, and directed by Fraser MacKinnon.  Featuring Dave Rowan and Mekdes Teshome as another couple on the verge of a particularly harrowing breakup , even as they’re locked inside together five stories up in a somewhat hardcore attempt to quit smoking.  Threats, emotional torment and knife-fights ensue in a pretty sweet little show that mixes sexy, funny and hysterical into a fun package.  Dave and Mek do good work, and Fraser’s job at the helm has me anticipating his full-length debut next month with REASONS TO BE PRETTY even more than I was before.  And that was kind of a lot.

My last show of the Festivus was one I’d caught before, from the good lads at May Can Theatre, doing a little emergency subbing-in work for the evening.  I’m not sure exactly why the third scheduled show, THE ANGER IN EARNEST AND ERNESTINE from director Shelby Fairbarn, couldn’t make it that evening, but it promises to return on nights 2 and 3.  In its place this time was Cory Thibert’s THE ROOM OUTSIDE THE ROOM, a one-manner starring Tony Adams as Thomas Tills, a slightly off-kilter young man waiting for an audition call, and with a few things to get off his chest.  Tony’s Thomas is an endearing weirdo, who illustrates his abusive upbringing in a bittersweet but hilarious series of acted vignettes.  Tony is really, really good in this show, especially as Thomas’ aggressive, dimwitted Father (and in a wonderful bit where he takes us through his process of getting into a character called ‘the Birdman’).  A great end to thee evening I must say.

But it wasn’t over!  The Reddies kept the bar open a little longer, Dave Rowan played us some songs, followed by Caitlin McNamee and the May Can boys, and we all just hung out and enjoyed the groove til it was time to cal it a day.  A great night out for any self-respecting Ottawa theatre buff, and for goddamned well sure the sort of DIY action we should be supporting the Hell out of.  Get on down to the SAW, have a few drinks, and see what the new kids are up to. You’ll be pleasantly surprised.  Peace, love and soul,