The Song of Sister Agnes

It was a race to the theatre yester-night, let me tell you.  This working-blogging-theatre schedule I seem to have developed occasionally leaves timetables a wee bit tight, you know what I mean?  At least I managed room for a bite to eat in there…that’s kind of a new thing I’m working on lately…Eating.  We’ll see how it goes, it’s likely just a phase.

In the meantime, my theatre phase continues unabated with my third trip to the Oiving Greenboig Theatre Centre in four days (I think they’re getting pretty sick of me, to be truthful).  This time it was NOT to see FLY ME TO THE MOON, although that would have been a perfectly acceptable use of my time.  No, it was up, up to the lovely Studio space tonight, for 9th Hour Theatre‘s production of John Pielmeier’s AGNES OF GOD.  The 9th Hour gang specialize in shows with a religion or faith-based theme, which I freely admit sometimes gives my dully agnostic brain some aches and pains, but usually in a good way.  This is my third 9th Hour show this year (after CRIME AND PUNISHMENT and MY NAME IS ASHER LEV…I sadly missed THE SECRET GARDEN, sorry gang!) and I’ve dug what I’ve seen so far.  So as I took my seat for this latest show, alongside the always delightful Joel and Lawrence (who I’m bumping into at every second show these days, huzzah!), I was expecting good things. 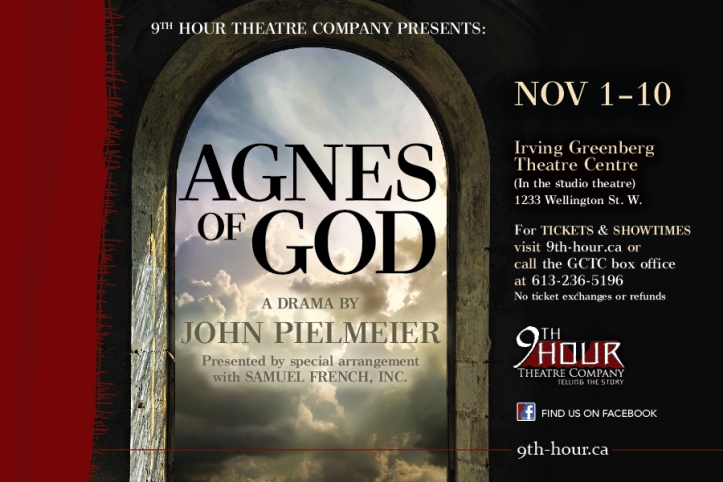 The show takes the form of a sort of metaphysical murder mystery, centering around sheltered, mysterious sister Agnes (Gabrielle Lazarovitz).  A baby, apparently Agnes’, has been found strangled and abandoned.  The Mother Superior (Janet Rice) tries to protect Agnes, but the courts have assigned chain-smoking psychiatrist Doctor Martha Livingstone (Anna Lewis) to assess young Agnes’ mental state.  What follows is a battle of wills, wits and ways of life as the doggedly atheistic Livingstone clashes with the strong-willed Mother Miriam, with Agnes’ fate hanging in the balance.  Anna Lewis is quite strong as the determined Doctor, delving headlong into Agnes’ troubles with what even she doesn’t realize is reckless abandon.  She certainly has her work cut out for her in many enjoyable scenes duelling with Rice, who fits the proud Mother Miriam like a glove, projecting barely-restrained ferocity in her defence of her young charge (and, at times, her faith).  And Gabbie Lazarovitz is god-damn mesmerizing as the seemingly simple Agnes, childlike but carrying dark burdens beneath the surface.

The entire show is set to live music, and not just the gorgeous vocals provided by Gabbie Laz’ Agnes throughout (themselves worth the price of admission).  Cellist Martain Pearson plays beautiful music along the way, from local composer Steven Lafond.  They add a wonderful element to the show, and director Marc-Andre Charron was wise to include them.  In that small studio space, Anna Lewis’ omnipresent herbal cigarette DOES get a trifle overpowering at times, so practice your shallow breathing if you need to.  And it could be argued that there’s a little too much wandering up and down the stage with chairs in hand at times (it feels like filler at least once), but that’s a fairly minor concern.

The play itself is a pretty satisfying one, even it provides little in the way of easy answers to its questions of the battle between faith and reason in our cynical modern times.  As Mother Miriam sagely notes, she believes in the miracles of old as firmly as she would doubt them if they happened today.  This is a very good show from some very talented folks, and I say y’all should check it out while you can…and you can until the 10th, so get going!  Peace, love and soul,