DANIELLE SAVOIE is one of my fav’rit up’n’coming actors here in Ottawa, and has been ever since I saw her in Salamander Shakespeare’s THE DEATH OF TYBALT at the 2010 Ottawa Fringe Festival.  Since then I’ve seen her in ROMEO AND JULIET, RED NOSES, QUEEN FOR A DAY, 297 BAYVIEW CLINIC (it counts!), LA CIMITIERE DES VOITURES and A MIDWINTERS DREAM TALE, among others.   Latest projects are Bear and Company‘s ‘TIS PITY SHE’S A WHORE (at this year’s Fringe) and AS YOU LIKE IT (touring parks later this summer).  She does not care for writing her own bios.

LITTLE ORANGE MAN doesn’t star a little orange man at all, but Ingrid Hansen, who plays a 6th grader named Kitt. Kitt is an awkward, ADD-suffering, extremely imaginative young Danish girl who has a lovely singing voice. She went on the internet and created a craigslist ad which the audience apparently responded to. Why did she need all of these people? To help her with her dream experiments of course! Basically, Kitt had been having a recurring dream in which she needs someone to help her cross the invisible bridge to the other side of her dream. Throughout the play she tells the audience about her dreams, about being picked on at school and about her friendship with “kinders” (kids attending a preschool) on the other side of the fence, about living with her mom and her grandfather, and finally about fucked up stories involving shoes. Throughout, there are puppets and food and scissors and shoes flying about! 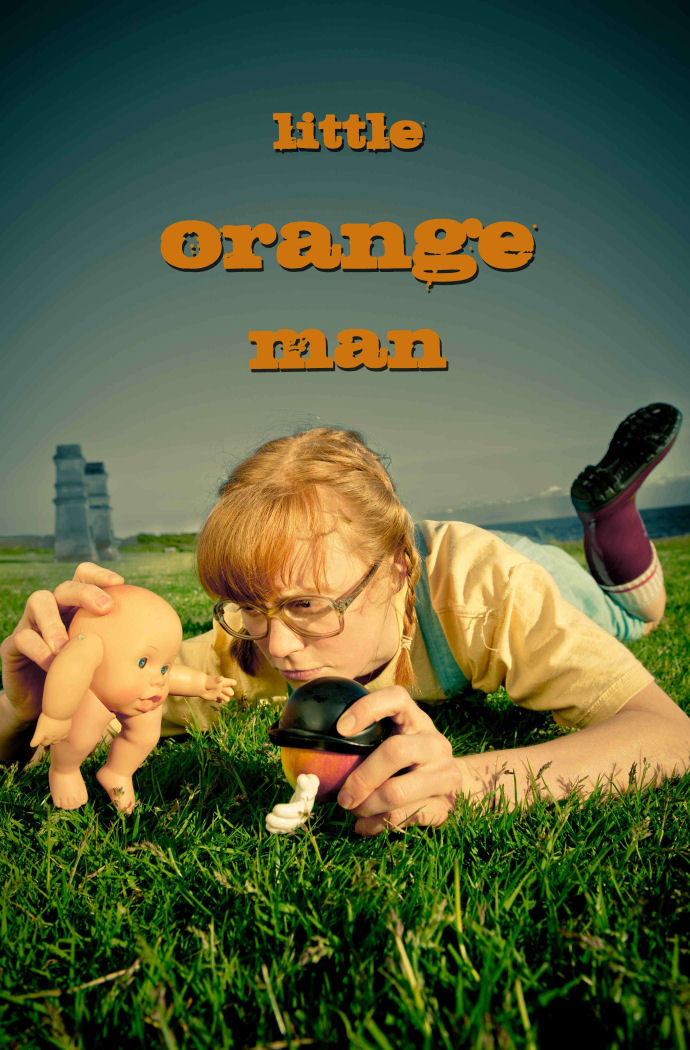 Honestly, it is a must see show. Yet another one hander (I feel like all I’ve seen this year are one man (or woman) shows), it doesn’t feel like it is a one hander with all of the characters she portrays with her puppets and lettuce and apples and celery. It is 75 minutes of dynamic storytelling, song singing, and audience interaction. And as one might guess from the fact that Kitt has ADD, it is really all over the place, and it also reminds you of the massive imagination children can have. It made me jealous of kids who could still think up of all the crazy shit she was talking about. What stuck the most in my head were the drawings the kinders drew that were inspired by Kit’s stories. I don’t want to say what they were but it is fucked up. But awesome. The whole thing is awesome.

Ingrid paints such vivid pictures while using the most mundane items. She has impeccable timing, and is extremely precise with her puppetry (both with the puppets and the food items). It is obvious this show has been worked and reworked and specified right down to the finest detail. Shows like LITTLE ORANGE MAN are why fringe festivals were created.

This review is kind of turning ADD. I think Kitt rubbed off on me. Which just goes to show how fucking amazing this show is! I decided to sit on the floor rather than on a seat. It was uncomfortable and painful, but worth it; I was just captivated the whole time. If you want to catch this show, go early, it has been selling out quickly. Luckily, it is in a BYOV, so there are lots more opportunities to see it. Do it! Go see it! Or else birds will peck out your eyes!

– SPACE MYSTERY… FROM OUTERSPACE!!! by Jeremy Doiron (Dead Unicorn Ink.)
A femme fatale, a mad scientist, a film noir detective, giant aubergines, giant lizards, giant… well giant everything, lasers, and outer space. If you’ve every dreamed of all these things rolled up into one package, SPACE MYSTERY… FROM OUTER SPACE!!! (I think that is the number of exclamation marks…) is for you!! Dead Unicorn Ink brings us yet another hilarious show parodying B movies with the use of puppets!
Detective Rick Derringer (Jake Smith) is commissioned by Selma Widowmaker (Marissa Caldwell) to solve the mystery of the disappearance of her mad scientist Uncle, Dr. Phineas Grimm (Tom Charlebois). What ensues is, of course, a trip to Grimm’s secret lair in outer space. Derringer and Selma hop onto Captain Kit Hammerfist’s (Mike Doiron) dirigible and crash land on Dr. Grimm’s mysterious planet, where everything starts to go wrong. I don’t want to give away too much of the plot since most of the fun is going in blind, but just know that there are lots and lots of amazing puppets. 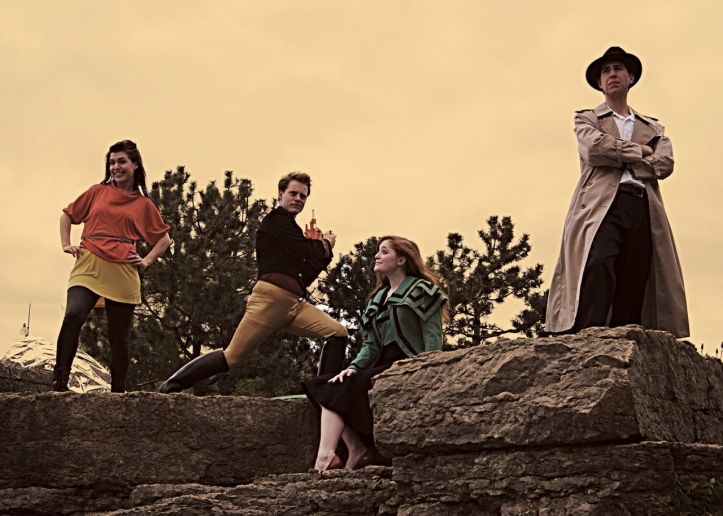 All of the performances were spot on, mostly because the parts were expertly casted. Mike Doiron is wonderfully pretentious and condescending as a useless captain, Tom Charlebois is completely over the top mad scientist-y, Jake Smith has the film noir tone and voice nailed down, and I swear I heard jaws hitting the floor when Marissa Caldwell walked out and played a femme fatale as if she was one already!
The script is filled with double entendres, puns, and hilarious jokes, all the while still advancing the plot. There are some bits here and there that didn’t really work and the energy dips a bit, but you completely forget about those parts when the next hilarious thing happens. The script is tight and there is no fluff or filler, it’s all plot plot funny funny plot plot. The only real criticism that I have is detective Rick Derringer’s stupid hat. It is a cool character piece, but I couldn’t see half his face for most of the show since the lighting hit it at a weird angle. The hat isn’t worth it if I can’t see an actor’s face.
Space Mystery is definitely a must see fringe show. You won’t feel intellectually stimulated, but you will laugh a hell of a lot. Fuck smarts.
Exclamation marks!!!!

– DONKEY DERBY by Tess Mc Manus (Little Green Hat Productions, w/Black Sheep Theatre)
DONKEY DERBY is a cute little piece written and performed by one of the most Irish Canadian I know, Tess McManus. She plays a young catholic Irish girl by the name of Mary who was entered into Letterkenney’s Donkey Derby by her family. For anyone who doesn’t know (I didn’t know either, so no worries) a Donkey Derby is a competition in which unwilling participants must race unwilling donkeys to win the golden turnip. For a character like Mary, who is anti-social and suffers from severe anxiety disorders, being entered in such a humiliating competition is pretty much death by embarrassment. 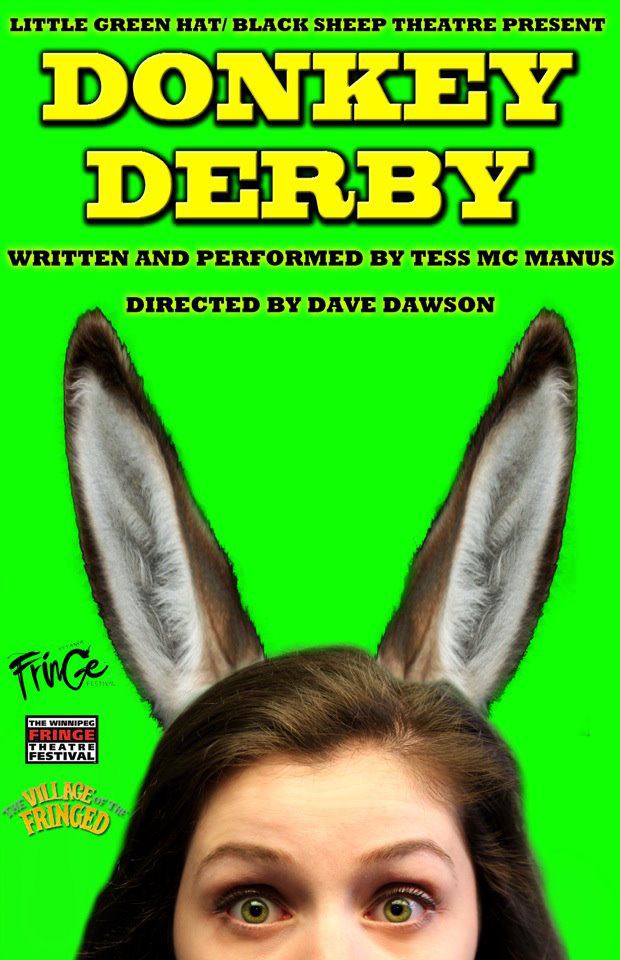 This one woman show doesn’t stop at just recounting the events of that donkey derby day, however. Mary tells her good “friend” Percy all about her childhood and her time at an all girl’s high school. She beautifully talks about the tension between catholic and protestant Ireland in a very accessible way to Canadians, such as myself, who simply do not understand the difficult Irish situation. After this brief serious piece, she jumps right back into recounting her hilarious life in Letterkenney.
Truth be told, I am always sceptical walking into a one person show. They are difficult to pull off, and if it doesn’t work, there is only one person that can be blamed. However, Mc Manus pulls it off. She is hilarious as Mary and is able to paint quite a vivid picture using only her words and a single chair. She also puts on an Irish accent which is AWESOME because accents are awesome. If only for the accent, come see the show. But you will be treated to way more than that once you arrive.

– A REPORT TO AN ACADEMY by Fanz Kafka (Glassiano Productions)
A REPORT TO AN ACADEMY, written by Franz Kafka, is yet another one person show featuring Sean Sonier as a chimp. Yep. He plays a chimp. In a one man show. And he talks! Whaaaaaa?
Glassiano Productions remounts this piece at the fringe festival. It was directed by Martin Glassford. Originally, it was mounted and performed at the University of Ottawa last year, but it was so good, it just had to be performed again! (I’m guessing). 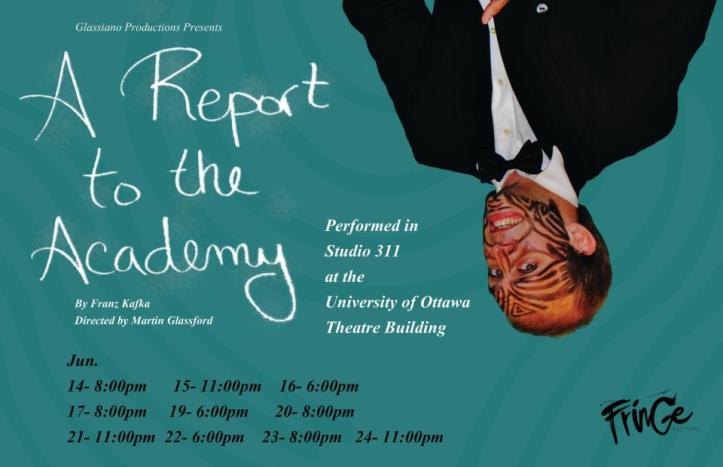 Sean Sonier plays a chimp who decided to leave behind his life as a chimp and pursue a life as a human being. As the title of the show suggests, he recounts his life and transition from ape to ‘human’ to an academy, ie., the audience. He talks about being caged and transported against his will, about his first hand shake, his first word; essentially, his whole transition from ape to human.
The script is moving yet funny. You can’t help but feel sympathetic for a character who can no longer live as an ape, but still is not fully comfortable as a human. It’s easy to interpret that in different ways that is relatable, because really, apes don’t actually turn into humans. Obviously. Anyway!
Sean Sonier is fabulous as the ape. He somehow is able to play a very eloquent and intelligent ‘person’ while keeping the physicality and behaviour of a chimp. It’s a bit of a mind fuck, but it’s a good mind fuck. His use of the only set piece, a podium, is also really cool. I won’t give away what he does with it, but it turns into a lot of things other than just a plain podium.
Overall, a funny and touching show. I know people might not be too crazy about walking up all those flights of stairs to see the show in room 311 of the theatre building, but trust me, it is well worth the climb! (Plus a bit of exercise after all that sitting around watching fringe plays can’t hurt anyone).