I’m not sure where to begin.   I suppose I should backtrack a bit, and mention the awesome night out yesterday I had with Third Wall Theatre and their EMPTY SPACE FINALE reading/fundraiser, featuring an evening of short stories from the wit of Oscar Wilde at the Cube Gallery.  Great storytelling from James Richardson, Katie Bunting and Henrietta Southam, the promise of exciting new announcements to come from this, one of Ottawa’s most sorely missed theatre groups, plus a cool silent auction that ended with me waltzing away in Andy Massingham’s robe and crown from last year’s EXIT THE KING.

A hard night to top, I assure you.  But God Damn…I can’t even think of a cute or funny intro to this one, so I’m just gonna say tonight was the premiere of SUBDEVISION, the new most amazing thing in Ottawa this side of Fringe.  Taking place in St.Paul’s Eastern United Church on Cumberland at Daly, eight local theatre companies decided to get together and subvert the norm, crafting eight new pieces (between 8 and 20 minutes long) specific to different rooms in the building, and performing them several times a night.  For twenty dollars, you can see one, or all of the shows, depending on your inclination (and in some cases, luck).   Playing only from the 10th to the 12th, and featuring some of the most innovative, exciting, and achingly fucking beautiful live theatre you could hope for, SubDevision is a paradigm shift in local cool.  My soul feels about ten times normal size after experiencing this joy of a night, and if I sound like I’m gushing, I’m not.  I’m just telling it like it is.

When I started off my SDV evening (after greeting wayward Ottawa gal Jessica Ruano, who winged her way home from Europe to see this show, and possibly for other reasons 🙂 ), I was a little bit lost, as were we all.  Even though I knew the concept of the show, how to proceed once inside was a different matter, but it was one that soon sorted itself out.  In the basement of the church, where you arrive upon entering, are 8 different stations, each manned by a ‘tour guide’ for the company they represent.  You sign up with them for a show, check it out, then come on back and check out something else.  Only a minimal amount of planning is needed to catch most, if not all of the shows in a night.  A few pro tips WILL be revealed over the course of this post, however, so pay attention.

My first show of the night was FIRST DUSK, LAST LIGHT in the Sanctuary, from Deluxe Hot Sauce (PRO TIP #1: This show only plays during the dying daylight hours, until 8:30 or so, so if you want to see it, see it early!), and featuring the stunning trio of Alix Sideris, Doreen Taylor-Claxton and Kelly Rigole.  Gorgeous women making gorgeous music, evoking the cycle of life, dancing AND playing the harp…a wunnerful start to the evening.  And a powerful piece of nonverbal theatre, to boot.

From there, I was hustled by helpful helper Jenna Ellen, who escorted my group toward the front steps of the building (PRO TIP #2: this show is outside…bring your coat!), there Cory Thibert and Tony Adams, the lovable scamps of May Can Theatre, were ready to deliver their new piece, DECIDING WHAT IS.  Starting off with some playful banter, and quickly segueing into some spiffy physical work, Cory and Tony brought everyone laughing into the world of two boys whose imaginations were getting the better of them…and the important decisions they still had to make.  Silly, sneaky and affecting, and with that underlying heart and honesty that, for me, has marked all of the May Can shows to date.  Another winner.

Back inside, and time to head into the kitchen for some partying!  Only this party was with Two Little Birds, and their show CONVERSATIONS WITH STRANGERS promised a little something extra.  Featuring Kiersten Hanly, Sara Duplancic, Sarah Conn and Patrick O’Neil, I can’t give too much away about the secrets revealed during this unique party, but it gets pretty intimate, interactive, and invigorating to boot.  Magical new identities are assigned, and permission is given to not only be someone else, but to make the decisions the world often tells us we can’t make.  Thought-provoking to say the least.  And the clock is ticking.  Exciting stuff…possibly involving treats.

I was then booked for one of my most anticipated shows of the evening, from maybe Ottawa’s most beloved troupe..Mi Casa Theatre and their astonishing new piece, HIDE (PRO TIP #3: Book your spot quick as a bunny for this show, as it only receives ONE audience member at a time!).  With a little help from doorman The Brad MacNeil, Nick DiGaetano and Emily Pearlman (with a last-minute assist from the lovely Tess McManus) guide you on an unforgettable journey into the mind of…well, that would be telling.  But I’m still on cloud nine from my experience in that tiny space…I was shaking more than a little when I got out.  Haunting, primal, INTENSE.  How are there not lineups out the door for this event??

No time to lose after that one…it was off the the Front Room for what, to many, will be THE experience of the night…the Ottawa Stilt Union and KLEO’S WAKE.  A troupe in mourning over the loss of one of their own invites you in to honour that memory, and witness some breathtaking spectacle in spectacularly cramped quarters.  Performers loom more than ten feet overhead (or so it seemed from my perspective), accordions blare in the small space, toasts are made, several curious languages are spoken…and bloody Hell, magic is made.  I sadly don’t have all the Stilters’ names on me right now, but I know Guy Marsan was amazing, as was Elise Gauthier, who kept on breakin’ my heart as a grief-stricken acrobat, unable to process the loss.  An utter miracle to witness in a setting like this. 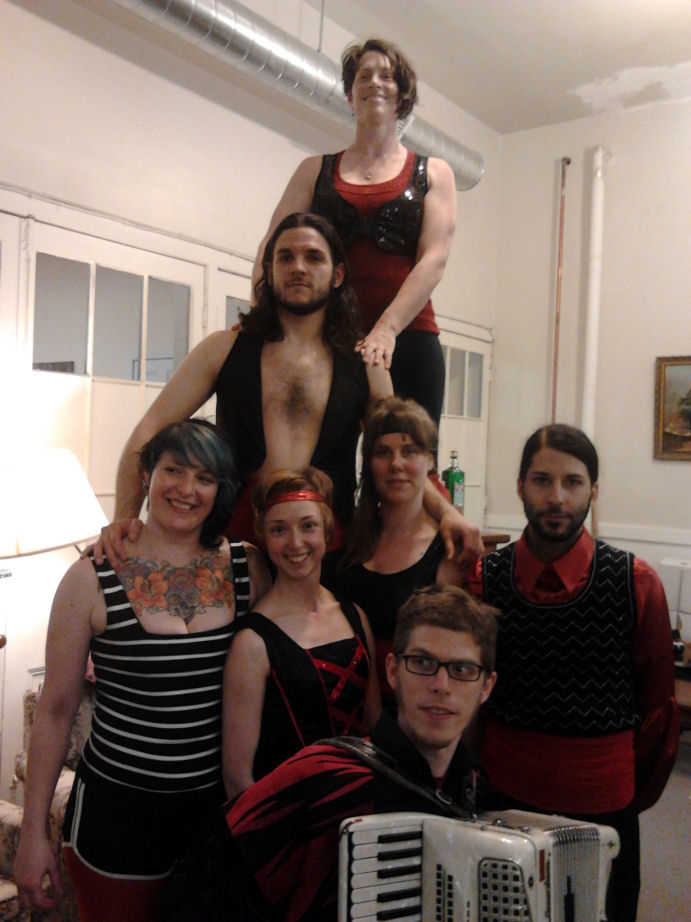 A quick dart across the hall and it was time for another eagerly anticipated show, this time with a whopping TWO audience members per show (PRO TIP #4: book early for this one as well, for obvious reasons)…Gruppo Rubato’s LA FIN DE FINS, starring Tania Levy, in the elevator.  You may need to brush up on your joke skills for this one, a study in the power of light and laughter that is SUCH joy, SUCH wonder, that at this point in the night I was starting to feel like I was dreaming the whole thing.  Her simple character is one of the most instantly likeable I’ve encountered on any stage, and her story, once it is told, is beautiful and moving.  Tania entrances throughout this witty and wise show, written by herself and Pat Gauthier.  A perfect little gem.

Back again to the Sanctuary then, as Deluxe Hot Sauce had vacated and made way for Skeleton Key and their decidedly darker play, SHE HATH DONE WHAT SHE COULD, starring Kate Smith, Katie Bunting and Karen Balcome (PRO TIP #5: When being led up the stairs to this show, make sure you have a  good view of the door before you go in…trust me.)  Done almost entirely in the dark, using only lanterns and the faint city light seeping in through stained glass, this  tale of an exorcism gone pear-shaped gave me a good case of the creeps, as well as almost setting me to tears from being so bloody beautiful.  Amazing use of light and sound and movement, and the always fantastic Kate and Katie on the job, make this a stunning endeavour that should not be missed.  Kind of like everything on this night…seeing a pattern?

My final show (boo!) of the night was from the Counterpoint Players, a one-woman show from starring Bronwyn Steinberg called OCCUPY ME.  Set in an Antechamber betwixt the Sanctuary and front steps, Bronwyn leads her small audiences through a yoga training session, even as her character of Sarah Lotus Blossom questions her own resolve in the ongoing fight against globalization, corruption and tyranny.  Using the stances and language of Yoga, the play uncovers the indecision one woman has regarding her privileges and responsibilities, and her question of where she should really go from here.  The audience does some  following along of their own, but don’t all expect to be able to keep up with Bronwyn, because that girl…? Flexible.  All I’m gonna say.

The night ended too soon.  I wanted to see shows again, already.  Most of the gang headed over to an afterparty at a nearby hotel (the event, by the by, is no longer licensed as reported on the posters, but you won’t miss the booze, I promise), and while I stepped in for a moment, I was soon off for home…because I had to write all of this.  My heart was aching to bleed its feelings onto the keyboard.  I’m madly in love with SubDevision, if you hadn’t guessed.  I adore it.  I don’t want it to become an Annual event in Ottawa…I NEED it to.   We ALL need it to.  If it doesn’t happen again next year, then I hope the Mayans were right, because there’s no point in going on.  Whatever you’re doing the next two nights, make SUBDEVISION one of them.  Thank you to show producers Kevin Waghorn and Catriona Leger, and any others I should be thanking right now but aren’t…you’ve done this wee city a world of good, and we owe you one.   I won’t forget a minute of this night anytime soon.

Fuck me, but that was awesome.  Peace, love and soul,