Just a quickie tonight, as I’m feeling a bit under the weather the last day or so, and want to try and kill this with some Irish home remedy afore hitting La Nouvelle Scene tomorrow evening.  This night, however, was all about the Algonquin.  The graduating class, that is, of Algonquin Theatre Arts for 2012, who (after a solid season of ACTOR’S NIGHTMARE, ‘DENTITY CRISIS, THEATRE OF THE FILM NOIR and SHAKESPEARE’S INTERACTIVE CIRCUS) were all set to give their final monologues in one big go-round known as FLYING SOLO.  I’d meant to see the one last year, but ironically (or is it..?) I had school that night.  No such problem this year, and when the mighty Teri-Loretto Valentik invites you to see her students strut their stuff, one does not say no. I even had the nice surprise of being joined by the Adorkable ™ Nadine Thornhill, there to see her former Insight Theatre student Aidan Reed make good. 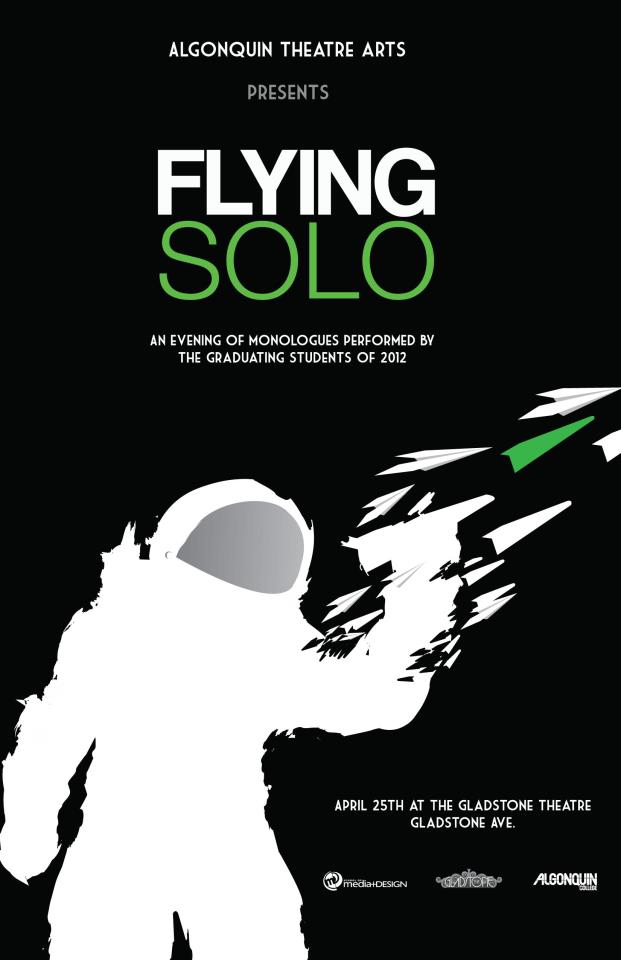 All 16 of the students took to the stage (borrowed from the upcoming DEATH AND THE MAIDEN production from ‘Plosive), in a bit of choreography designed by prof Loretto, but the rest…costume, monologue…was all left to the kids’ own devices.    And right off, I gotta say I LOVED the costumes, ranging from stylish suits and punk-chic to full-on drag-glam and bloody rags.  In fact, before long I was realizing that an evening of multiple monologues like this is actually a fucking fantastic idea, a thought that would prove correct as the all-too short recitals got underway.  The pieces varied in length and period (Shakespeare was well-represented, and two pieces by Kurt Weill which surprised me nicely), but flowed well one from the other.  And the whole gang did bang-up jobs, getting off to a quick start with Peterh Catalfamo’s spirited bit of TWELFTH NIGHT and finishing with Michelle Stewart’s haunting excerpt from OTHELLO.  I won’t go into each and every one, but a few things that stuck in my mind:

– Bubba Vien did a goddam smashing job on his monologue from POOR JOHN, stripping himself bare (and not completely figuratively, folks).  And the evening’s drag queen Samuel Morgan seemed to have a ball with his piece from ST.SEBASTIAN (certainly, the theatre jokes in his monologue went over well with the crowd).

– The duelling Weill pieces were awesome, from Sam Kellerman and Earl Carriere respectively.  Carriere had the dance moves, but Kellerman gets the costume vote.  A close call.

– Aidan Reed did indeed rock in a short but bang-on bit of Malvolio from TWELFTH NIGHT.  Reminded me of a wee Greg Kramer.  I look forward to his next move.

– The ladies were well-represented, and each one impressed.  Ali Caudle’s dramatic THE HOLIDAY excerpt nicely balanced Robin Thomas’ great comic turn from LES BELLES SOEURS.  Maggie Matian SO rocked with BONJOUR LA BONJOUR from Tremblay, and Elizabeth Franklin..?  I WANT to see that production of HAMLET.  And Nadine Thornhill, who was sitting next to me and absolutely HATES Shakespeare, agrees with me.  Nailed it, girl.

– The Boys represented with some blood’n’guts, including two bits of TITUS ANDRONICUS (from Mark MacDonald and Aaron Lajeunesse) and a little dash of MARAT/SADE from Dillon Rogers.  I actually caught Nadine visibly squirming to that last one, nicely done. 🙂

– Okay, I guess I AM going into each and every one, screw it. Who haven’t I mentioned?  Natasha Montgomery, giving a heartfelt bit of A CHORUS LINE, and Austin Fogarty being right commanding as Gremio from TAMING OF THE SHREW (and I bloody LOVED the cane).  Seriously, was anyone taking pictures tonight?  I’d love to see some pix of the gang in full dress.

Anyways, that’s it from me, and I can’t wait to see what this gang goes on to do next…I’m fairly certain it’ll be awesome.  Friend me on Facebook, you lot, I wanna keep up with what’s going on! You’re the goods, and no fooling.  Peace, love and soul,

PS: as graduation presents, you now all have your very own WordPress ‘tags’.  Feel free to make me use them as much as possible.