As I write this, it’s the day after, and it’s all over.  Fringe is over.  Life is back to the tedious, awful grind of killing eleven and a half months until the NEXT Fringe, a miserable drudgery of loneliness and misery that you probably really, really deserve because you’re just terrible, and now you have SO MUCH TIME to think about that.  Think HARD.  DO it.

But before all that, I’ve still got some Fringe to get to!  Let’s away, shall we?

A grand thing happened on the final day of Fringe this year…first, the weather was fuckin’ gorgeous at last.  SECOND, my brunch shift was deader than the public funding to the Summerworks festival (please donate, and feel free to egg the home of the next shithead neocon MP you can track down), so I split out extra early and caught a show I’d thought I had missed for good…MY MOTHER’S DAUGHTER by Stephanie Haines.   MMD tells the story of four women…or maybe four aspects of the same woman.  I wasn’t entirely sure either way, and didn’t care to be.  The ladies were all lovely, talented and rivetting onstage: Alexa Higgins as young, lovestruck Vanessa; Heather Archibald as anorexic Dee, building forts to hide in; Kiersten Hanly as fiery Adele, drowning her pain; and Celine Filion vamping it up as vain Katherine.  Linking their disparate stories is Jane Morris as a sort-of EveryMother, bringing key moments to often wrenching life.  JP Chartier also appears, adding some great comic touches to the show as various men in the ladies lives. 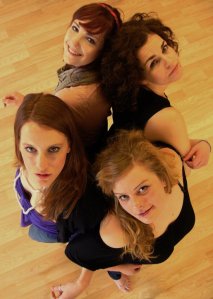 Haines’ story is intriguing and her direction is fun to watch, tho the script borders awfully warily on cliche.  But for me, it stayed on the right side of the line, and I had a pretty damn fun time listening to these stories of pain and growth.  High five, gals.

After a spot of sun and suds on the glorious weekend courtyard, I hit the Library for Black Sheep Theatre’s PLAYING FOR ADVANTAGE.  Directed by local legend Dave Dawson, it’s a sort-of instructional tutorial on how to start, commit to, and then battle to save a relationship, via the surprisingly handy metaphor (analogy?) of Tennis.  Starring the smashing duo of Keith Cressy and Ashley Matthews and moving along with smart dialogue and refreshing chemisty, PFA is a great bittersweet comedy indeed  I wish I could have seen it in a better venue, as much of their clever use of the space was lost on the terrible sightlines of Arts Court library.  But they’re off on the road this year, so maybe there’s hope down the road.

More sunshine, another beer, and not inconsiderable pride as I pushed fellow Fringe superfan Bridget in the direction of SOUNDS FROM THE TURTLE SHELL, before I headed off for my third show of the day (and what would be my final original production of this years Fringe), SOMETHING WITH VIRGINS AND CHAINSAWS.  From Ottawa’s own Insenstivity Training, this was my third Improv show of the Fringe, a personal record.  The theme for this show is horror movies, and the gang goes about improving one from scratch with the help of a few early audience suggestions.  They flesh it out with the help of a mighty pile of props, and their own collective comedy shops, which are plenty.  Some of the pauses between scenes get a little on the long side, and there might be a little overreliance on the props, but for the most part, the gang (including PLAYING DEAD’s Jordan Moffat, among many talented others) had the crowd in stitches the whole time.  My night saw a show about the world’s largest antique store, the mystic staff of Googarah, and a demon-ninja baby who was just adorable.  And happily, Chelsea Stirling was only mildly injured in the ensuing hilarity.

Back to the tent then, where the closing day party was already revving up…wrapped shows were congregating and making merry, letting exhaustion drift away into the cool night.  I chilled  a spell with adorkable ™ Nadine Thornhill and her COMPLEX NUMBERS gang for a bit, before finally settling on a plan. Namely, following the wise sir Richard Hemphill over to the library once more, for the best in venue bonus performance of Rob Gee‘s FRUITCAKE.  Watching Rob go at it a second time was illuminating…he has such a gregarious, easygoing storytelling manner, like a bloke spinning a good yarn to you at the local pub, that it’s easy to overlook his talent.  With the second viewing, and seeing how EVERY line, EVERY movement was identical to the first show, I like the miraculous Mr.Gee even more.  Good call, Richard!

And then…it was over.  Ths shows, at least…of course, I’d long sicne committed myself to drinking til the bitter god-damned end, and so I did.  I don’t THINK I embarrassed myself to badly, but luckily everyone else was just as knackered so likely I won’t get called on my drunken bullshit, should there have been any.  There probably was, to be honest.

Congratulations to all the award winners that night, especially good folks Charlie and Bridget nabbing Spirit of the Fringe.  There was merry, there was dancing, I met Emma Godmere, had good theatre palaver with Duncan Cameron (and I think we’re gonna have more), and somehow made it home in one piece.  That’s it.  It’s over.

…until my NEXT post, rounding all of this magnificent Fringe shit up!  That oughtta stretch my denial out a couple more days, right?  That’s healthy, right..?