Take a ride on the Lavender

This whole ‘reviewing shows’ thing is officially getting a little conflicted.  I mean, it was already becoming odd as I started to know more and more performers…how to remain unbiased about that guy on stage when you just had beers with him the say before yesterday?  And now, it’s even stranger, as for reasons passing understanding, I’ve somehow been fortunate enough to be named as the Front of House Manager for Evolution Theatre‘s  latest show, THE LAVENDER RAILROAD  by Lawrence Aronovitch.   So now, more than ever, the question becomes…how do I maintain my professional, critical detachment when writing my review..?
HA!  That’s a trick question, of course…I never had any of that useless bullshit to begin with!  And now, on with my thoroughly one-sided and goddam rave review of this production, and not just (but okay, partly) because my name is in the program.

My first night was actually their second show (not counting the closed dress), on account of my class at the OSSD (and yes, I know the posts for those have been AWOL..there’s an explanation and catchup coming!).  Having been placed in charge of recruiting volunteers for the production, I’d roped my old classmate Stefan into joining me, and we both showed up at 7, looking quite usherific if I do say so myself.  We were greeted by FamousActressNancyKenny, one of the three grand poobahs of Evolution Theatre, who showed us both the ropes.  I don’t know if were the quickest of studies, but I think we managed to not set the place on fire with a sort of quiet dignity that spoke volumes.  I felt good.

The House opened, and once we got out patrons inside and happily seated, we got to join them.  And, joy of joys, actors were already placed onstage as we went in.  Have I mentioned how much I fucking love that?  Thank you, director Joel Beddows (wouldn’t be the first time I’d thank him this night).  Now, TLR is actually two plays-within-a-play, SAFE HOUSE and EX CATHEDRA (yay, I got them both right this time!!), each taking place in the same linked universe, a cheery version of our world where homosexuality is punishable by death.   Now I know what you’re thinking…Aronovitch somehow got a sneak peek at the new Harper government to-do list (too soon?).  But no, this IS a work of fiction…at least, in our part of the world, and at this moment in history.  And it never hurts to be reminded how bad things could be.

The first story, SAFE HOUSE, stars the dead brilliant Simon Bradshaw as Sebastian, a mathematician involved in the wrong kind of relationship who’s been targeted for death, only to be rescued by the enigmatic (that’s a pun, but you have to see the show to find out why) Mother Courage, played by an almost cruelly-composed Tom Charlebois.  Mother courage is the head, perhaps, of a movement called the Lavender Railroad, dedicated to helping Homosexuals escape to safety whenever they can.  But we soon see that Sebastian’s ‘rescue’ is somewhat fluid, and depending on his use of a never-seen mathematical MacGuffin, might be short-lived indeed.  Charlebois’ poetical Mother Courage, holding all the cards, tries to delve deep into Sebastian’s carefully locked psyche, leading to a very entertaining clash of wills, a search for worthiness over value, and several questions with no easy answers.  Simon’s slow crumble into desperation over the course of his maddeningly polite interrogation is great to watch.

The first piece segues neatly into the Railroad’s second stop, EX CATHEDRA, where things actually manage to turn up a notch.  Starring Maureen Smith as a commander of the ‘Security Services’ dedicated to hunting errant homosexuals, and Beverly Wolfe as a Nun (or Sister, as she insists) bookkeeping for a Papal visit to Japan, the whole space fills with tension almost instantly upon Bev’s appearance with Maureen.  Seems she and the Commander have a bit of a past (read: one whole heaping lot of past) together, and, having rediscovered one another, the Commander has reasons to bring the Sister back into her life.  What follows is a joy to see, as Maureen Smith’s bold and defiant Commander volleys and parries with Bev Wolfe’s controlled and cunningly diplomatic Sister Frances, using their long-buried feelings as a weapon.  You’re rarely sure from one moment to the next which of them has the power in the scene, which makes it perhaps the more interesting of the two plays.  It’s certainly an all-too rare opportunity to watch two amazing actresses clash like that onstage, and especially at such length.  Mahvellous. 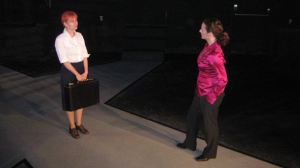 The whole play is linked beautifully by Margaret Coderre-Smith’s gorgeously simple set in the reworked studio space, not to mention more of Al Connors stunning sound design, accentuating the mood at every turn.  And that final shot..?  Fuck me, but I love a good closing shot in theatre.  Beddows…ya nailed it.

There was a talkback after that night, with members of the Iranian Railroad for Queer Refugees (a real life, and sadly necessary, Lavender Railroad), which I unfortunately didn’t manage to hear, but they may be back.  I hope so.  And for sure, for SURE, if you haven’t seen this show yet, GO.  Or should I say come, because in all likelihood I’ll be there already, waiting to sell you your ticket.  Is that not ENOUGH reason to check it out?

No?  Fine.  it’s awesome, there’s your reason.  I’ll see you there, yeah.  Oh yeah.  Peace, love and soul from the Front of house,