She, themselves and I

Missed a couple of potential theatre days this week, mostly on account of I wanted to spend some hang time with Winston the cat.  He likes his cuddles, and who knows how much longer I’ll have the little fuzzball?  Gotta get my kitty playtime in while I can.  But, as I say, I’m missing the odd show here and there (not that my wallet minds).

So it felt good to get out to yet another of the shows hitting the capital tonite, this one back at the mighty Gladstone Theatre, the world premiere of David Hersh’s I.  I always enjoy hobnobbing at the ‘Stone (Especially with its future so uncertain), and man, was I all goofy and starstruck tonite…the famous people were comin’ outta the woodwork!  I spotted Celine Fillion (who did double duty at this year’s Fringe Festival), Margo Mac of SHADOWS awesomeness, Ken ‘The God’ Godmere…and look, there’s Gauthier!  And Kate Smith!   Emily Pearlman!  Richard Gelinas even! 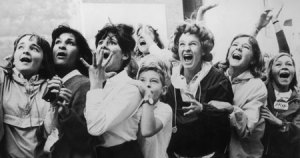 …pardon, I need a moment to wipe all these stars from my eyes.  Sometimes, I do indeed revel in my geek awe.  I guess even these guys and gals have heard the already-considerable buzz for this show, just a couple days into its run.  So at least I could say I was in pretty killer cool company when the lights went down on the sparse set…a room, occupied by a desk, an armoire, and a bed.   Simple, plain…and ready for just the slightest bit of tweaking.

Enter our heroine, played by the ridiculously pretty and talented Emmanuelle Zeesman, who I’d previously swooned over in THE ANDREWS BROTHERS at the ‘Stone (and who also just won a Capital Critics award for being smooshingly fantastic…look it up!).  The concierge, played by Kathi Langston, leads her into her new flat in Paris, where Emm’s character has come to write the world’s greatest play.  But there are a  few odd leftovers in the apartment from the former tenant, a famous playwright our heroine idolizes.  A typewriter, some books, and a student’s uniform our heroine quickly dons, before the concierge leaves with a cryptic warning.  Then, a knock on the door, and things start to go gloriously weird.

Enter the darkly cloaked Andy Massingham (who directed the aforementioned ANDREWS BROS. show) as the titular ‘I’, apparently the believed-dead playwright returned to give our girl some lessons in writing.  And he comes not alone.  Speaking in an occasionally Joycean torrent of words, and twisting logic to his own purposes, I is slowly joined on stage by one, then another, and ever more dark robed iterations of himself, forming a chorus that echoes his advice/madness to the ever stressed heroine.  The set itself cracks and widens, the walls move (in a wondrous bit of theatre magic you’ll miss if you’re not paying attention) and the hero worship that starts this strange relationship off turns sinister, smothering, hilarious, loony, and downright amazing to behold.  When the trombone comes out, all bets are officially OFF.

David Hersh, the writer and director of this gem, deserves a heaping helping of praise for pulling this show off, and so well.  The language and wordplay ALONE is giddy fun, the choreography must have been a special kind of nightmare (shoutout to choreographer Patricia Allison…nice one!), and the play as a whole works beautifully on a few diff’rent levels, and left me thinking plenty after it was over.  It’s an intriguing cautionary tale for would-be writers, and maybe the best show I’ve yet seen at the Gladstone.  Honestly, I wish I could manage to see it again.  It’s definitely that good.  If you haven’t already,  do yourself a favour and check it out.

Right, I gots to get me to bed…early rise for brunchwork tomorrow, and then maybe ANOTHER show that evening.  Sock’n Buskin, anyone..?  Well anyways, get out and see some shows, ‘kay?  It’s good for your spleen (science fact!)  Peace, love and soul, everyone,