A quick aside to start this entry off…a couple days ago I read a review in the Ottawa Citizen of Barry Smith’s Fringe show EVERY JOB I’VE EVER HAD, by one Patrick Langston.  It was a negative review.  It was snide, and rude, and quite deliberately nasty.  A highlight is when Langston mentions how some’ others’ in the audience wished Smith would just have become an accountant, presumably instead of a performer.

Now, you don’t like the play, you don’t like the play, whatevah.  But if you’re gonna be a bitch about it (and a cowardly bitch at that, attributing your insults to nameless ‘others’ instead of fucking owning them yourself), then may I tersely retort, messr.Langston, that you are a bad, bad man, you ain’t got no class, and I hope zombie squirrels eat you alive from the toes on up.   With little, tiny spoons.  Jackass.   Bein’ mean to Barry Smith..?  Not on my watch, fuckface.

Anyways.  On with the show!  I see from my obsessive watch on the stats counter that I’ve gettin’ some traffic over here.  Cool…but comment or something, willya, it’s creepy you just standing and staring like that.  Besides, that’s MY schtick.

Oh, and I was late for work today.  Saw THAT coming.  Don’t worry, all was well, and I’m still gainfully employed…which is lucky, as I bought another 10-show pass today…no ‘media pass’ for your poor, beloved Visitor, oh no.  I’m right there in the cheap seats with YOU, gentle reader.  Unless of course, you reading this in fact HAVE a media pass.  In that case, fuck you, reader, you spoiled bastard.  Later, though…there’s important stuff to get to.

Like the first show of tonight, LOVE IN THE TIME OF HARLEQUIN, from the good folks at Troupe de la Lune.  A short, quick-tongued comic piece riddled with bodice-ripping one-liners and a showload of sexual dysfunctions and frustrations.  It’s a feel-good dandy of a piece, well worth a viewing, and may even make you rethink your views on swords and gardens.

Next came one I wasn’t sure about, the mysterious MEN TELLING STORIES.  I didn’t know what to expect…but should have learned by now that ignorance is often a crucial ingredient for AWESOME.  Matt and Peter, the hyperactive storytellers at the heart of this comic /musical/self-help seminar tour de force, are two theatre buddies who have taken it upon themselves to help rid the world of excessive douchebaggery through the stage, and more power to them.  They had the audience in stitches of glorious comedy pain, and I can’t say a single bad thing about it.  Except, perhaps, for the annoying intrusion of loud music from without, threatening to drown the lads out…was it the Franco-Fest, I wondered, causing us auditory grief once again?

I found out when I left and wandered past the courtyard that, no, Franco’s wasn’t the fest we had to blame…it was THIS one.  Some jazz/lounge musical ensemble in the tent were playing, and they had everything cranked up to 11.  Now, I’m a punk rock man of old, so loud music doesn’t bother me per se…but do we REALLY need it so cranked in the courtyard I couldn’t even order a drink and still be heard?  When by doing so, you’re actively sabotaging the theatre space directly facing the stage??
It’s Fringe, guys, not Bluesfest.  Turn it down a shade, and let the players PLAY already.  Sheesh.
Where was I..?  Oh yeah, on to show number three.  This one had good buzz, so I had cautiously high hopes.  The premiere of THE SPUTNIKS, Elison Zasko’s one-woman show about a family of Russian Jews escaping the Motherland, with Canada their ultimate goal.  This one’s directed by madman and genius Jonno Katz, so it comes with a good pedigree.  As it started, Zasko was playfully weaving around the audience, handing out Gummi Bears, and generally being a good host.  What happened next… 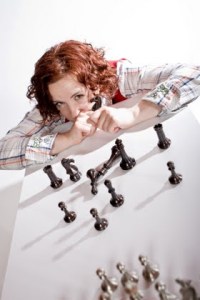 It’s sometimes, if not always hard, to explain to someone just WHY you love theatre so much.  How it can affect you, what it does to you.  See The Sputniks, and you’ll know why I love theatre.  I laughed, smiled, marvelled at the performance she wove and, after it was over, I walked away to a quiet and dark spot to be alone, and I fucking cried.  THIS is why I love theatre.  Elison Zasko…damn.  I will adore you always, EZ, and be a fan forever.  Thank you.

So I needed a bit of a respite after THAT ride, and what better way to wind down after a tough day at the office than with a little razzle dazzle?  Yes, it was past time for Prairie Fire’s BURLESQUE UNZIPPED, one terribly charming woman’s guided tour through the much-ignored history of that great and misunderstood theatrical tradition.  She dances, informs, cracks a whip and may even blow your mind a little, if yer willing.    The Fire puts on a wicked fun show, and the final routine is pure magic (to say nothing of the use of ROCK BANG to play herself out…awesome).

Just a short stint at the beer tent for me this evening…it was a little chilly, and I was still a little burnt out from SPUTNIKS.  So I made my leave, got myself a nice bowl of Pho at home, and settled in to write this here thingamabobber and head to bed.  A very, very good night.  I’m making it official.

That’s it for day five…thanks again for all the traffic, and I hope those of you reading all this nonsense are getting some enjoyment out of it.  I’ll see you in the beer tent, keep on Fringing, and if you’re mean to Barry Smith I’ll put an exploding brick up your ass.
Yer pal as always,
The Visitor﻿